626 Night Market Season is Over,

Here are My 2014 Food Favorites
(Not in any order) 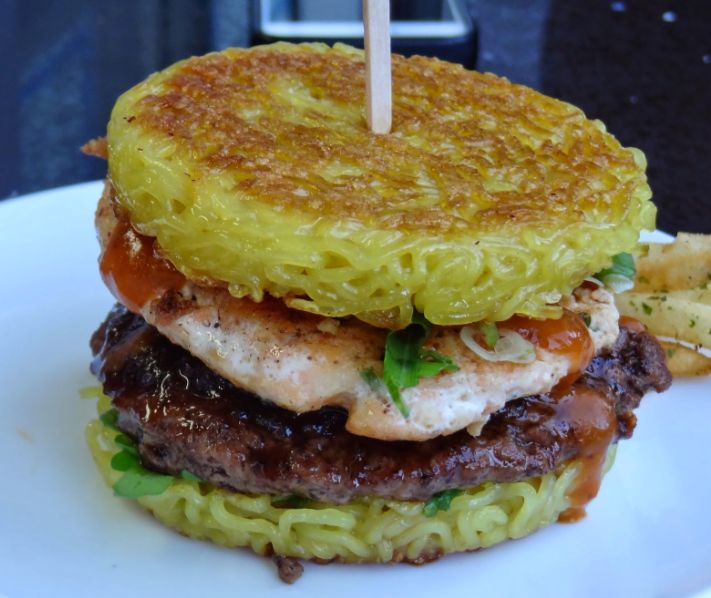 The Specialty Ramen Burger
at the July 626 Night Market

As most of you know, I'm friends with the creator of the original
Ramen Burger, Keizo Shimamoto, and a fan of his creation.
I've tried each of the specialty burgers and my favorite is the
Surf & Turf with an Angus beef patty and a salmon patty
(this one had La Sriracha Macha too - see below).

See the background story on the Surf & Turf Ramen Burger
and checkout their first L.A. brick and mortar location
HERE 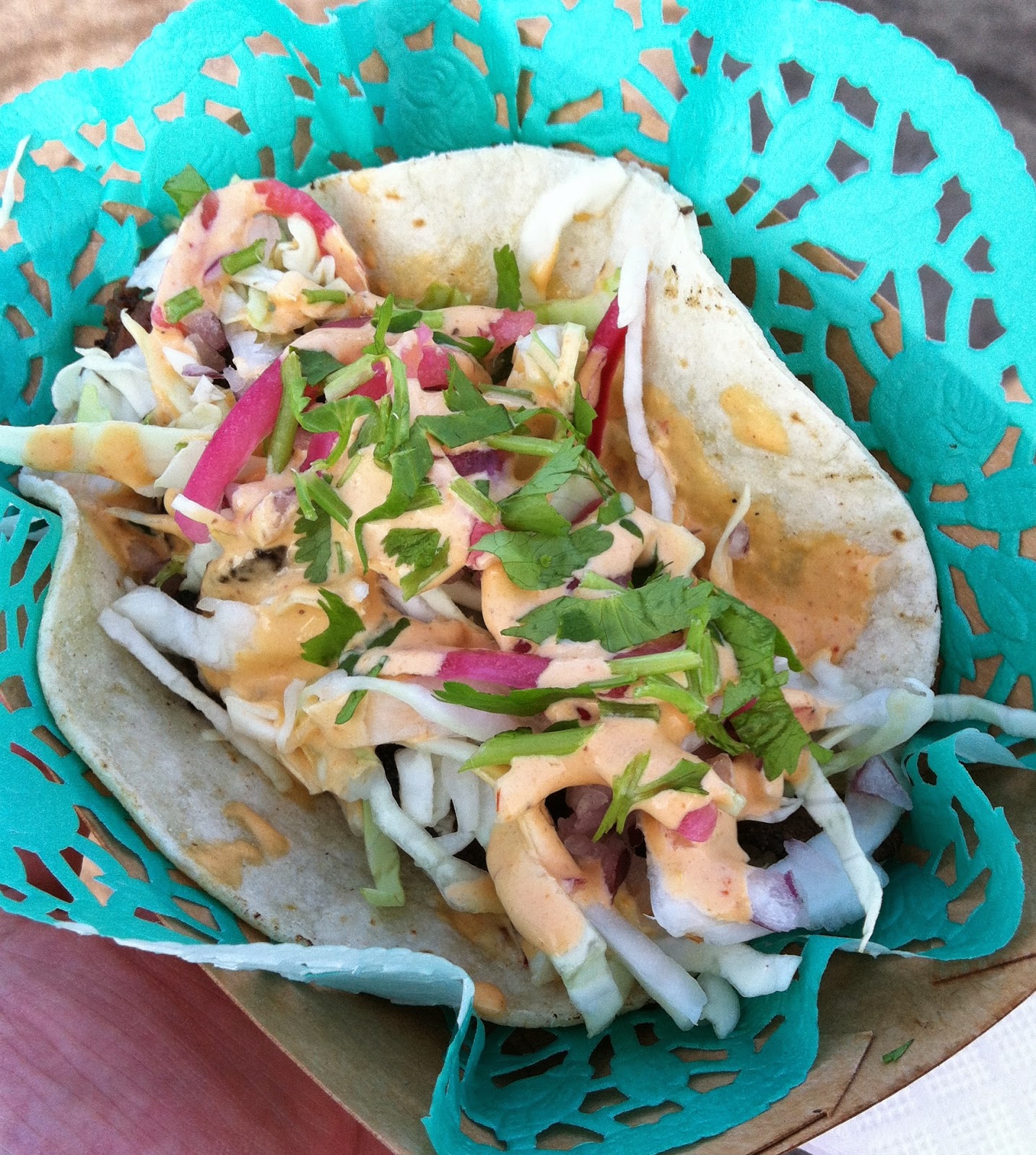 One of two Rainbow Tacos
from Oh Thit! at the
September 626 Night Market
and October OC Night Market.

IMO, Oh Thit! has one of the best skewers at 626 Night Market.

A lemongrass grilled pork with fresh cabbage, onions, cilantro,
and topped with the special Oh Thit sauce on corn tortillas.
The lemongrass pork has great flavor and the Oh Thit sauce
has a nice kick on the finish.

If you're not in the mood for tacos, try their filet mignon skewer
or roasted corn with scallion oil. 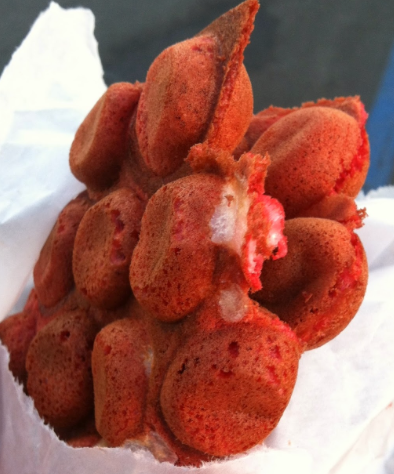 From Puffect Bakery Cafe
at the September 626 Night Market

I'm not really a fan of Red Velvet, but Puffect Bakery Cafe made a
believer out of me.  They suggested adding mochi to my waffle,
to my surprise,  it was really good.

Honorable Mention goes to their bubble waffle with  Banzai Jerky's
Bacon Jerky.  I was going to share it with others,
but ended up eating the whole thing myself.

Visit Puffect Bakery Cafe at their store in Walnut. 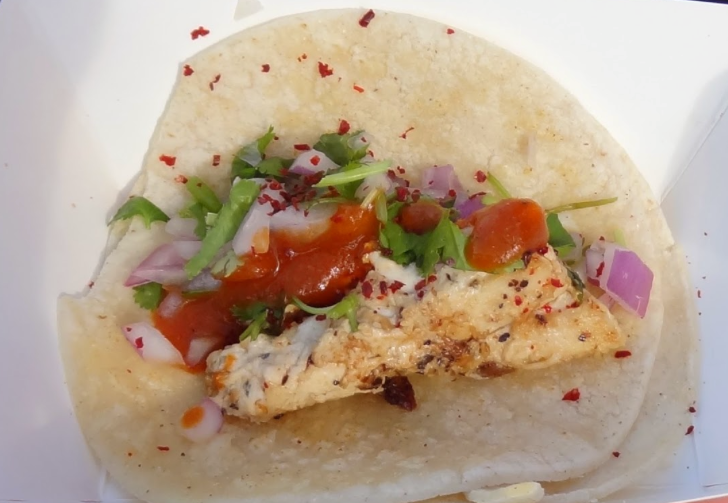 From the makers of La Sriracha Macha,
the Shark Taco from the July and September
626 Night Market in Arcadia.

I LOVE tacos and what goes better with a flavorful Asian and Mexican
Sriracha? How about...SHARK!
Thankfully, it wasn't something heard at the beach.
Shark is one of those proteins that if over-cooked, it gets really dry fast,
but Lincoln Lee (La Sriracha Macha creator) knows how to cook shark.
It went really well with their sauce.

Now that the Night Market season is over,
you can buy La Sriracha Macha online HERE 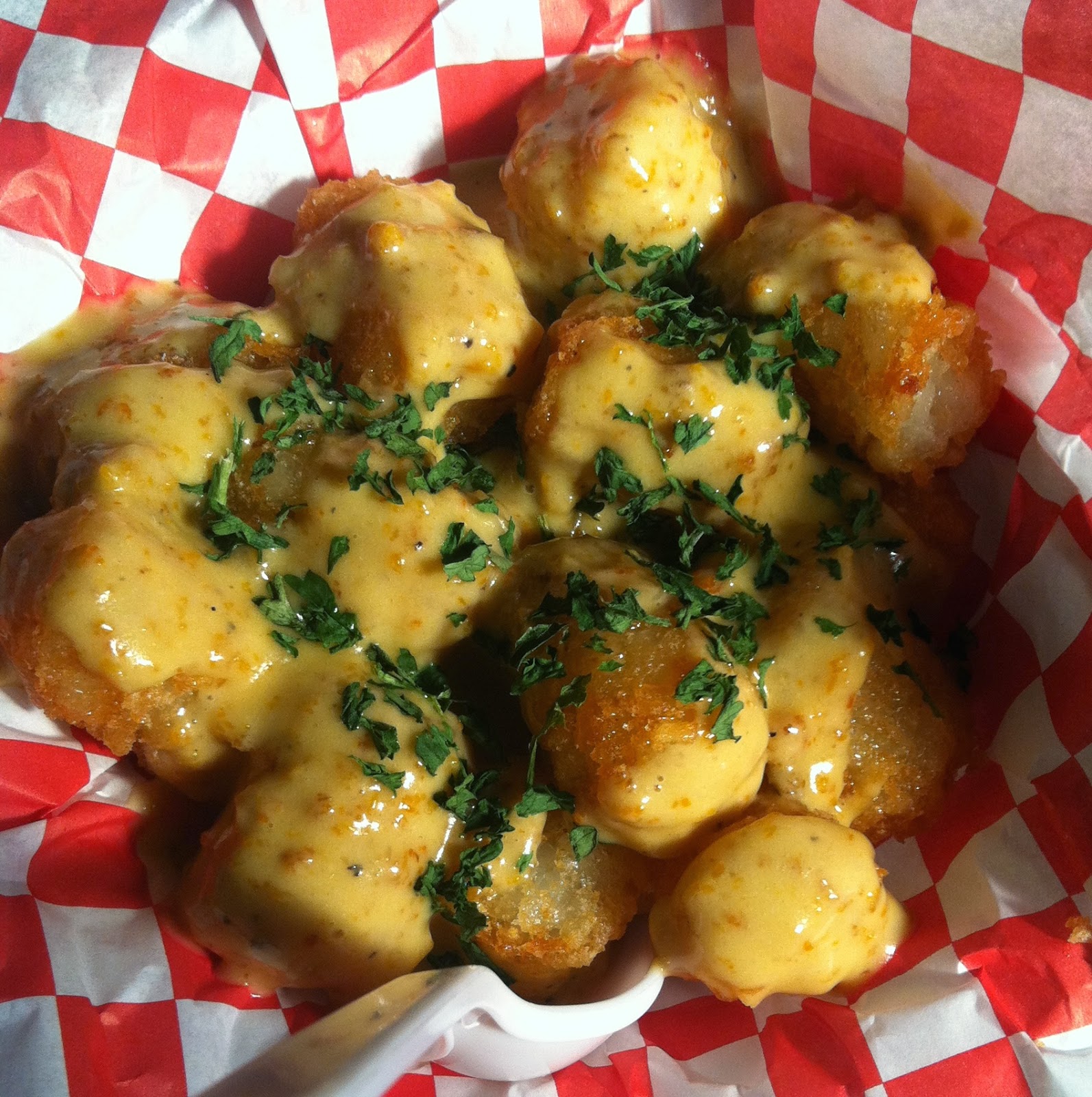 From Lotza Tots
at the DTLA Night Market

Just before the DTLA Night Market in June, I wrote about using
social media to look for food finds at the Night Market.
See my Night Market Survival Guide HERE

Since I was working at one of the booths, I didn't have time to
walk around like I usually do.  So I took my advice and saw
a few people talking about the tater tots with uni cream.
I'm glad I tried it and loved their other menu items. 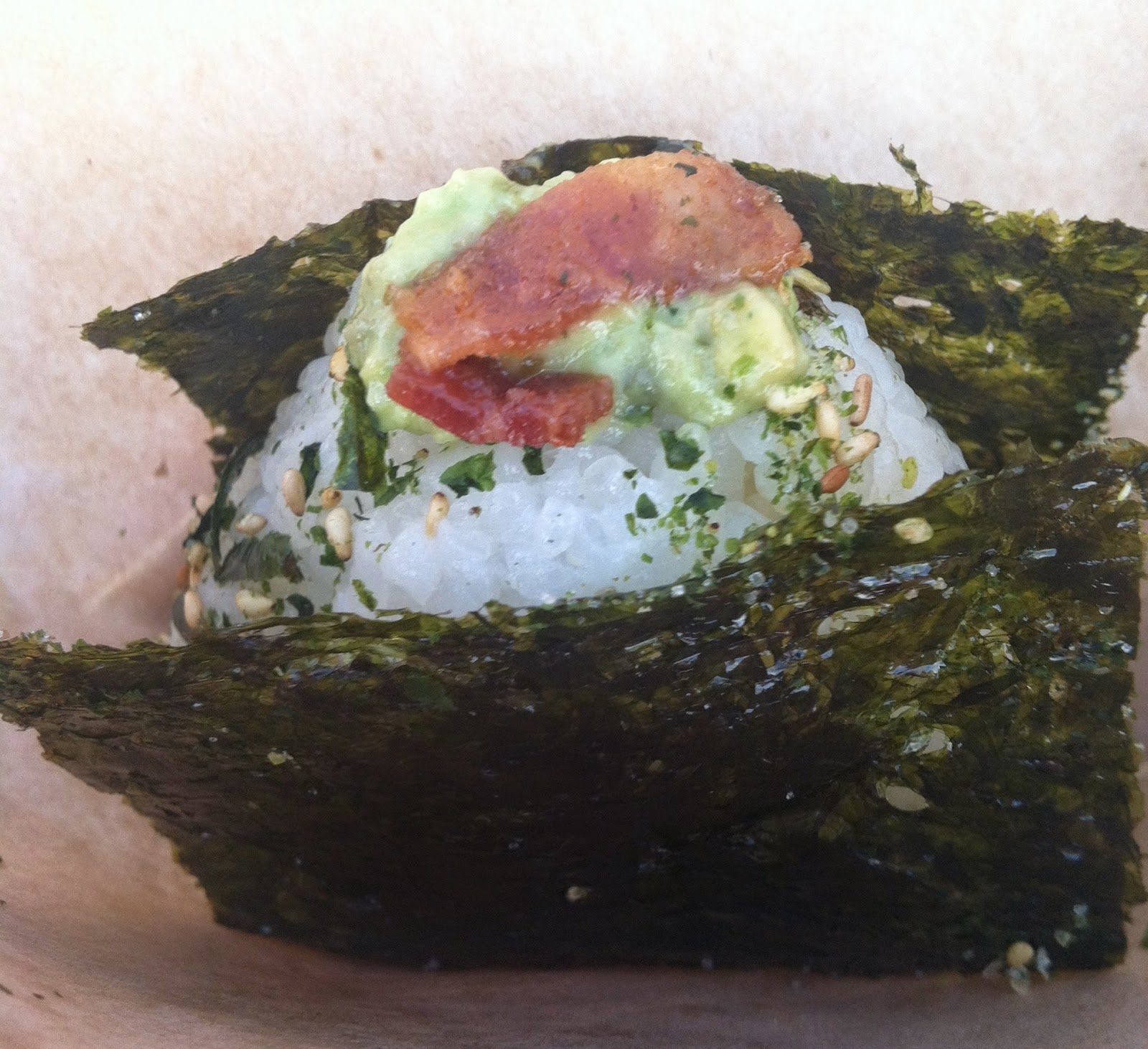 From Mama Musubi
at the July 626 Night Market

I've been a fan of Mama Musubi and have been fortunate
to collaborate with them.  They use quality products in their
musubis and have a variety of non-traditional fillings.

It was a hard decision to pick my favorites, but knew this musubi
needed to be on the list.  The Crack Bacon & Avocado musubi
stuck in my mind.   Sugar and spiced caramelized bacon served
with avocado aioli AND who doesn't like bacon??? 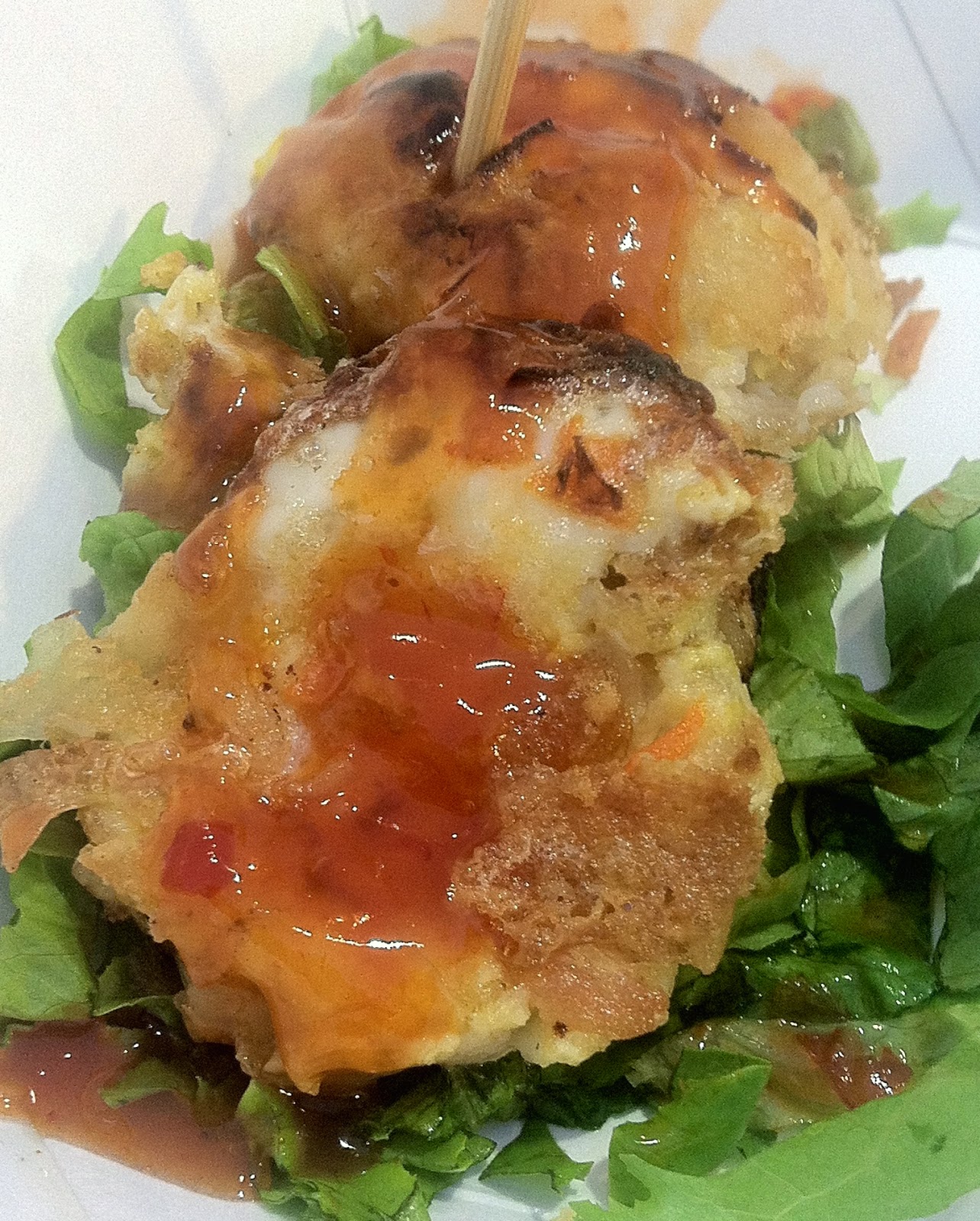 From Pop'd Up
at October OC Night Market

Mussels in a fried batter, reminds me of something similar to takoyaki.
It was delicious and a complement to their Thai desserts and drinks.

If mussels aren't your thing, try their mixed seafood.
Each was very good and while you're there,
checkout their traditional Thai popsicle maker. 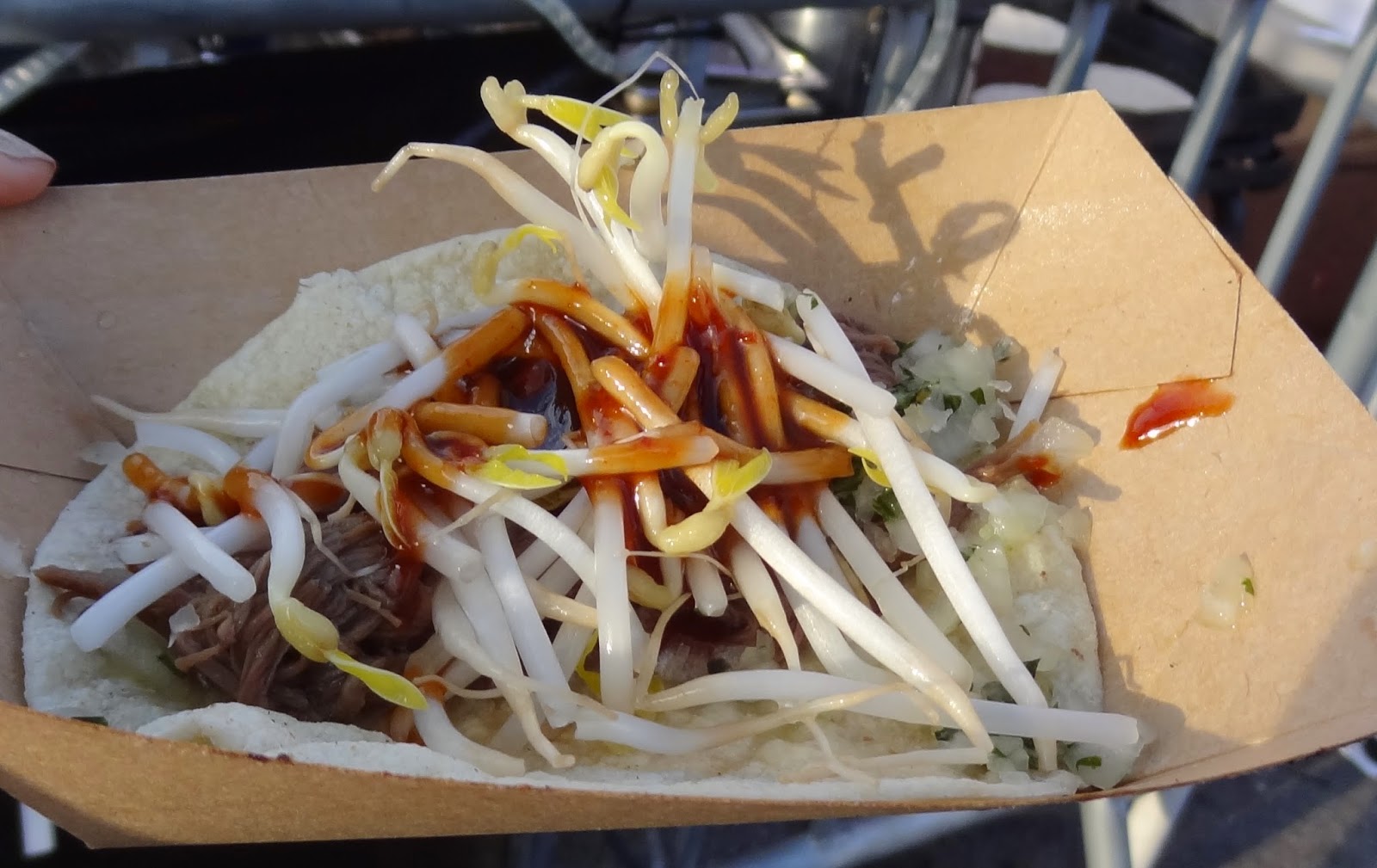 If you follow me, you know I LOVE pho!
It tasted like pho, but in a taco. 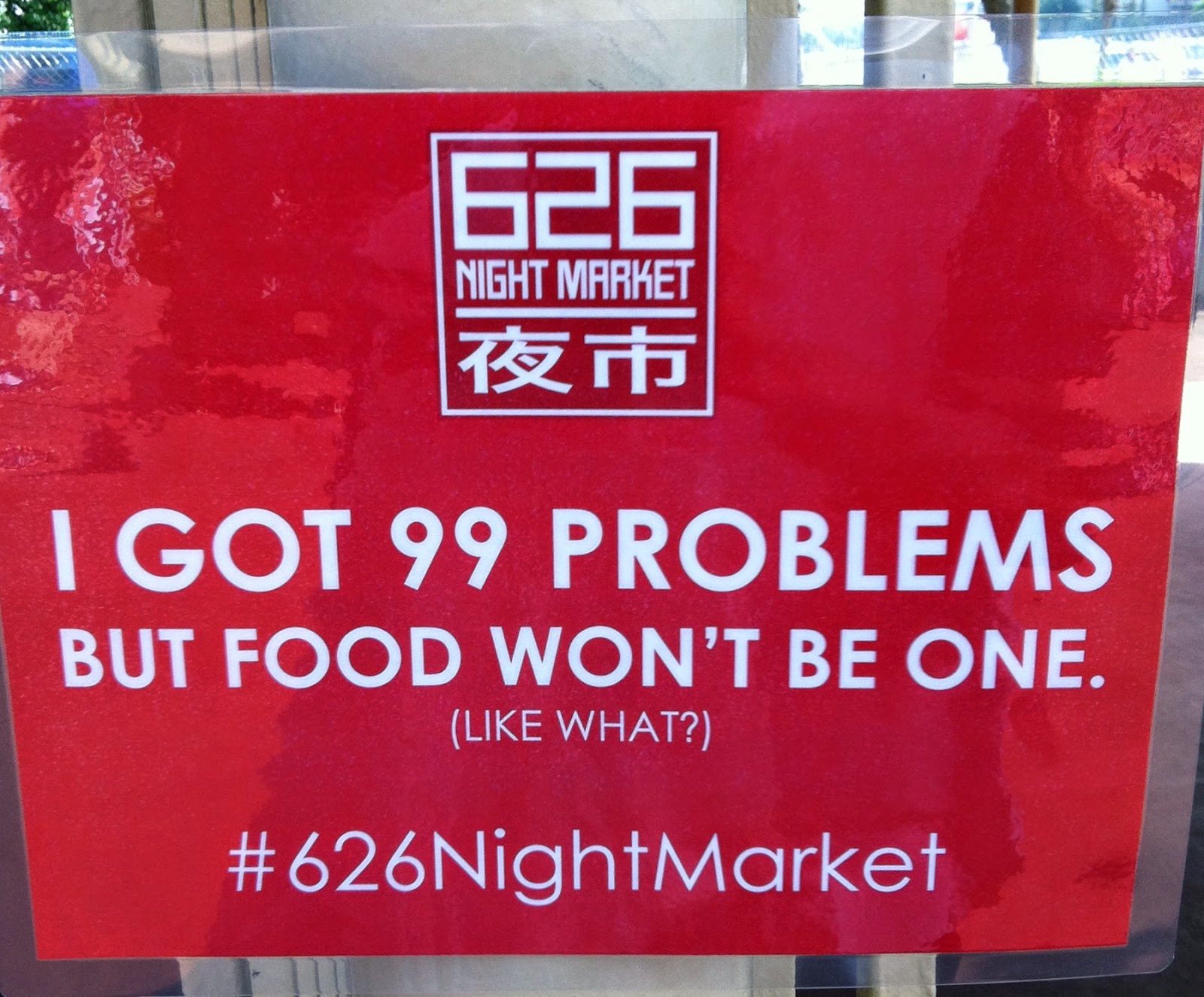 Honorable Mentions
They're just as good... 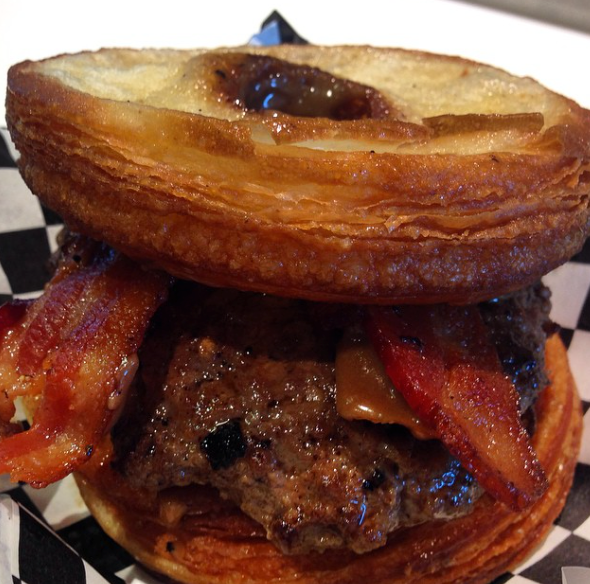 Thanks to Kelsey at Pop'd Up, got to meet Chomp Eatery
and tried their Maple Bacon Croissant Donut Burger.
I've had donut burgers before and they taste like a
donut burger.  But Chomp Eatery used an inverted
croissant donut with good products.  The maple bacon
got me to try and I was SOLD!

It was so good, will have to visit Chomp Eatery at their
Santa Monica location for another one. 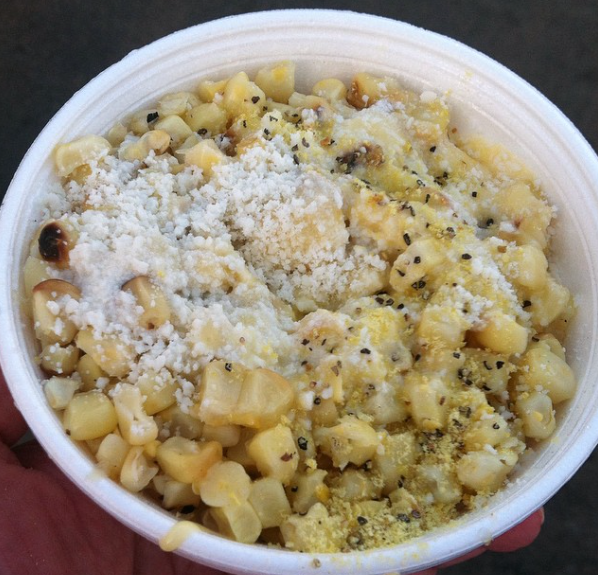 From Roasted Corn
at May and October OC Night Market
and July, August, and September 626 Night Market.

When I think of summer festivals, I think of corn on the cob.
So simple, but it reminds me of summer and growing up
in Los Angeles.
Elote or Mexican style corn, I like mine with mayo, butter,
cheese, and I add some lime juice and other seasonings.
It's not anything special, just good in my book.

Corn with a C! 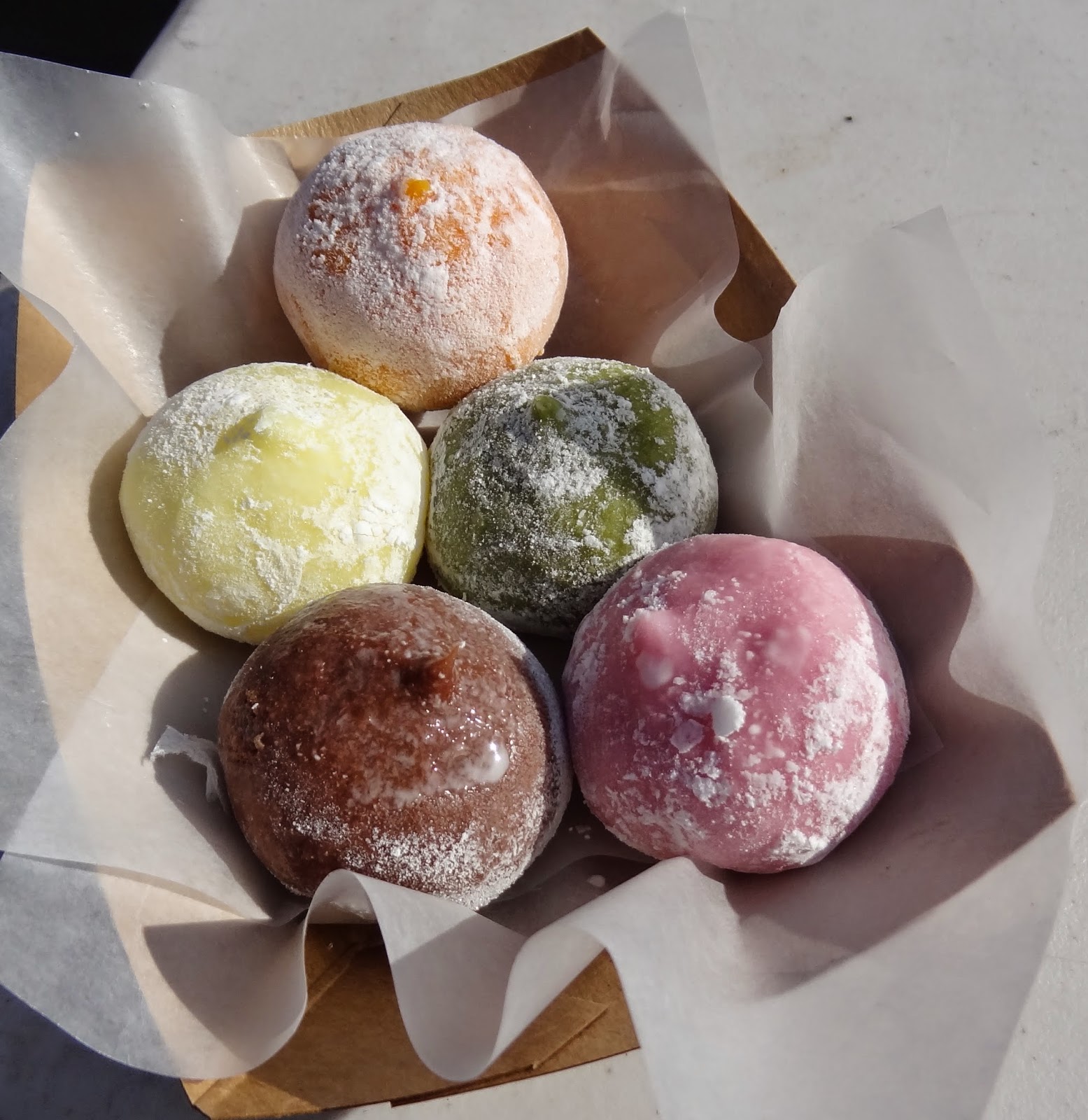 From Mama Musubi
at the July and August 626 Night Market

These mochi coconut cream puffs made their Southern California
appearance at 626 Night Market in Arcadia at Mama Musubi.
They're about the same size as mochi ice cream, but instead
of dairy, it's coconut cream (so no dairy) and VERY GOOD!
They come in 5 flavors, mango, yuzu (Japanese citrus),
green tea, chocolate, and strawberry.

Maybe Mama Musubi will have them again in the future. 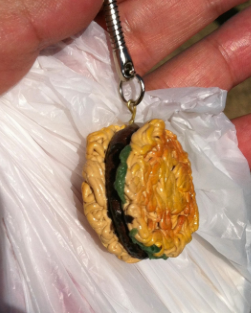 From Ramen Burger
at the May OC Night Market

May the Ramen Burger be with you Always!

Get one at their L.A. brick and mortar location
at Vermont and 3rd in Koreatown.

More info on the brick and mortar opening HERE 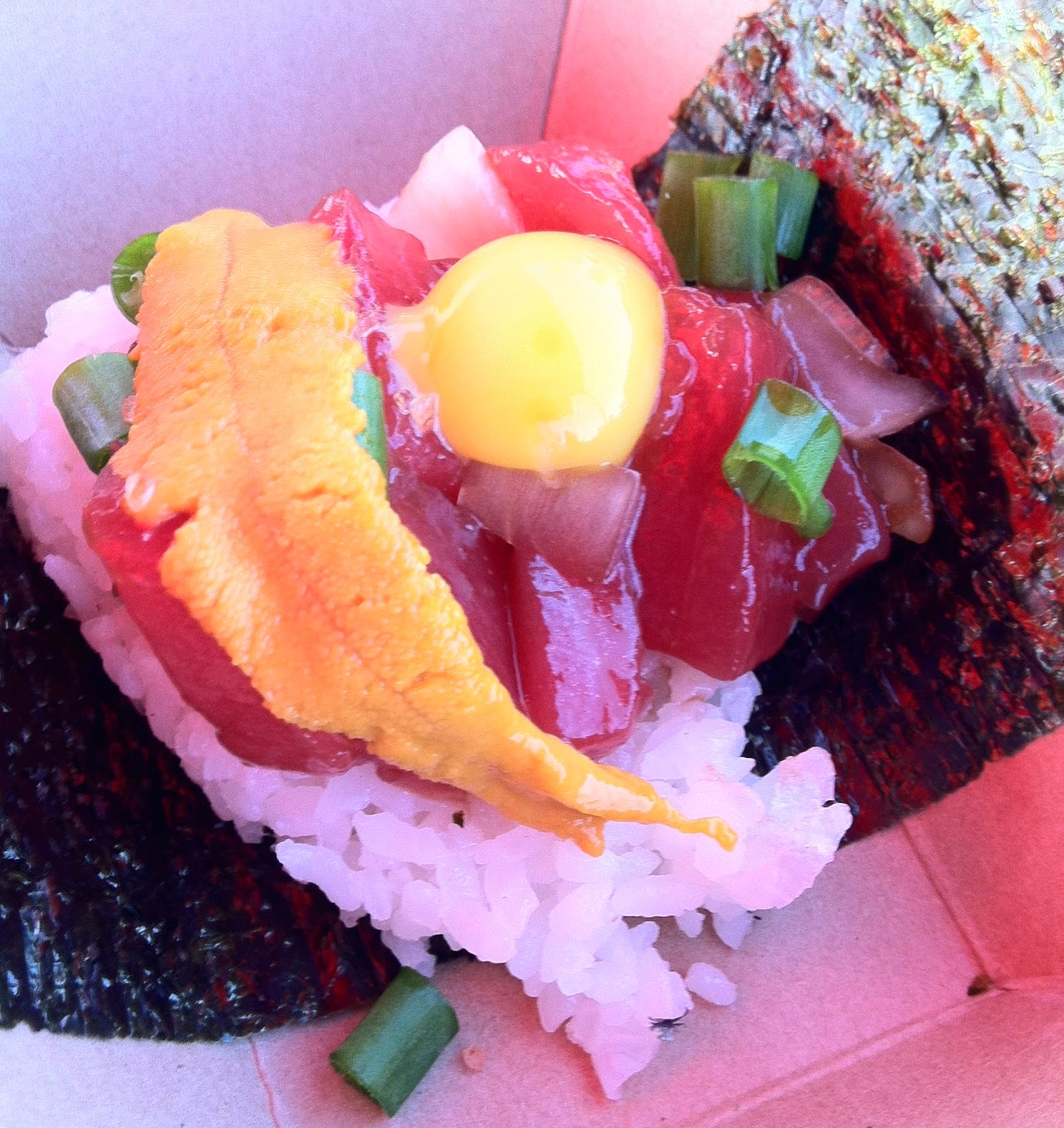 It was a hit with customers AND of course,
it was one of my favorites...
(YES, I'm Bias!)

What could be better?  Ahi poke
with uni and a quail egg.
Nuff said...

NOTE:  I've collaborated with Mama Musubi on a couple of menu items.
They were kind enough to open their kitchen and we were able
to create some good stuff and I thank them for the opportunity
to work with them and their staff.

I hope you were able to attend one of the 2014 626 Night Markets,
either in Arcadia, Orange County, or in Downtown Los Angeles.

With over 130 food vendors, there's something for everyone.

One reason why I love street food is
being able to sample a lot of food items
all in one place.

Thanks for Following
and
See you in 2015!