Los Angeles has a lot of ramen places.  Depending if you like tonkotsu (pork broth), tsukemen (dipping ramen), or even a good shoyu (soy sauce), everything comes in a bowl.

Last year, Keizo Shimamoto created a ramen item that you can eat without a bowl.  His creation, what I call "An American Spin on a Japanese Classic", was introduced and people lined up for this new ramen item.  Not just lines in New York and Los Angeles, but in Hawaii people showed up hours before the pop-up opened...  There are a lot of copycats out there, my cousin showed me an ad for one yesterday, I had to tell her it's a knockoff.  Well, the Ramen Burger West Coast now has a L.A. home! 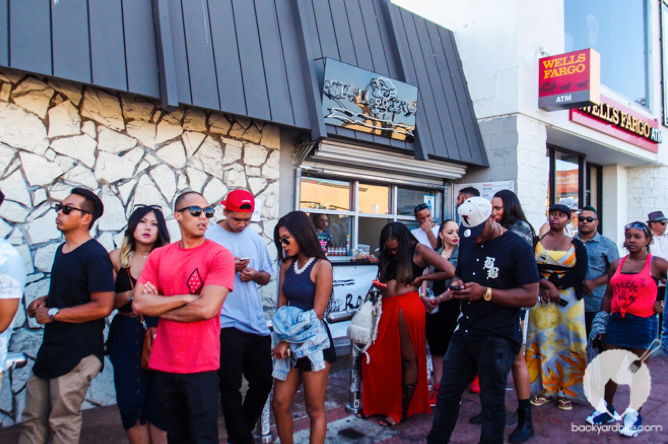 Photo Courtesy of Backyard Bite
Behind the line at Lock and Key
is a small service window. 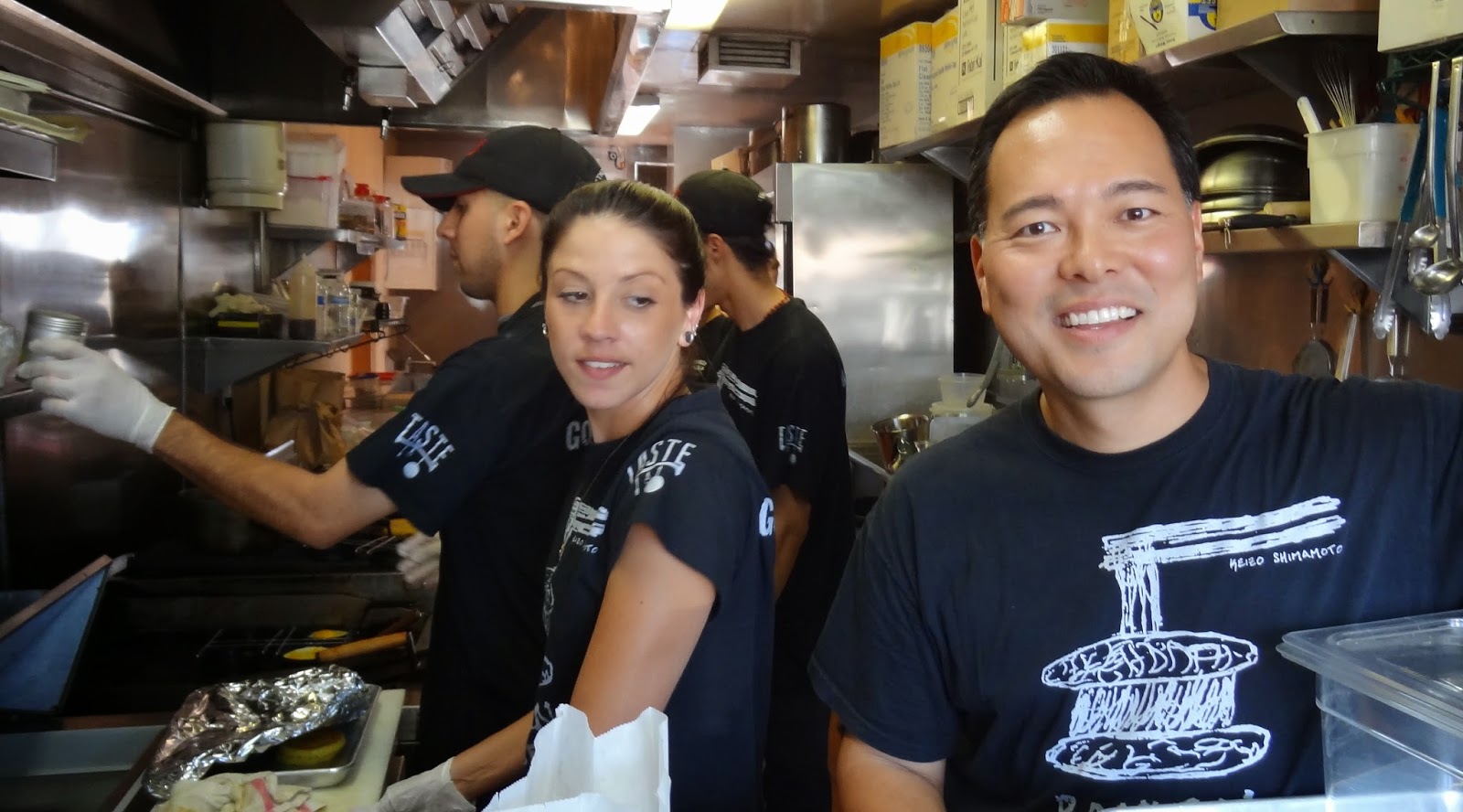 Jeff Shimamoto (Keizo's brother) invited us to
meet the crew and see the behind the scenes of
this new brick and mortar location in KTown. 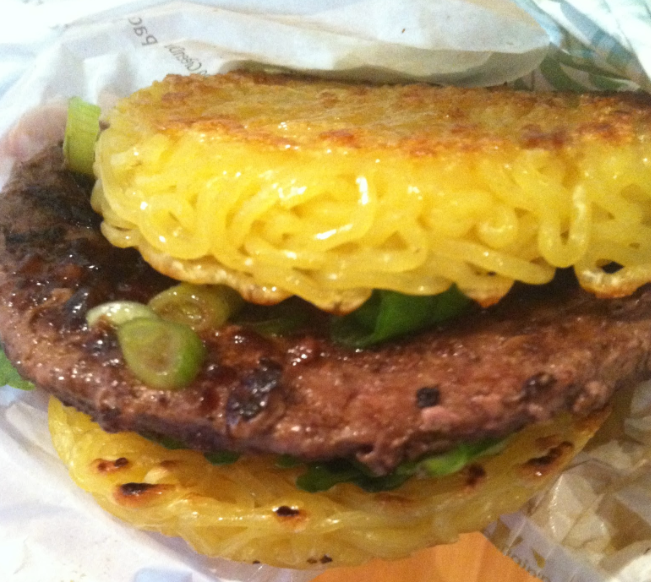 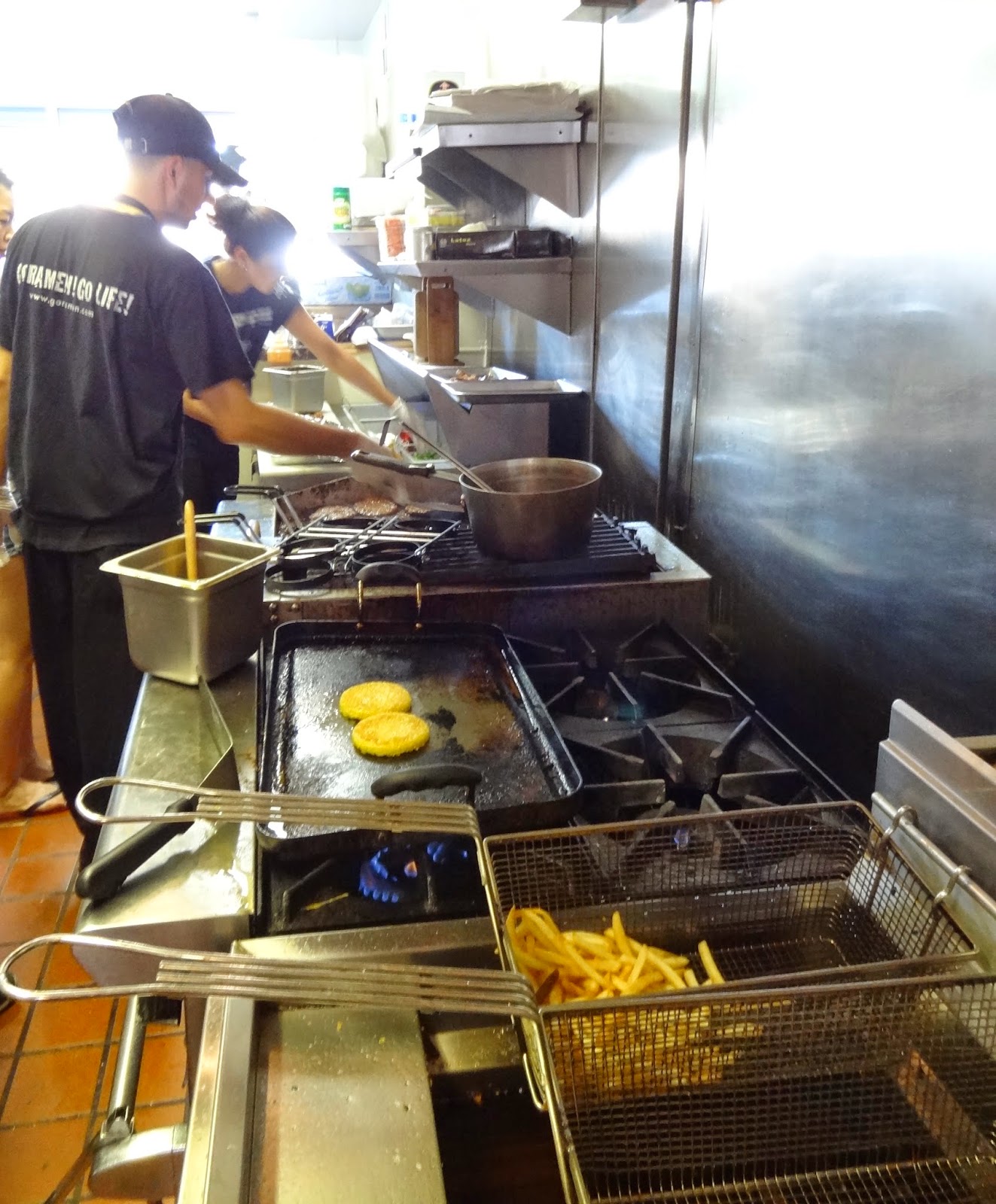 But I was really interested when Jeff told
me about their latest creation... 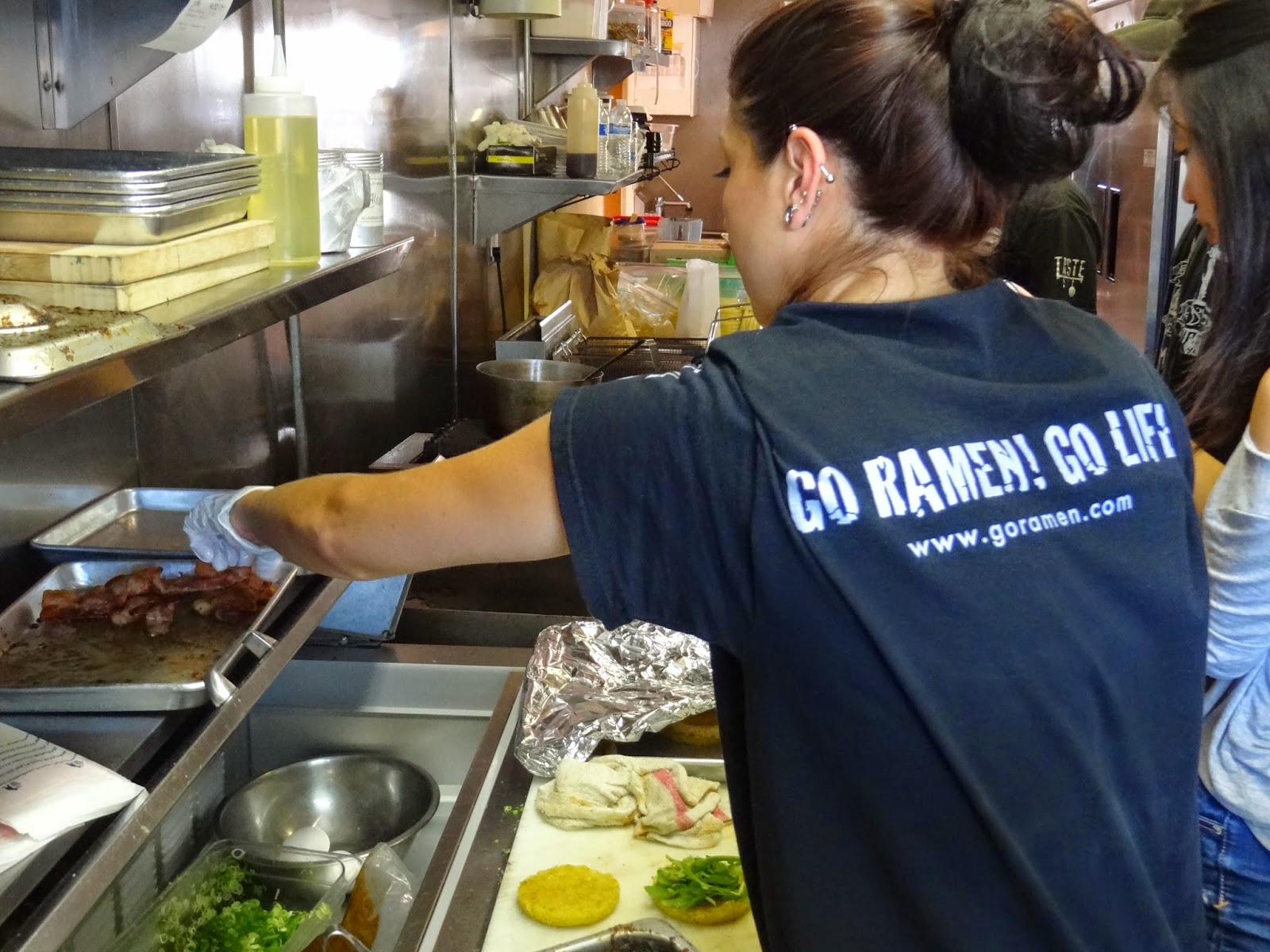 The special Ramen Burger being assembled for us. 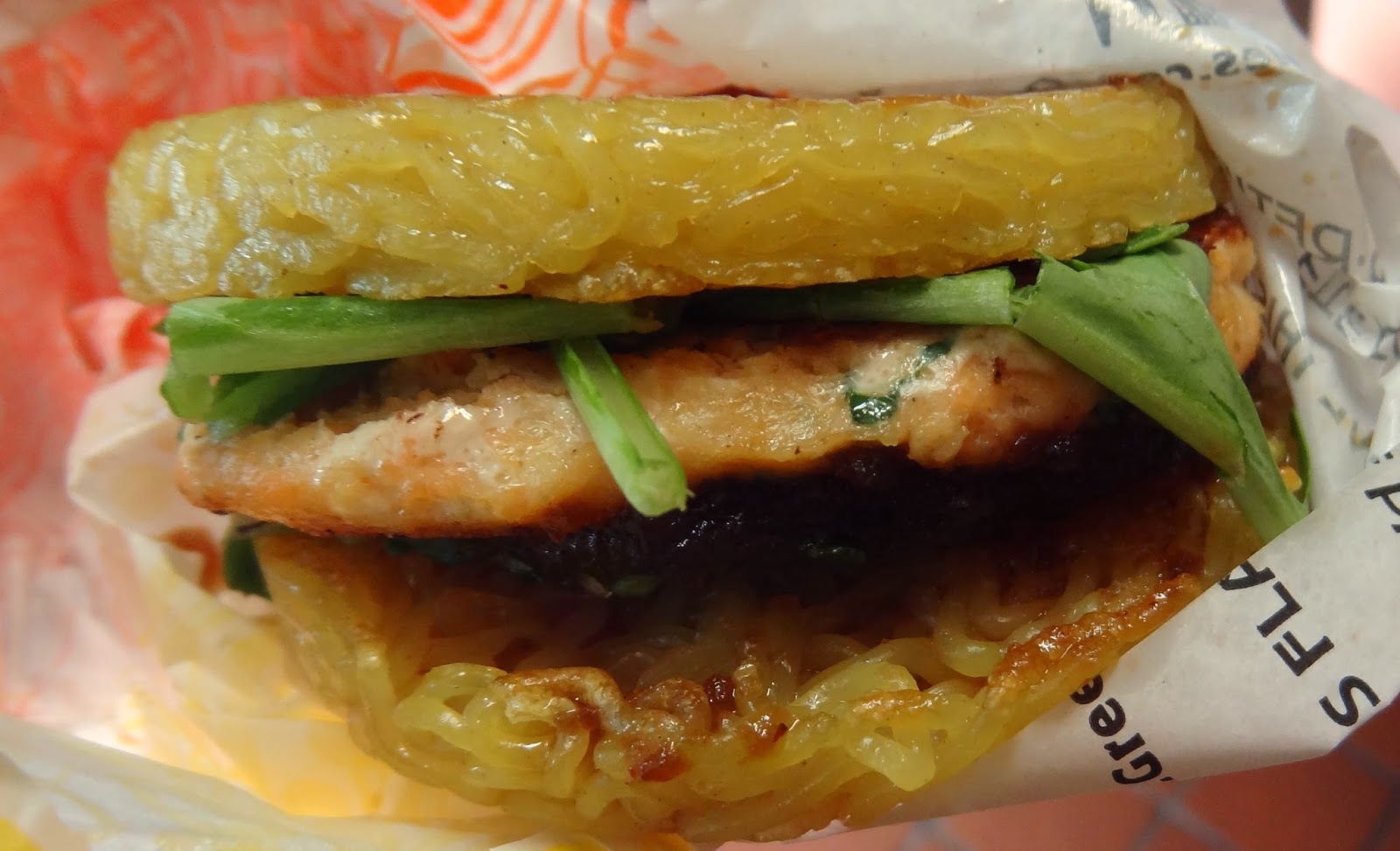 This is a great alternative and still can
enjoy the flavors of Keizo's secret sauce. 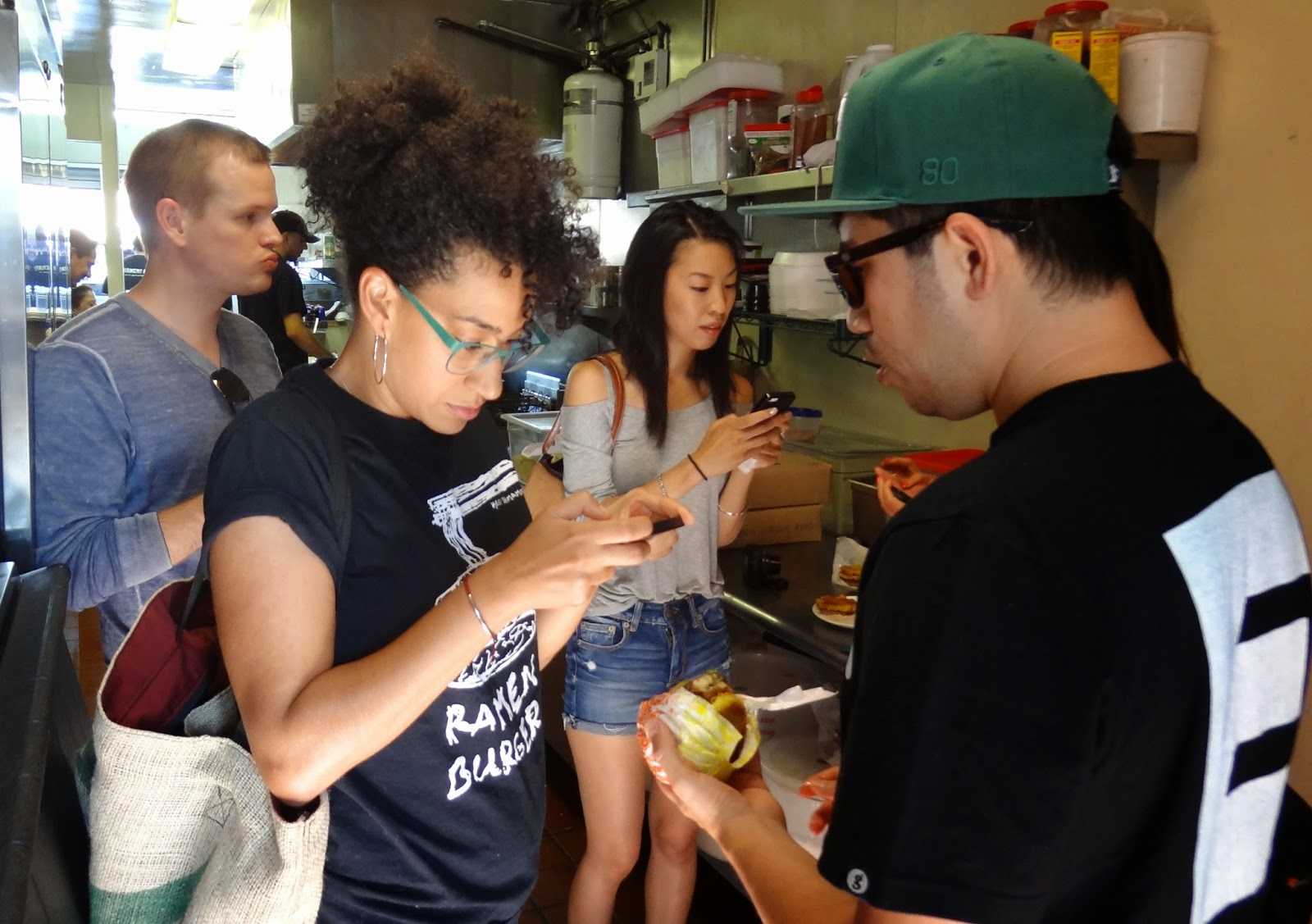 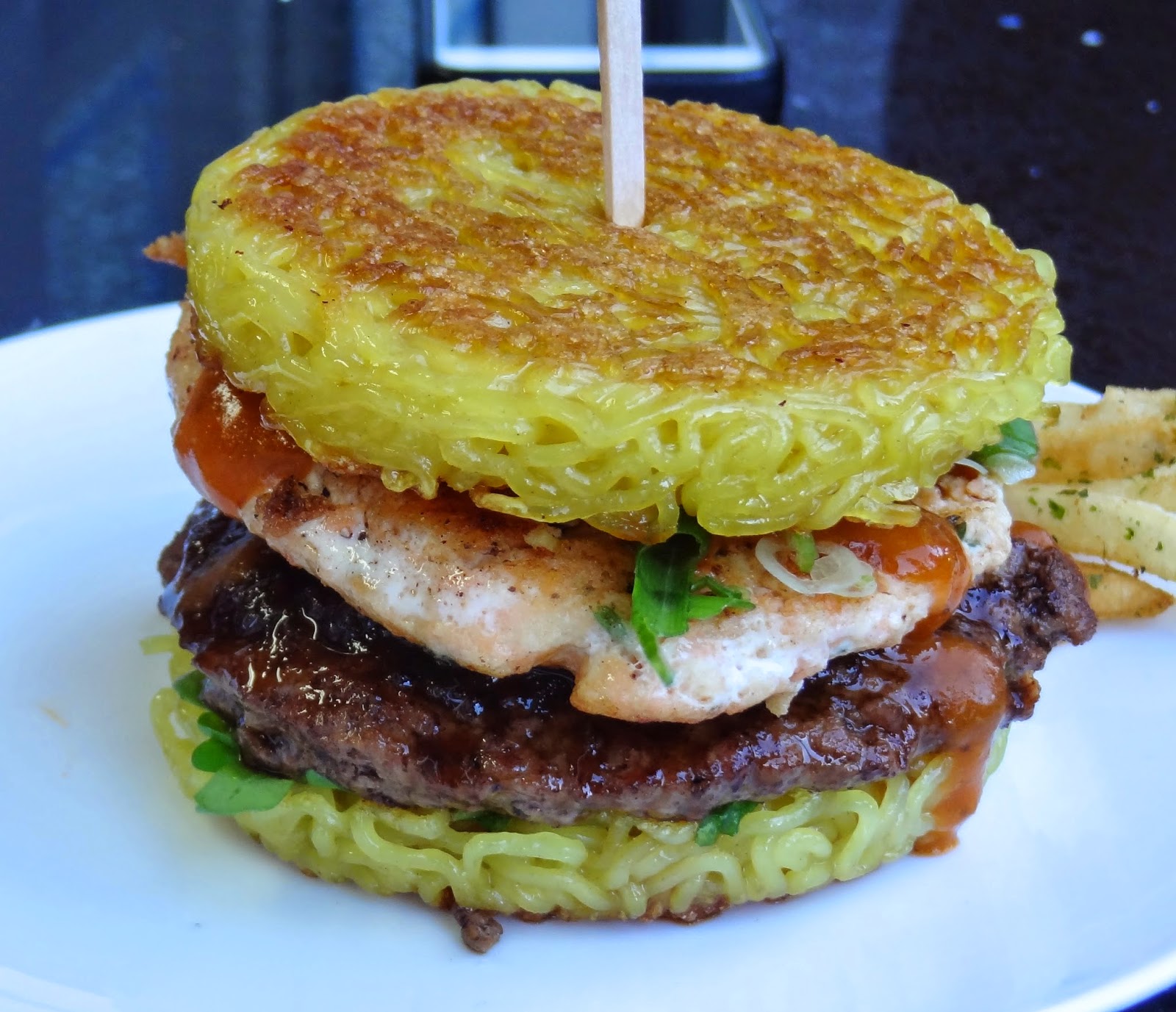 Since a RB Super Fan couldn't decide if he wanted
to try the OG Ramen Burger or the new Salmon one,
a combo was created!

Backyard Bite stated it's a "Surf and Turf"
and history was made... 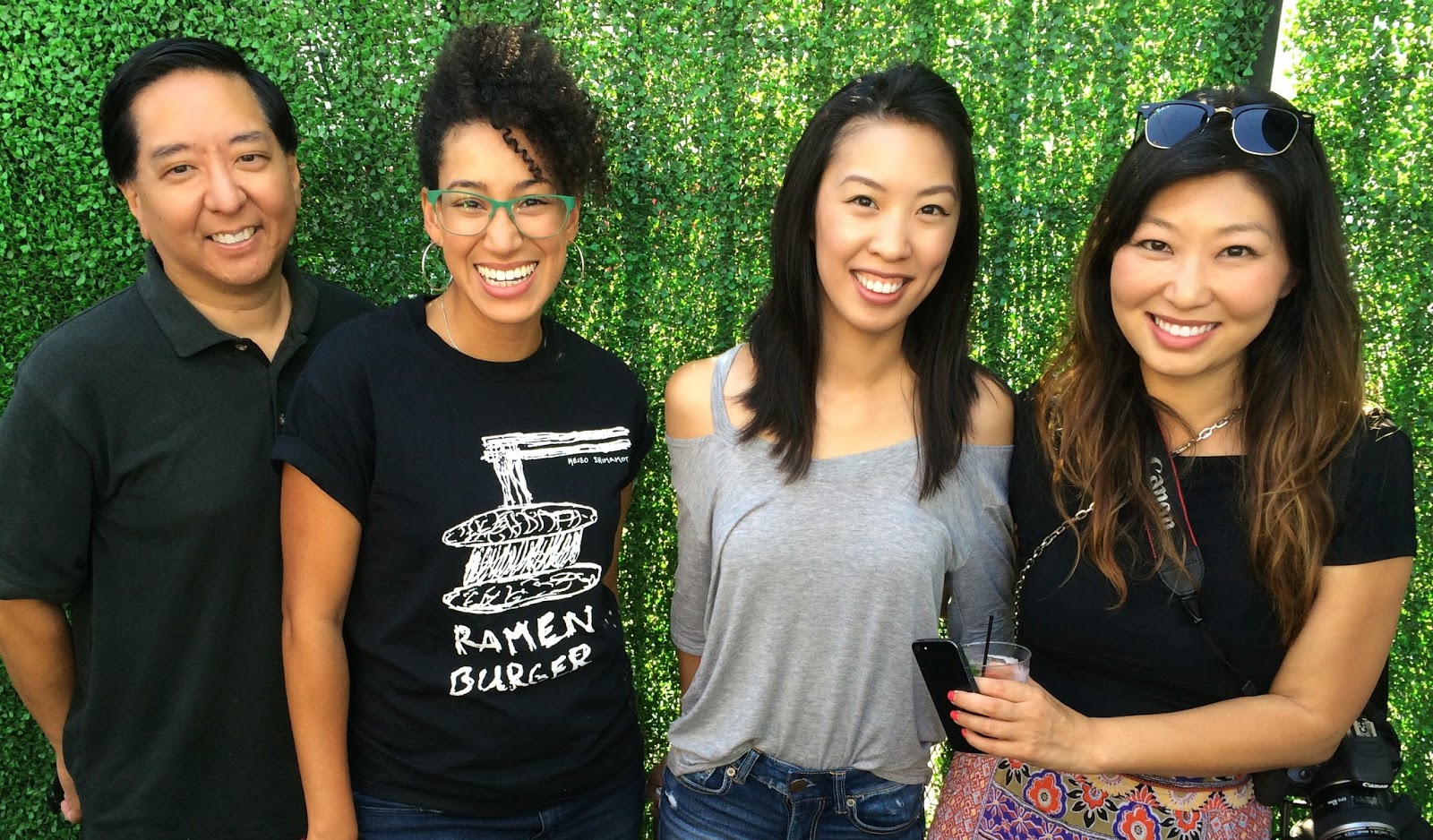 Just when we thought we had a great tour
of the new L.A. Ramen Burger brick and mortar,
got to try the new Salmon RB,
Jeff says he has something NEW for us to try...

It reminds me of the Apple keynote addresses and
Steve Jobs would say there's
"one more thing..." 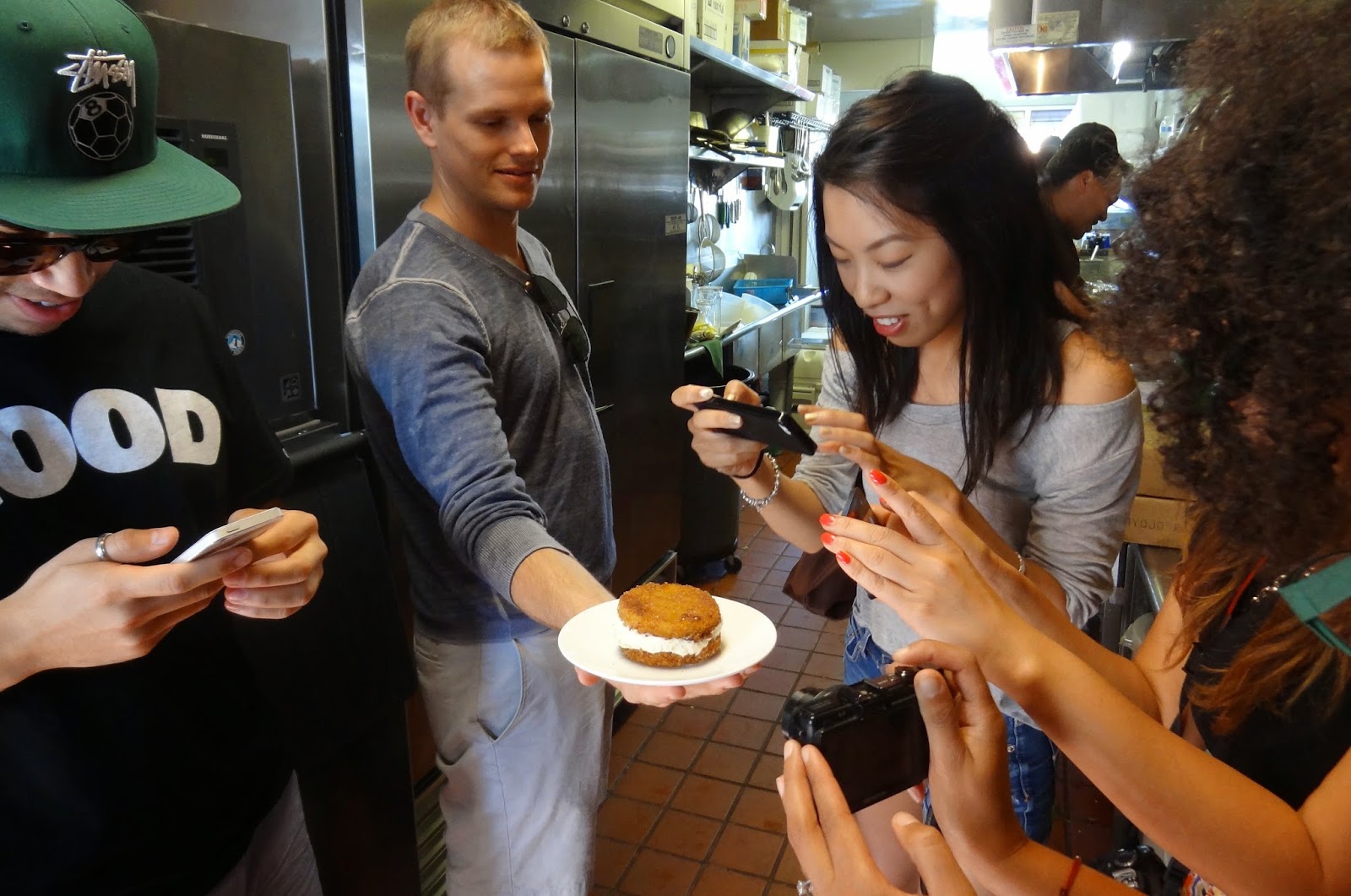 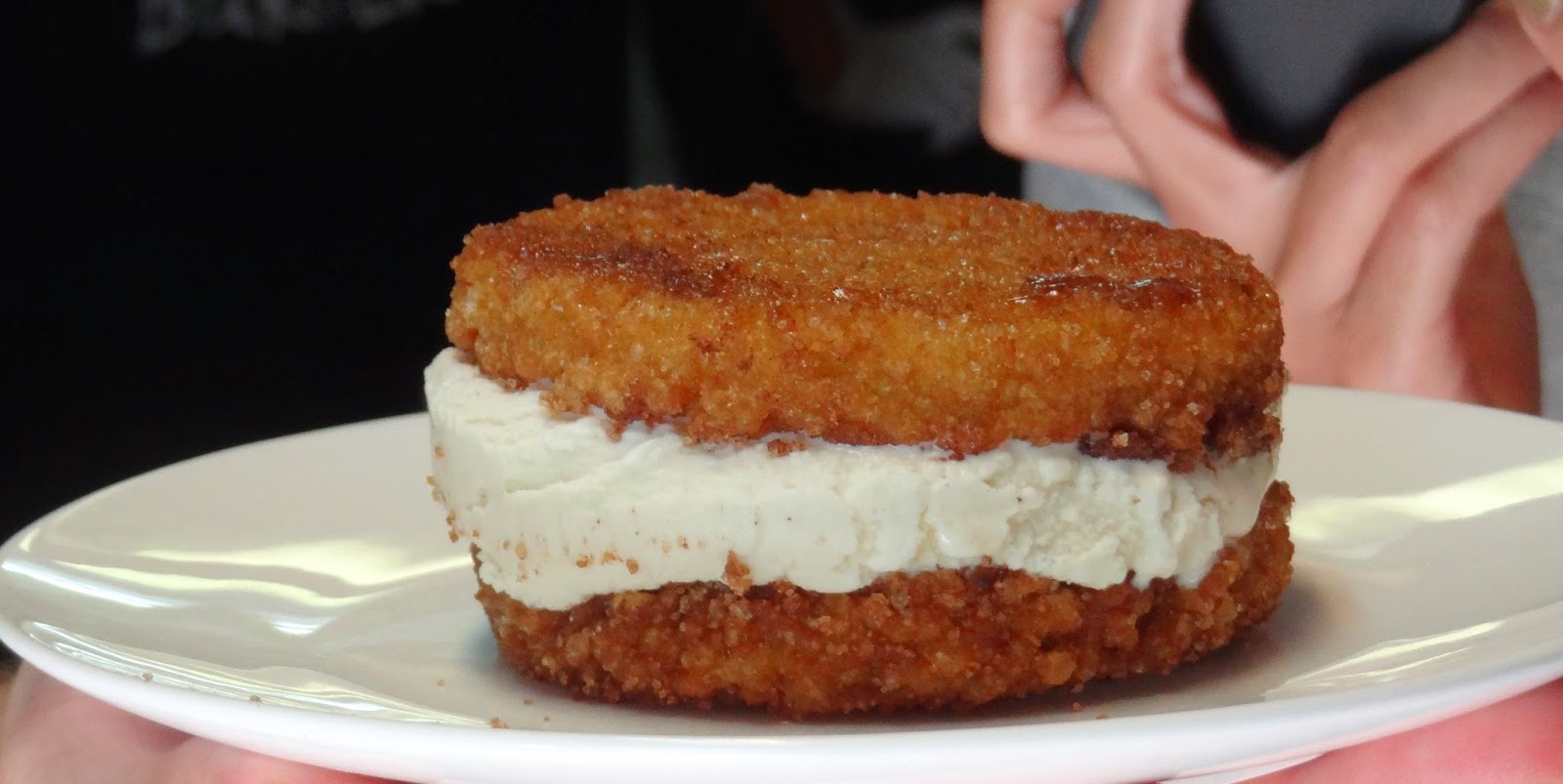 I've tried many many food concept items and most of
the time, I have to either fix them or figure out how to sell it.
Not because Keizo and Jeff are friends of mine,
and I don't say this often,
but this is a HIT!

Cinnamon sugar ramen buns with ice cream
may not sound good, but the flavors went
well together and really good for a first try.

If you read the group's posts and video,
I think we're all in agreement,
this was an unexpected homer!

Since we're at Lock and Key 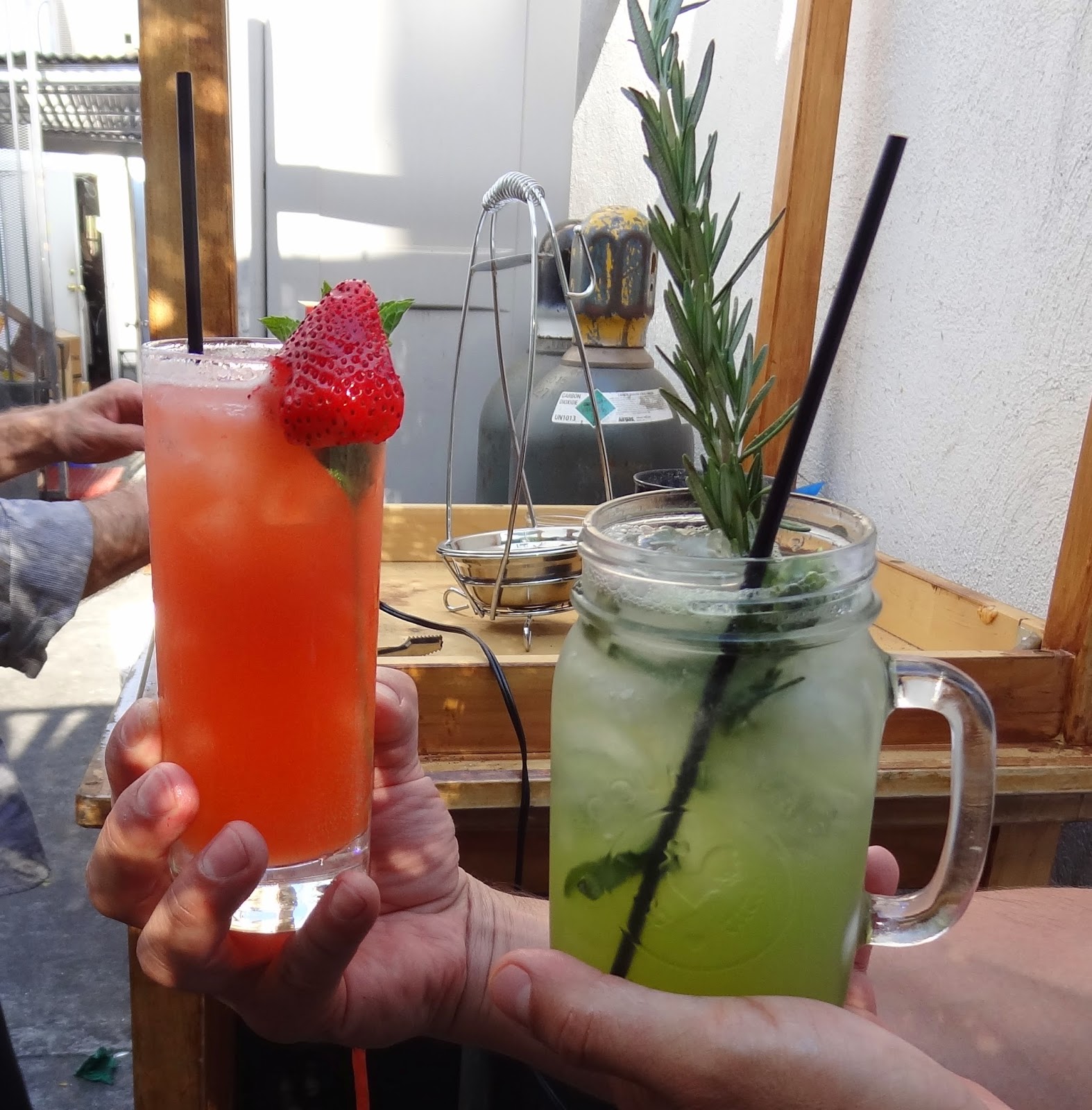 We met owner Cyrus and he gave us a taste of two cocktails,
Strawberry Mule and Razzle Dazzle.

The Ramen Burger brick and mortar location is the kitchen
for Lock and Key. For Tasting Purposes Only

It was a great afternoon and look forward to the soft opening,
beginning August 1st (Thursdays to Saturdays evenings)
and the Grand Opening on September 2, 2014
(Open every evening, except Mondays) 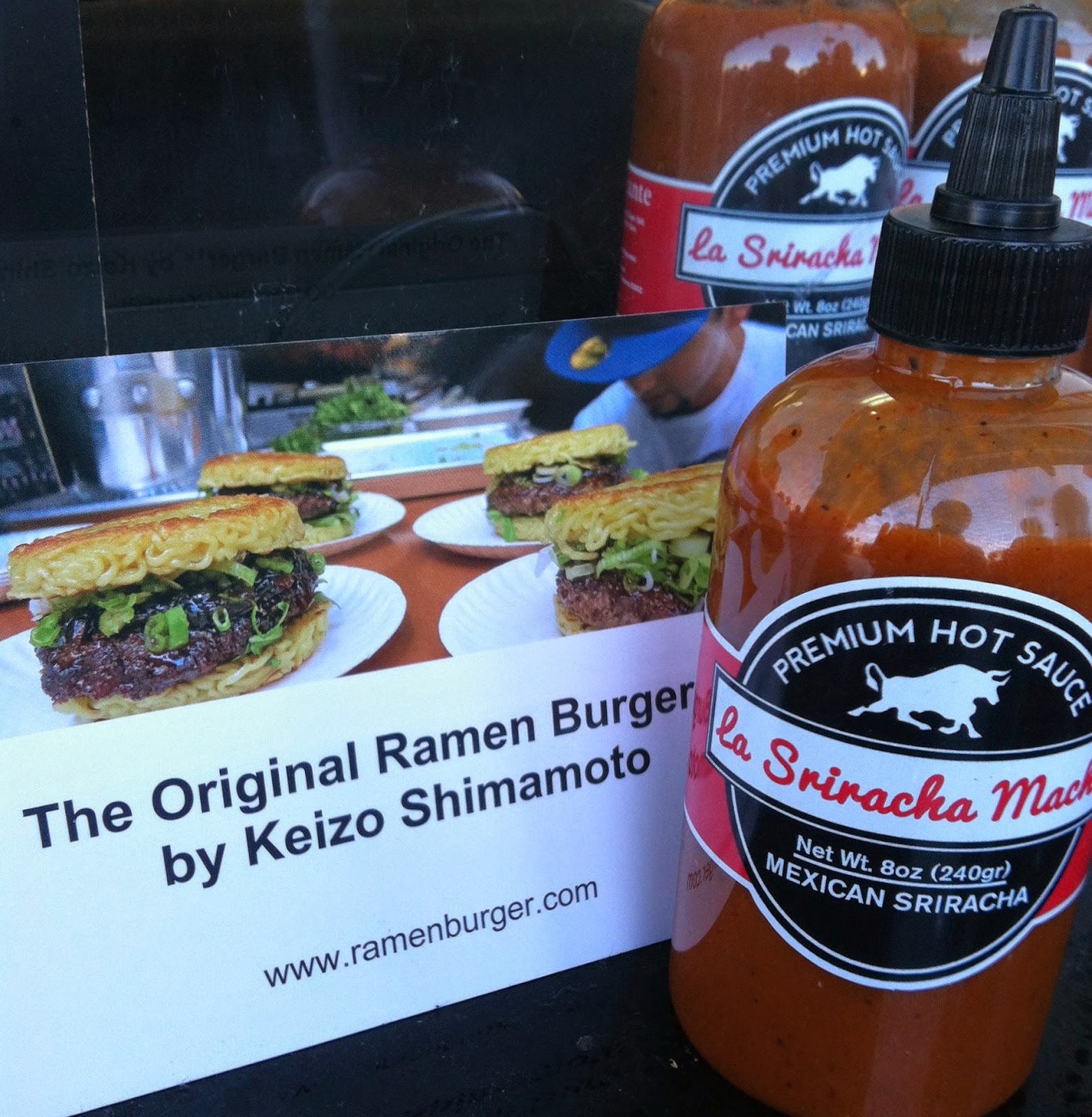 Serves La Sriracha Macha,
a great hot sauce, I had to get another bottle for myself.

There will be future collaborations with
other food notables in the area,
stay tuned...

NOTE:  I was a guest of the Ramen Burger and thank them
for their invitation and hospitality.
All comments and opinions are strictly my own