Showing posts from August, 2012
Show all

Ready for the Hawai'i Food and Wine Festival 2012! 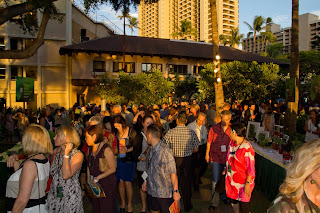 If you haven't been to Hawaii lately, you might not be familiar with the food scene there now. Spending summers on Oahu with my grandparents, I became familiar with what most people know local Hawaii food to be... loco moco, SPAM musubi, saimin and plate lunch served with two scoops rice and one mac salad. Boy have times changed... Grand Tasting Event* Hilton Hawaiian Village Last year, I attended the 1st Annual Hawai'i Food and Wine Festival , hard to believe that was a year ago already... Not only was this a celebration of what the islands have to offer, in terms of the state's bounty of local seafood, produce, beef, pork and poultry, but also to bring in master chefs from all over the world to create dishes highlighting these local ingredients. Chicken Fried Big Island Quail with Fearing's Cornbread Pudding and Texas Barbecue Sauce Dean Fearing Fearing's Dallas Such a beautiful setting and wonderful food Hil
Post a Comment
Read more
More posts