An American Spin on a Japanese Classic 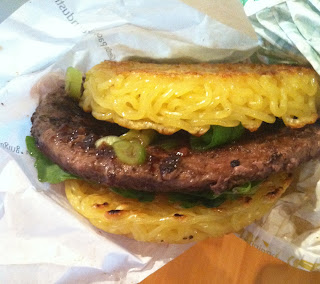 NYC's latest food craze made it's way to
the West Coast for a special pop up
on September 7-8, 2013.

More than a 1,000 people showed up at Mitsuwa
in Torrance on Saturday for one of the coveted
500 Ramen Burgers.
Los Angeles Times post 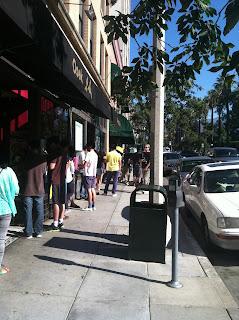 30 People in line at 9:30 am
outside of
Osawa Restaurant 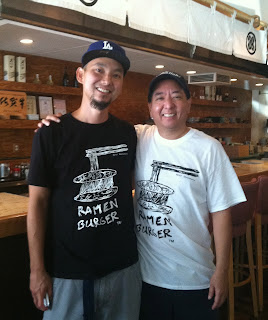 When Keizo told me he was moving to Japan
to study ramen, I knew he would come back
with something HUGE!  It was an honor
to work with him at the Pasadena pop up AND
to finally try the dish he had been working on. 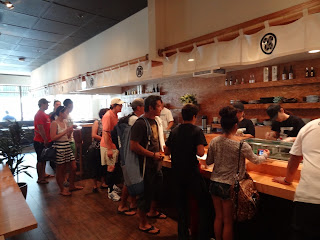 Burgers Up!
(cause I'm not sure how to say it in Japanese...)

Just before 11 am,
the Pasadena Ramen Burger Pop up
is Now Open! 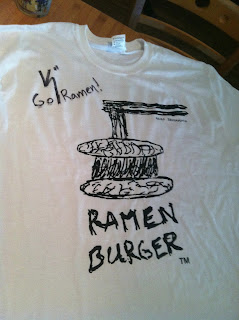 Keizo signed a lot of T-shirts

I didn't get an autograph, but did go home with a
stain on my shirt, I'm a messy eater...
Actually the stain was from clean up. 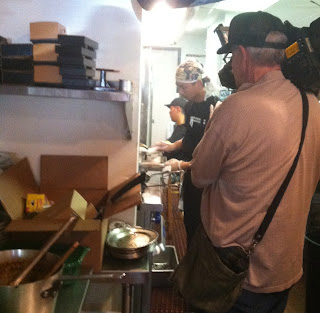 Fox 11 showed up to interview Keizo
and get the info on the Ramen Burger.

I had to stop working cause he was standing at my station,
so I got a break... 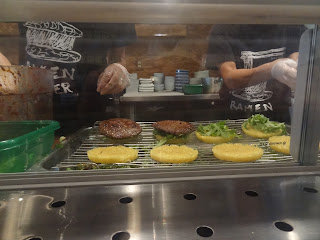 From the customer's POV...

There were 6 people who got back in line
and bought another one.

Yes, Keizo has fans in Pasadena... 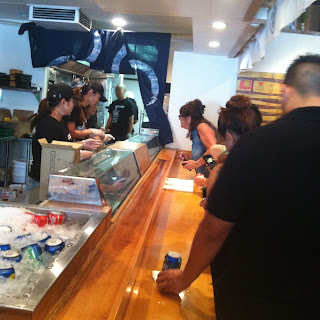 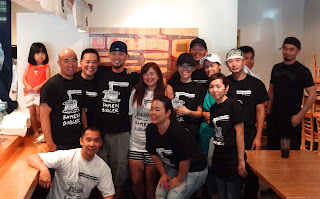 Sunday's Ramen Burger Crew,
except for the burger bouncers
who were outside with the line. 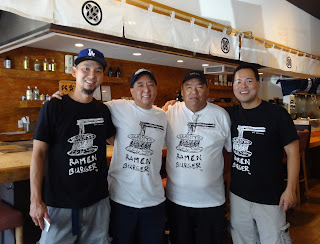 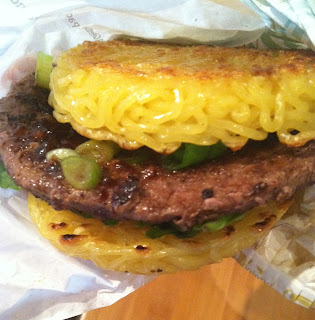 Now it's My Turn!

Besides the ramen bun, there's arugula, green onions
and a beef patty with Keizo's secret sauce.
The ramen bun is soft and falls apart in your mouth.


The flavor profile is like having shoyu ramen
and the arugula gives it a hint of peppery flavor.
What's ramen without green onions, right?

It was really good, not exactly sure what to call it...
It tastes like shoyu ramen, but it's a burger.
It doesn't come in a bowl and there's no soup.
It's just good...

As Anthony Bourdain would say,
"this doesn't suck"

Here's the Secret to the Ramen Burger 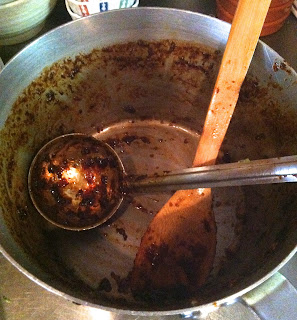 It takes Keizo about 4 hours to make
this special sauce.
Don't ask me what's in it, it's a secret.

Look for the Original Ramen Burger!

NOTE:  Osawa Restaurant in Pasadena does not serve the
Ramen Burger on their menu, it was the location for the pop up.
They do have a wonderful menu of shabu shabu and sushi.
Please visit them online at theosawa.com