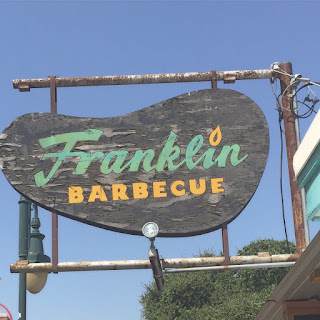 From pork in the Carolinas to ribs in St. Louis,
I'm fortunate to have experienced great bbq.

So, when my current travels takes
me to Austin.  As Daniel Vaughn (@BBQsnob)
states, it's the best of the best. 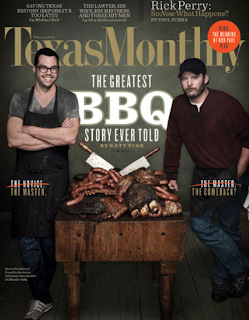 A friend got me this issue awhile back.
After reading it, I knew I needed to visit
two locations in Austin, Franklin BBQ
and John Mueller Meat Company. 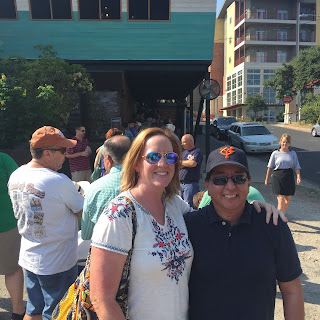 With my longtime friend, and Austin resident, Diane.
She and her husband took the morning off to join me
in line.  We arrived around 9:15 am,
Diane had it all planned out with
folding chairs, mimosas, and breakfast items
from Easy Tiger.

To my critics, YES, I do wait in lines.

One thing that I really liked about this line,
Franklin staffers came around to let everyone
know what was going on.  At about 11 am, they
asked everyone to fold up their chairs, recycle
any bottles or cans, and use trash cans for garbage. 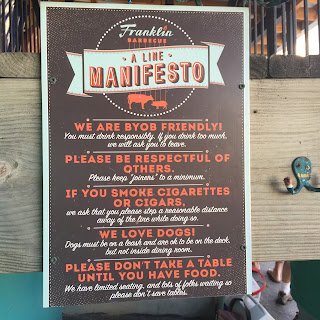 A mantra we should all live by 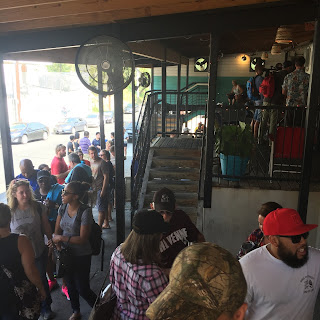 We're almost there...
(an hour and a half at this point)

Above us, we noticed that people
had written their names with dates
dating back to July 2015, realized that
the awning was fairly new.

We've now made it to the door, samples have
been given out to those in line. 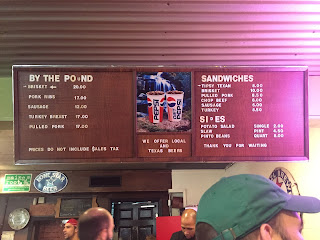 Now inside, the line follows the wall around
to the counter.  We pass the merchandise shelf,
no L in the grey logo T-shirt that I want,
but maybe I'll get a cap...

As we get closer to the counter, now we have
to finalize our order, how much brisket,
sausage and pulled pork to order, THAT is the question?

We get another brisket sample.
Once I tasted it, didn't really matter
how long we've been in line, it was that good.

It's almost 1 pm at this point,
Franklin Barbecue has been open for 2 hours now. 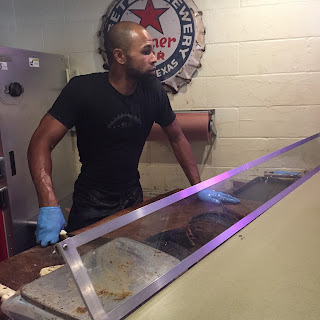 This guy was so fast getting our order together,
but on the other hand, we didn't feel rushed and
he had time to cut samples.
AND he let us know they still had turkey and ribs.

We ordered 1 lb of brisket (both lean and fatty)
3 pork ribs
1/4 lb turkey
3 sausages
and a pint of slaw. 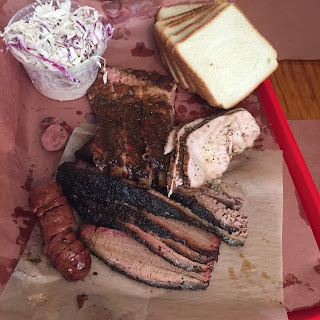 Add in some pickles and onions
and it's time to eat!

I'm glad that we were able to get
the Holy Trinity of Texas Que:  Brisket, ribs, and sausage. 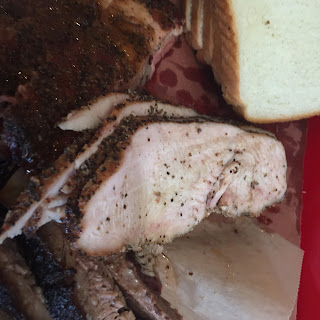 Most incredible smoked turkey
I've ever had.

If Thanksgiving was like this,
I'd eat turkey every day.
It was hard to believe it was bird. 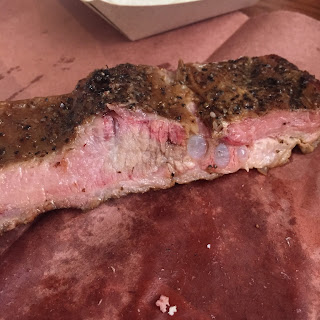 The Pork Rib,
the meat literally fell off the bone,
it was that tender.

Notice the smoke ring,
you see a lot of smoke rings around here.

I'm so glad we were able to try it. 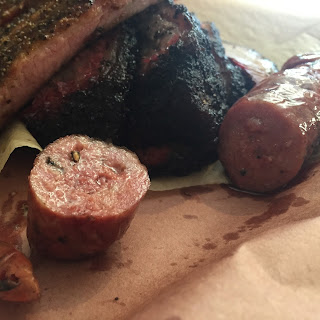 Some beef hearts are included into the sausage,
it also has a snap to it.


And now the reason why I'm here, 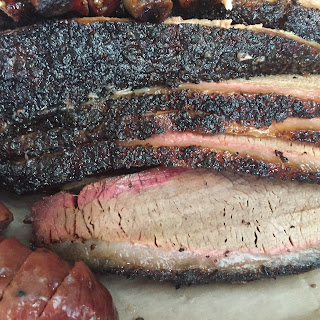 From the picture, a beautiful smoke ring,
the almost perfect bark, it's like it was made in heaven.

What can I say, it was the most amazing
brisket I've had.  I've been trying to think of
anything that even compared, as of now,
can't think of anything that comes close.
I do agree with others who have said this
is the best BBQ around.

This was one of the best meals I've had in a long time!
Considering no silverware on the table,
the plate is a piece of paper, a roll of paper towels on
the table, and you bus your own tray.
YUP, this was one good meal
AND this isn't a Michelin starred restaurant.
But, I did see some Michelin tires in the parking lot. 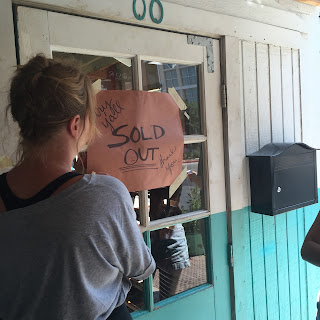 Just as we were leaving,
the official "Sold Out" sign went up
just a few minutes after 1:30 pm.

I overheard her tell someone, who showed up too late,
that people will start lining up between 6 - 7 am tomorrow.

11 am - Sold Out
Closed on Mondays


BTW, I did stop by John Mueller Meat Company.
Unfortunately, I didn't have time before my meeting
to eat.  I will have to make a stop the next time
I'm in Austin.  I did hear on the radio that day,
one of his pits was stolen.  He was on his way to
Houston for a benefit and stated he'll have
to get another one upon his return to Austin.