There were two food events that I was trying to decide if I wanted to go or not (both on the same day).  One was the LA Street Food Festival at the Rose Bowl in Pasadena and the other was Tacolandia at El Pueblo de Los Angeles (Olvera Street).  Last weekend was the DTLA Night Market, a few vendors told me they would be at the LA Street Food Fest and to stop by.  I was still debating if I was going or not, until Jeffrey Shimamoto called and invited me to the Sold-Out LA Weekly Tacolandia. 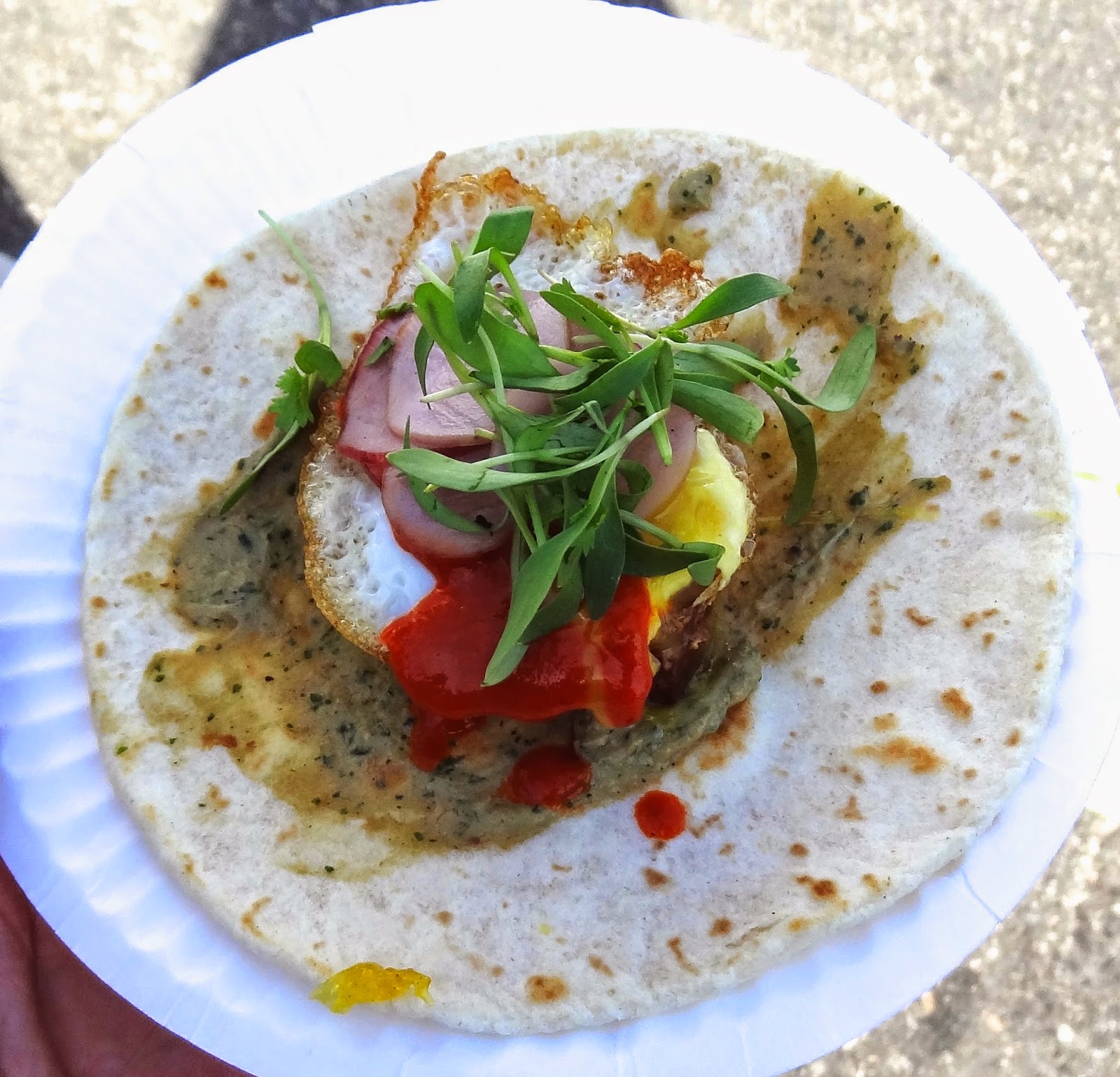 Well that was an easy decision...TACOS!!! 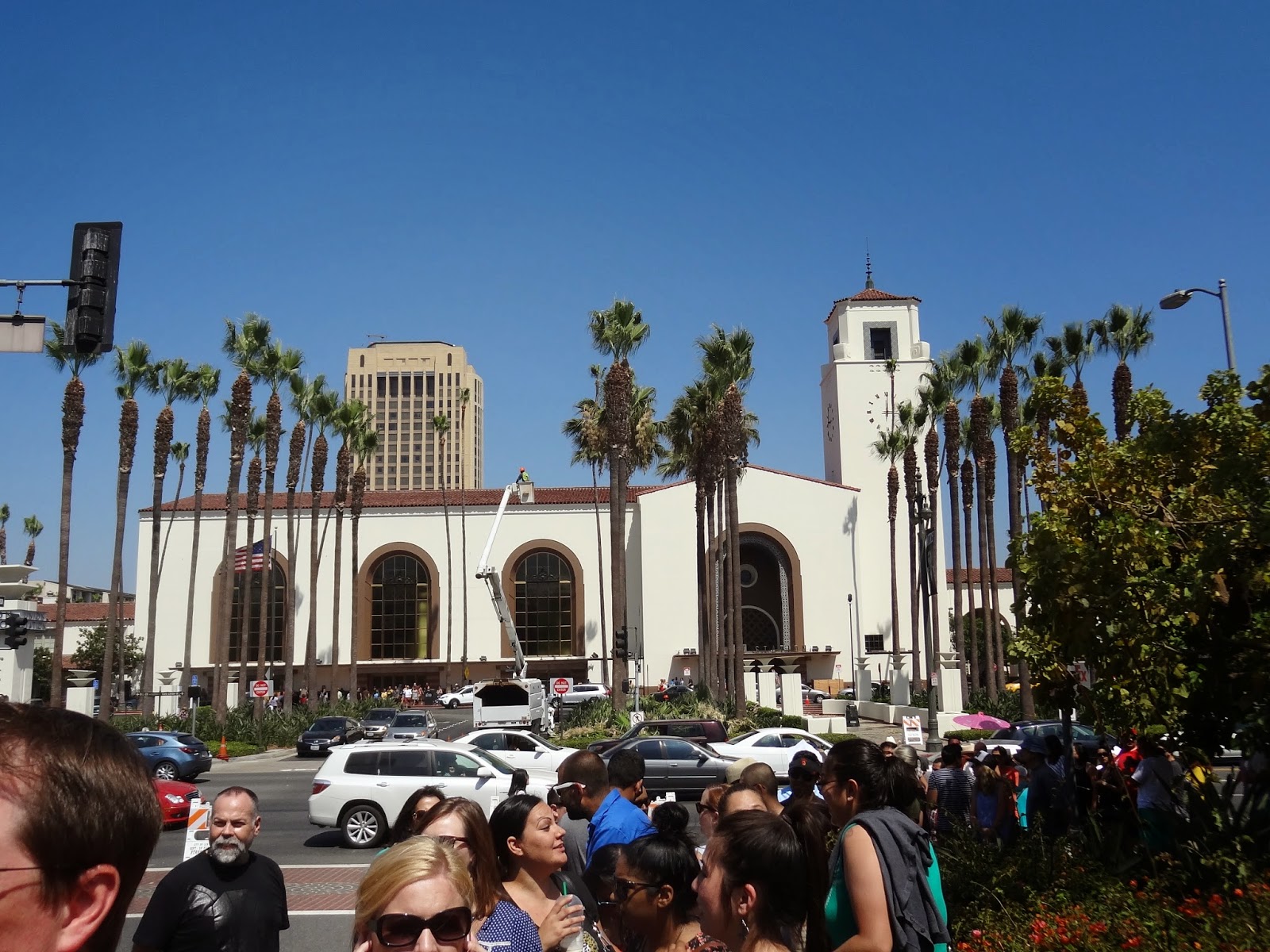 Although the Premium Ticket line ($45 - $50) was just as long.
In addition to access to the event and taco samples,
a premium ticket included a VIP gift bag and 5 drink tickets. 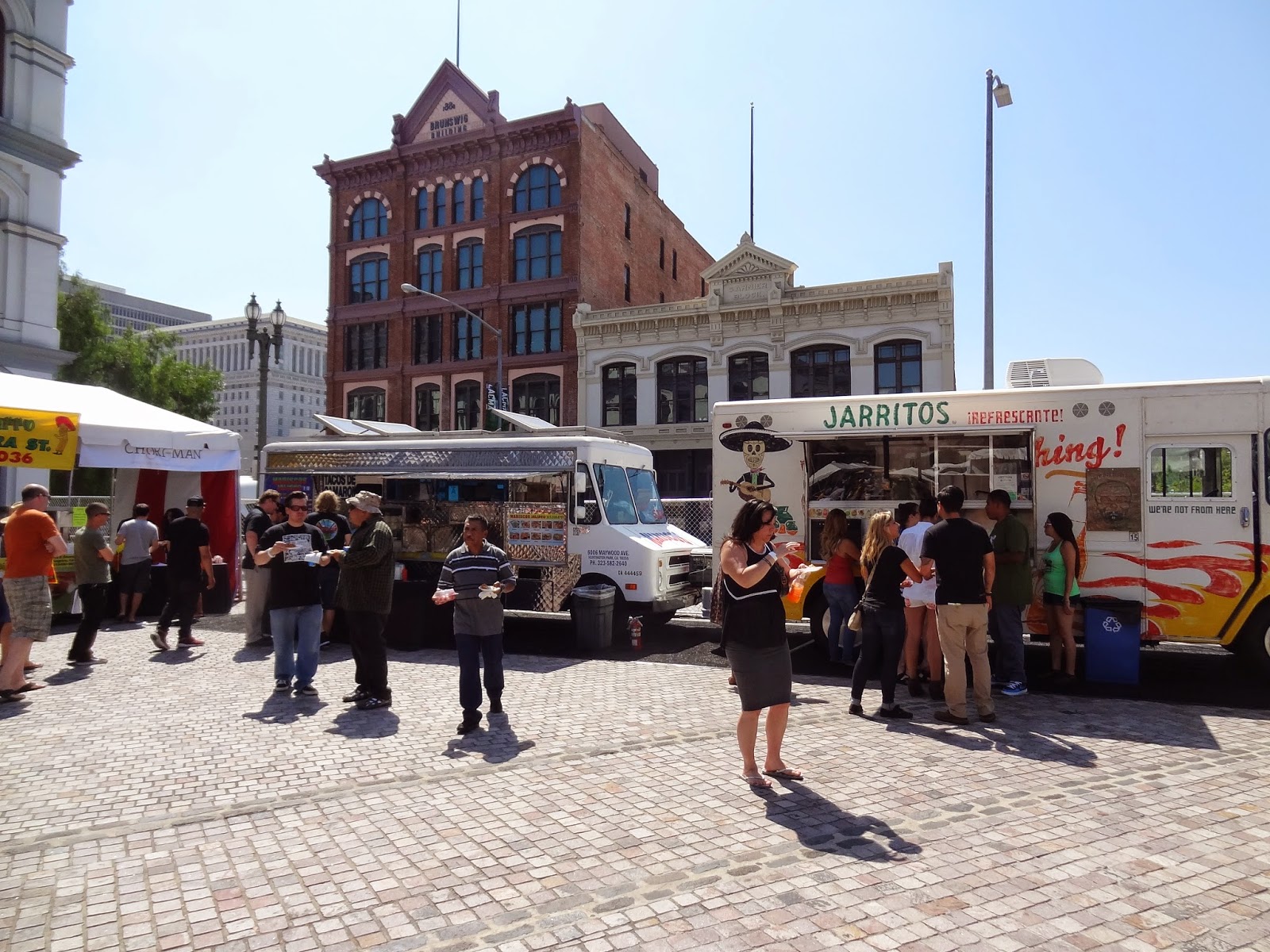 When the gates opened,
we headed to the Westside of the plaza
to begin our taco adventure. 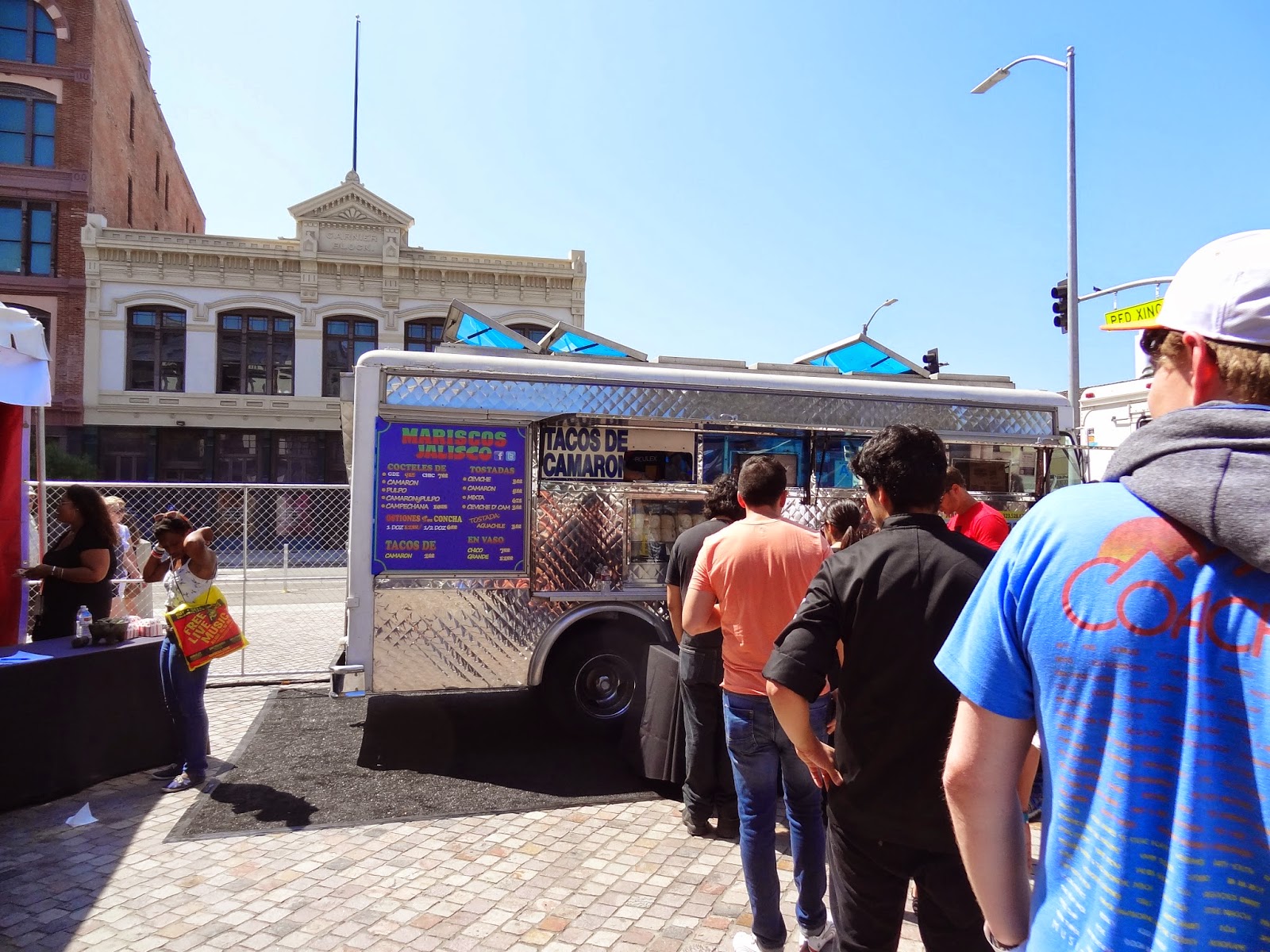 OK, so we followed the guys behind us in line,
they seemed to have a plan and knew
which vendors to hit first. 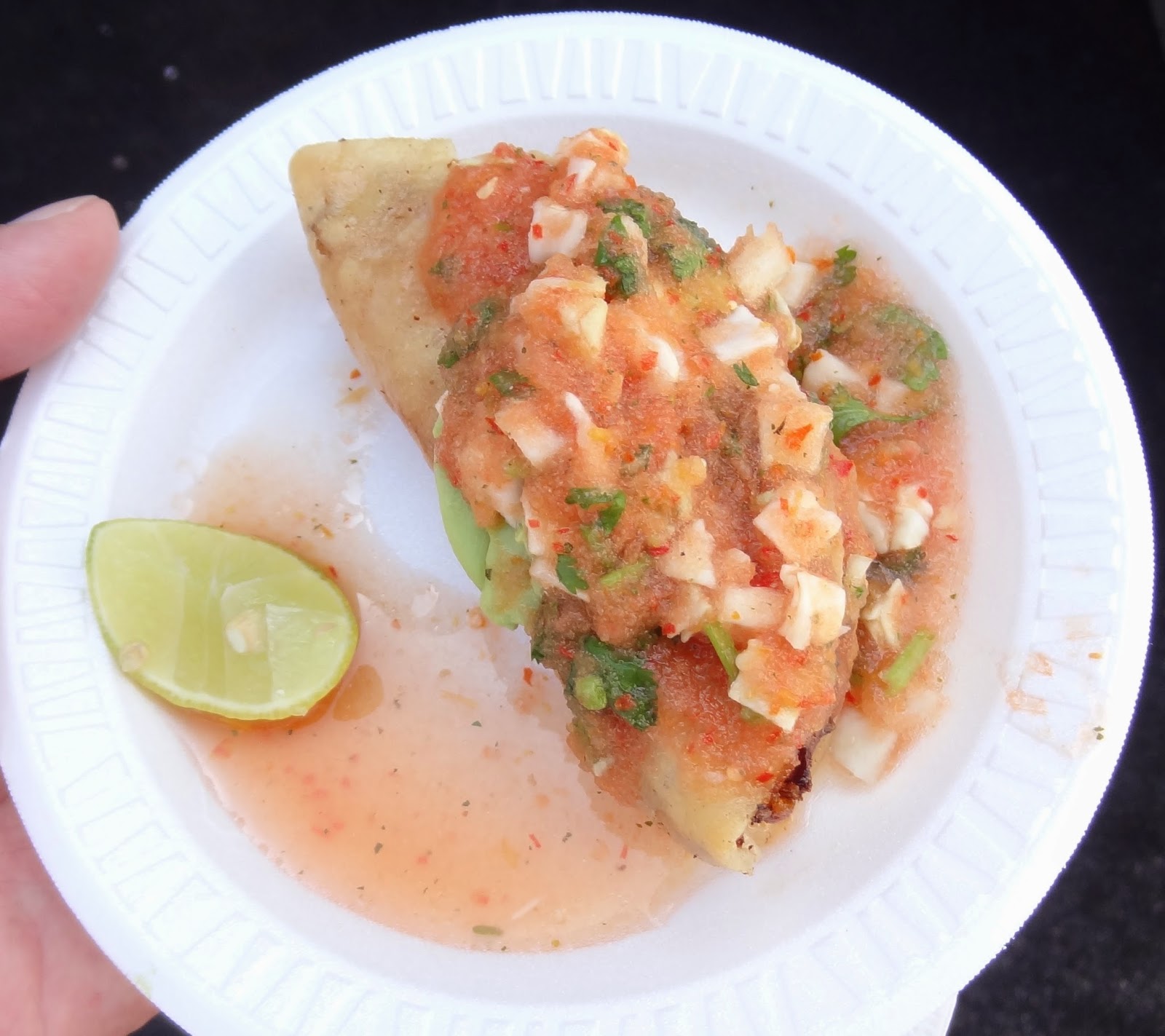 First Taco of the Day!
From the Mariscos Jalisco truck

We were off to a great start... 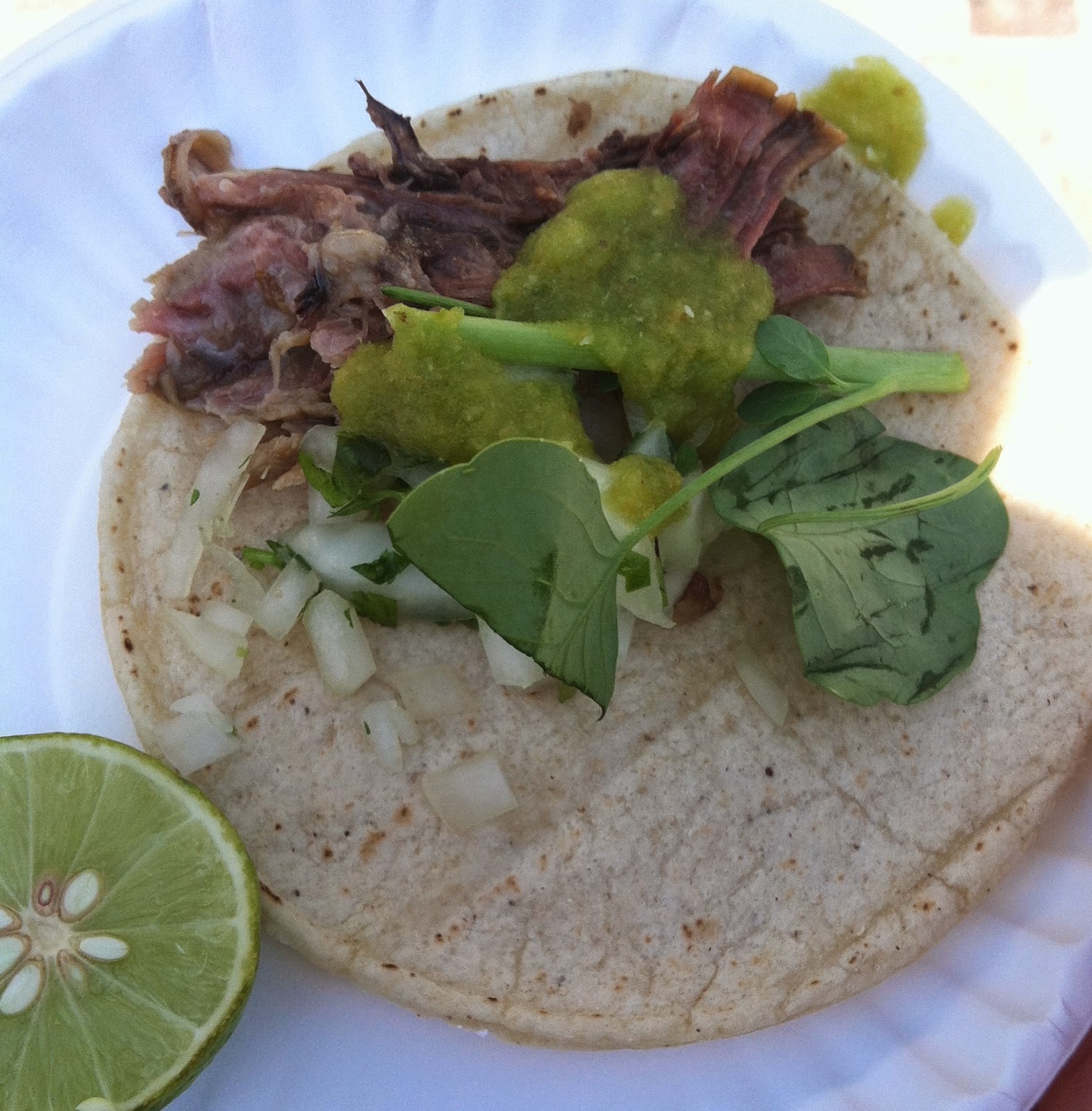 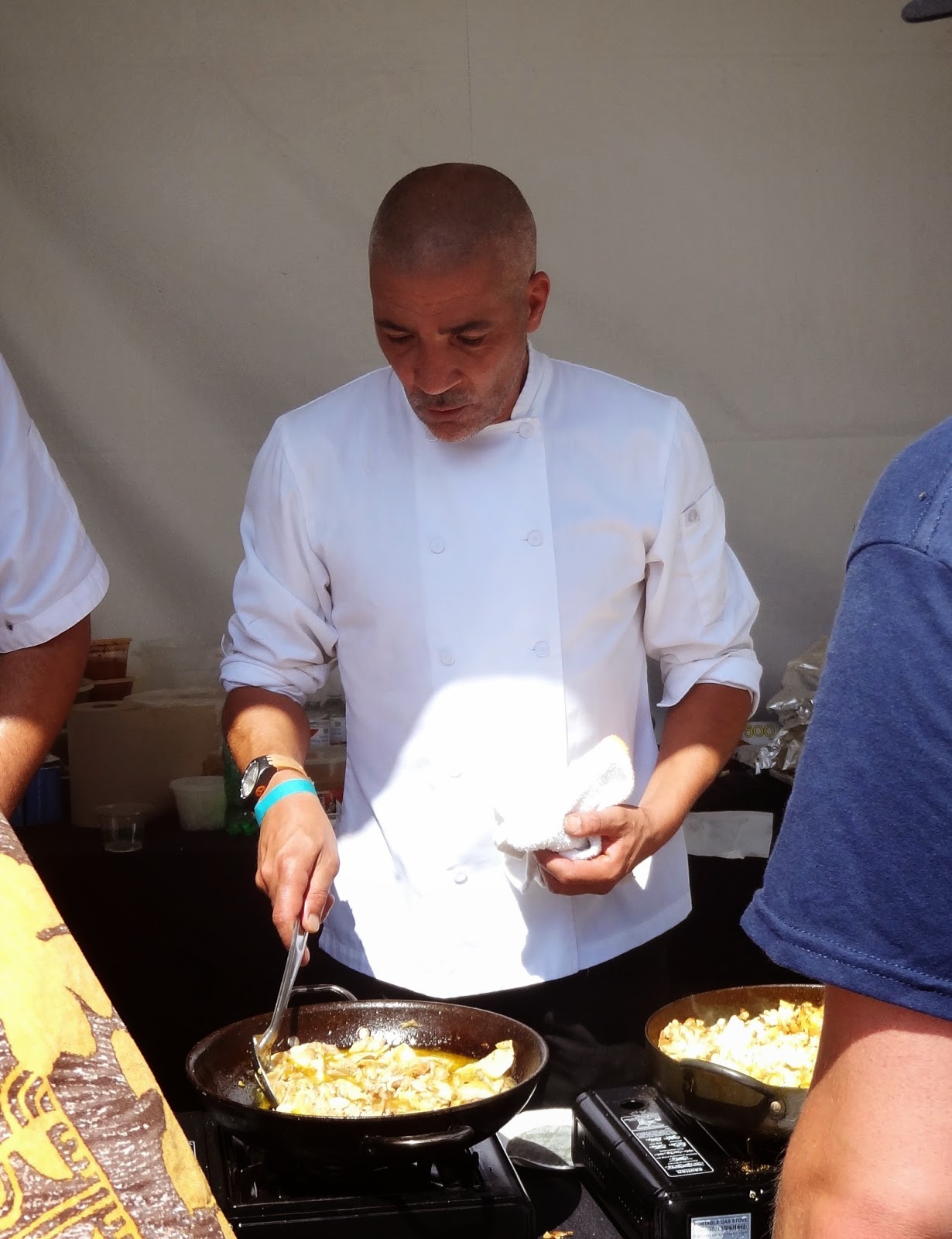 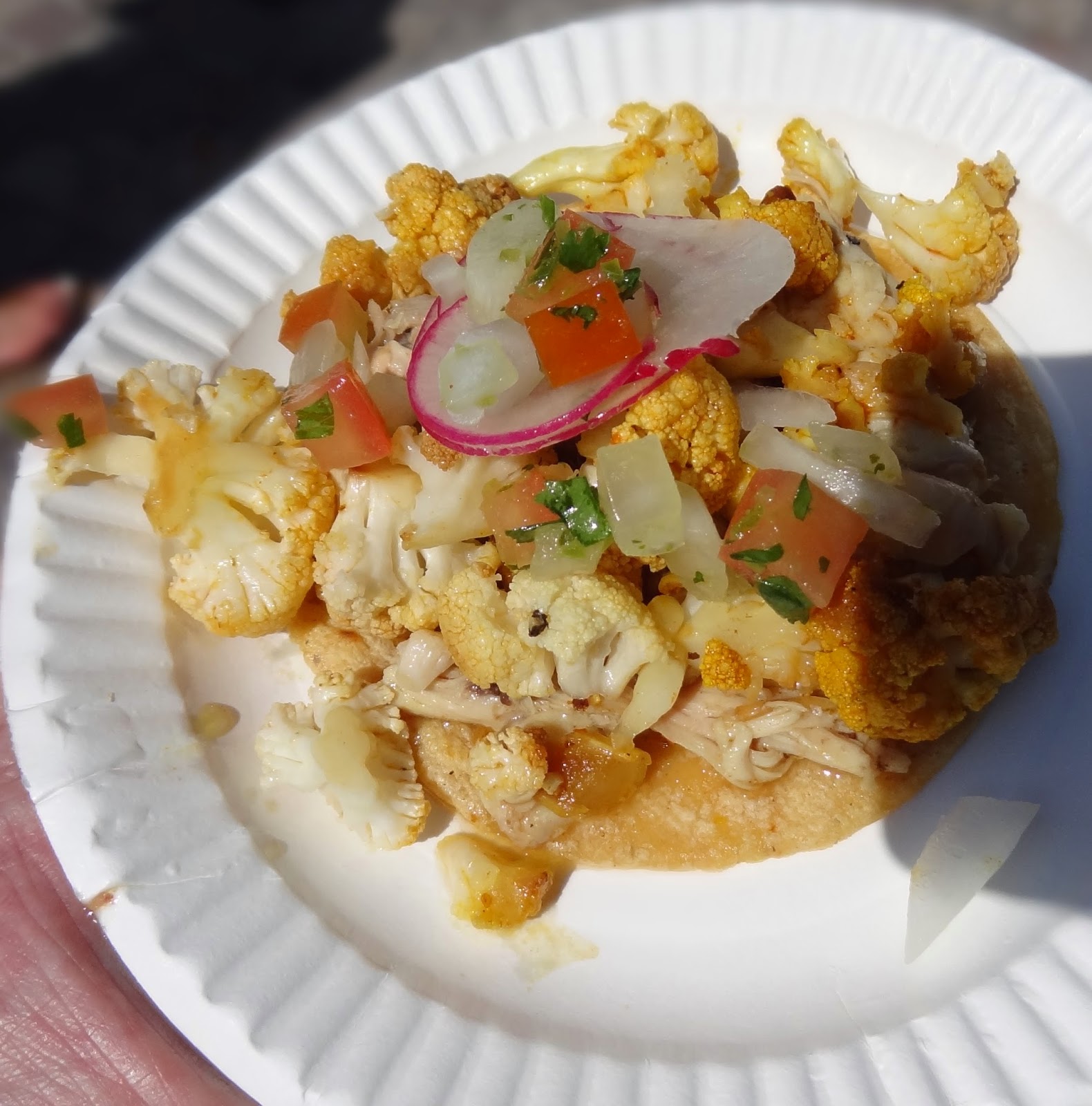 I asked for the chicken tajine, but the chef
insisted I have the cauliflower too, no arguments here.
Flavors were really good! 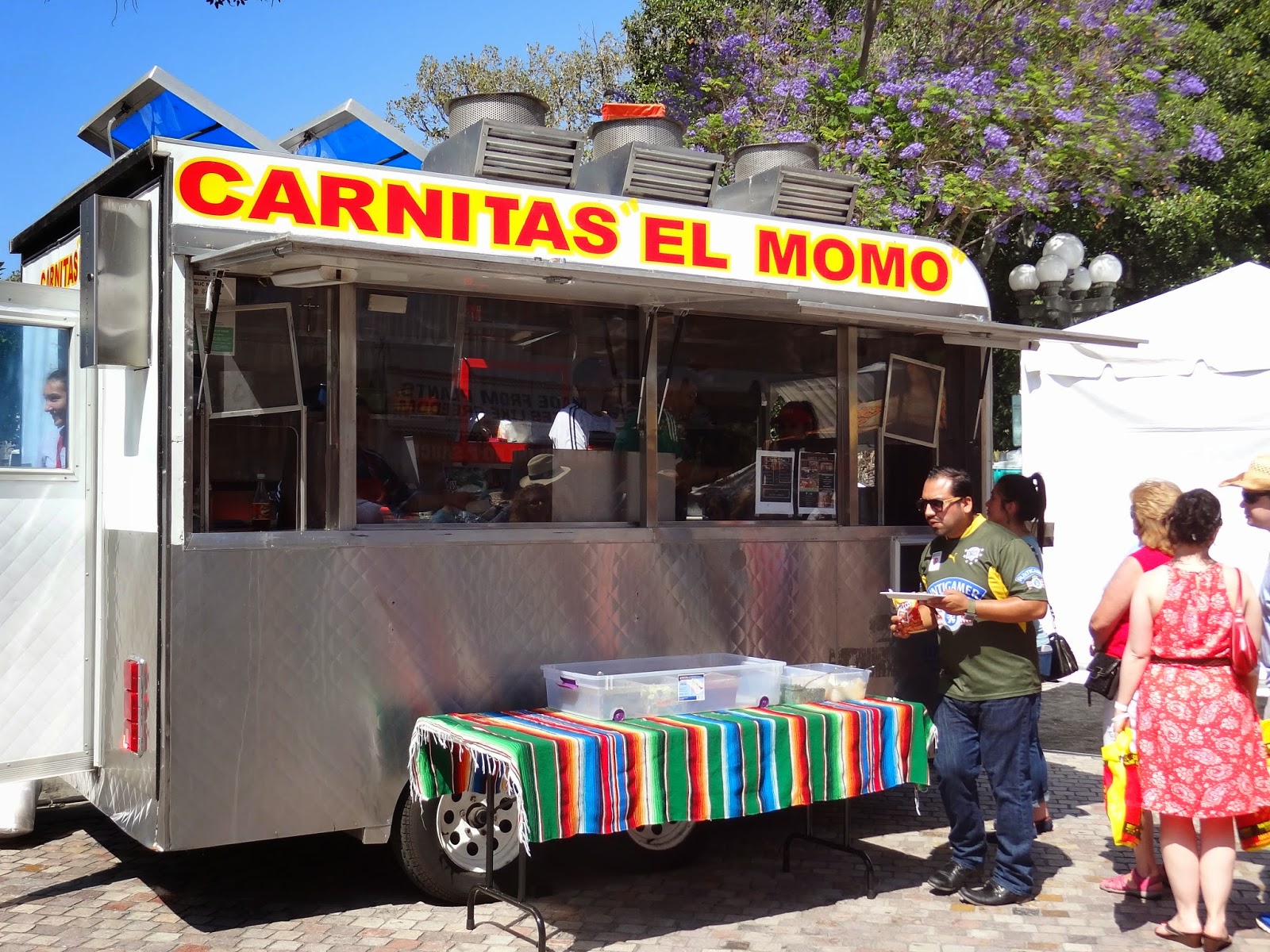 Did someone say Pork??? 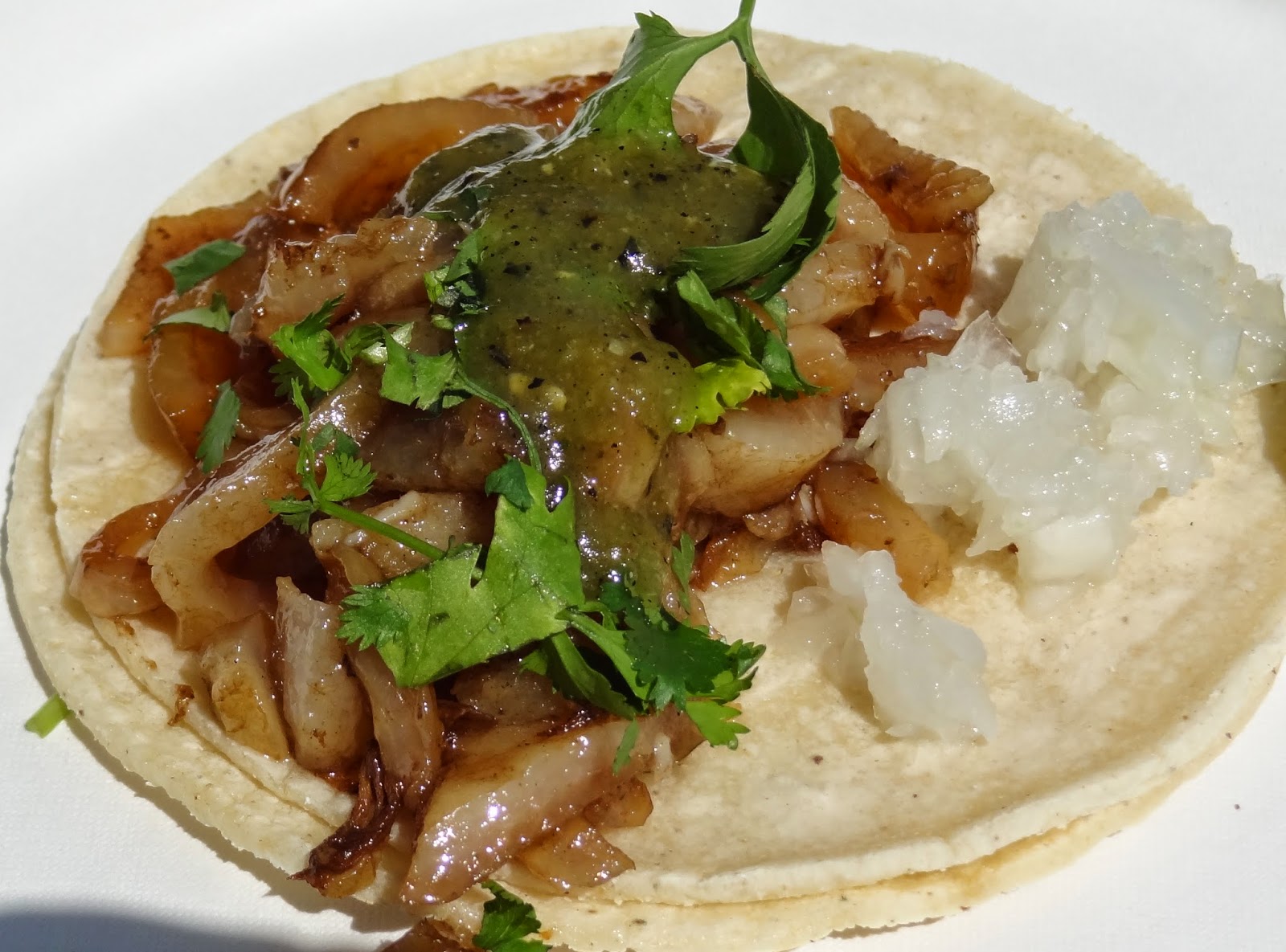 Their other menu item was a pork stomach taco.
I didn't want both, since we had
so many more tacos ahead of us.

The skin was braised and very tender,
some people may not like the soft texture. 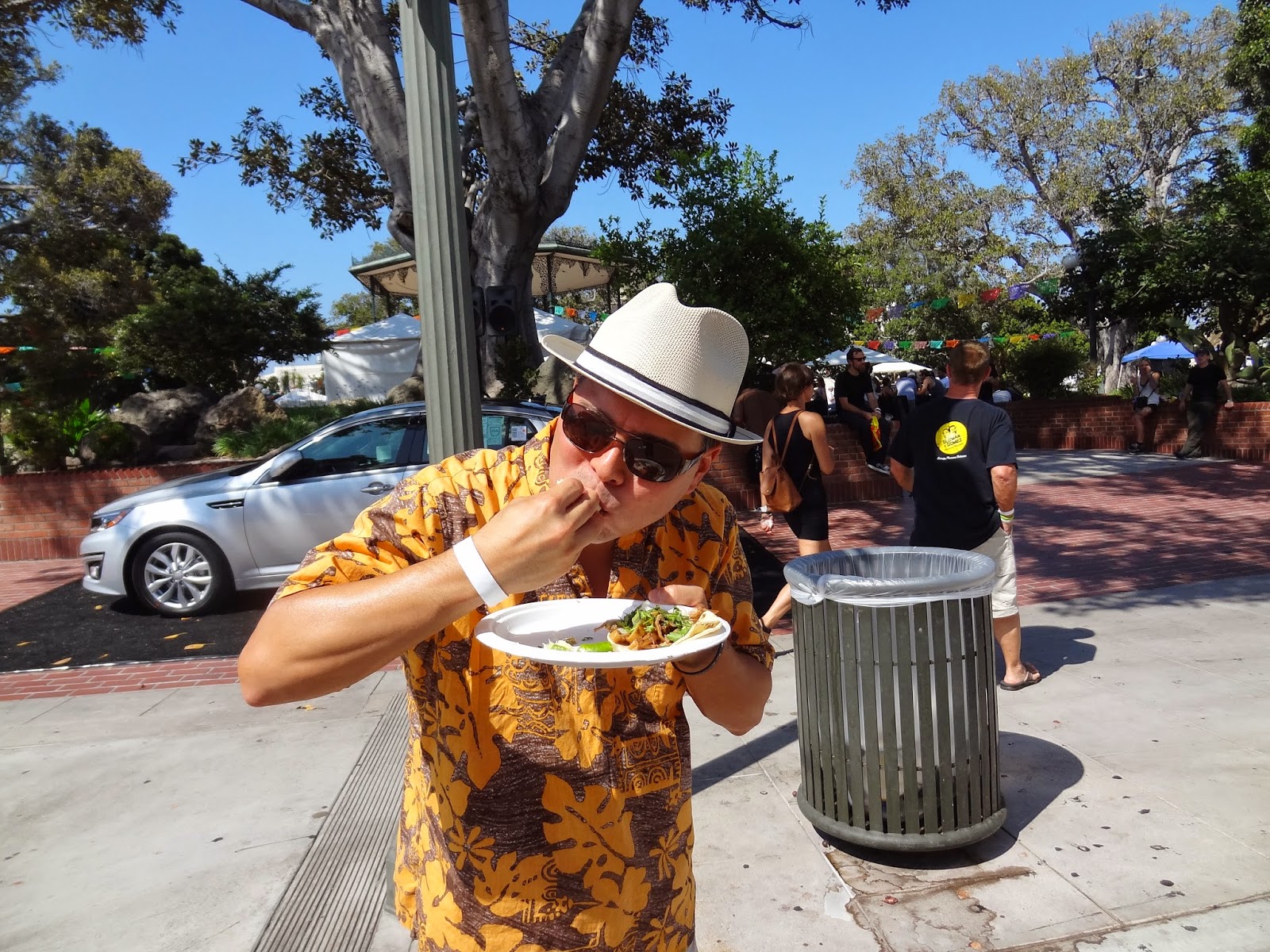 I mean, he shared a piece of his pork stomach taco... 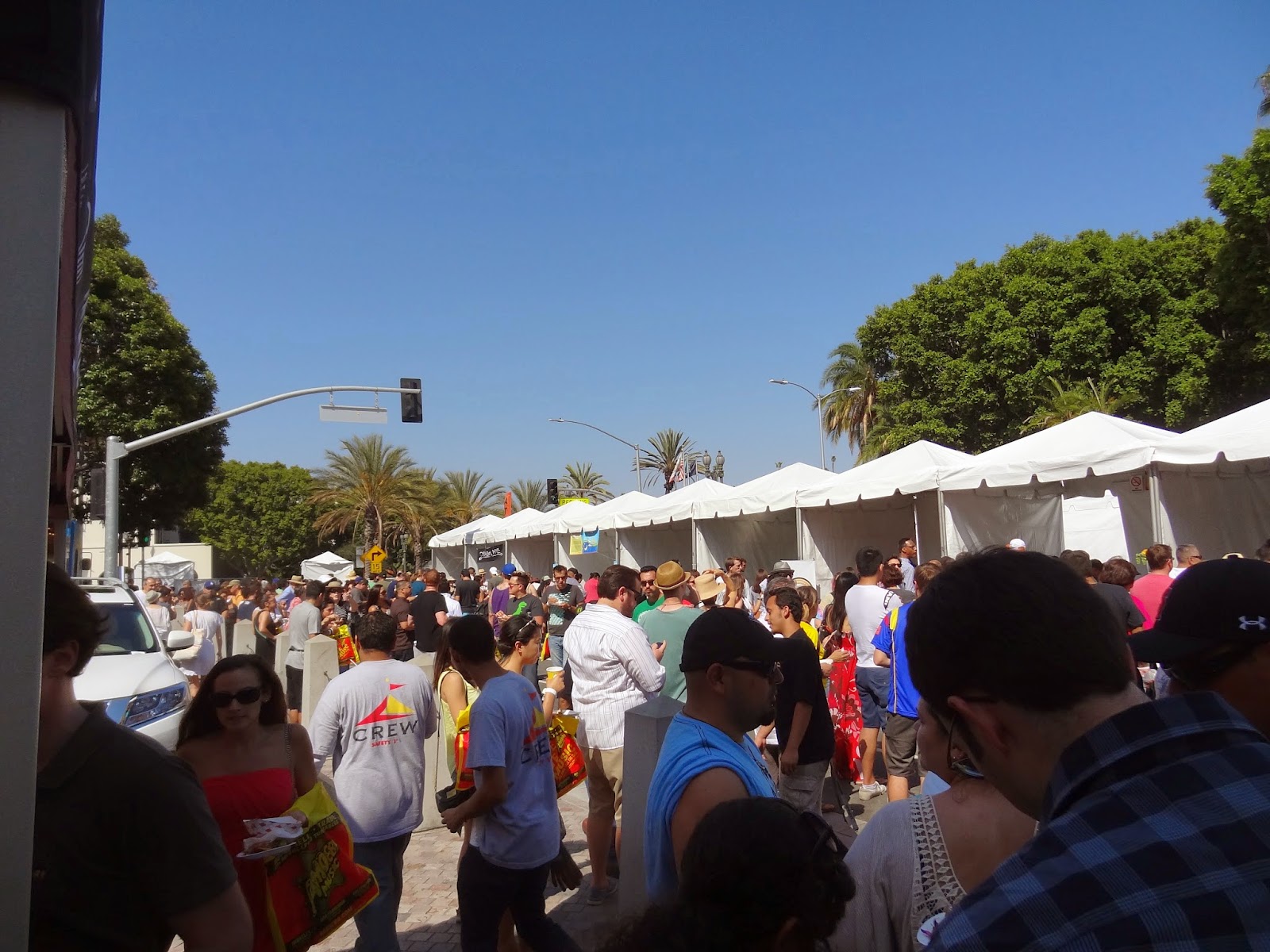 It's getting a bit crowded now. 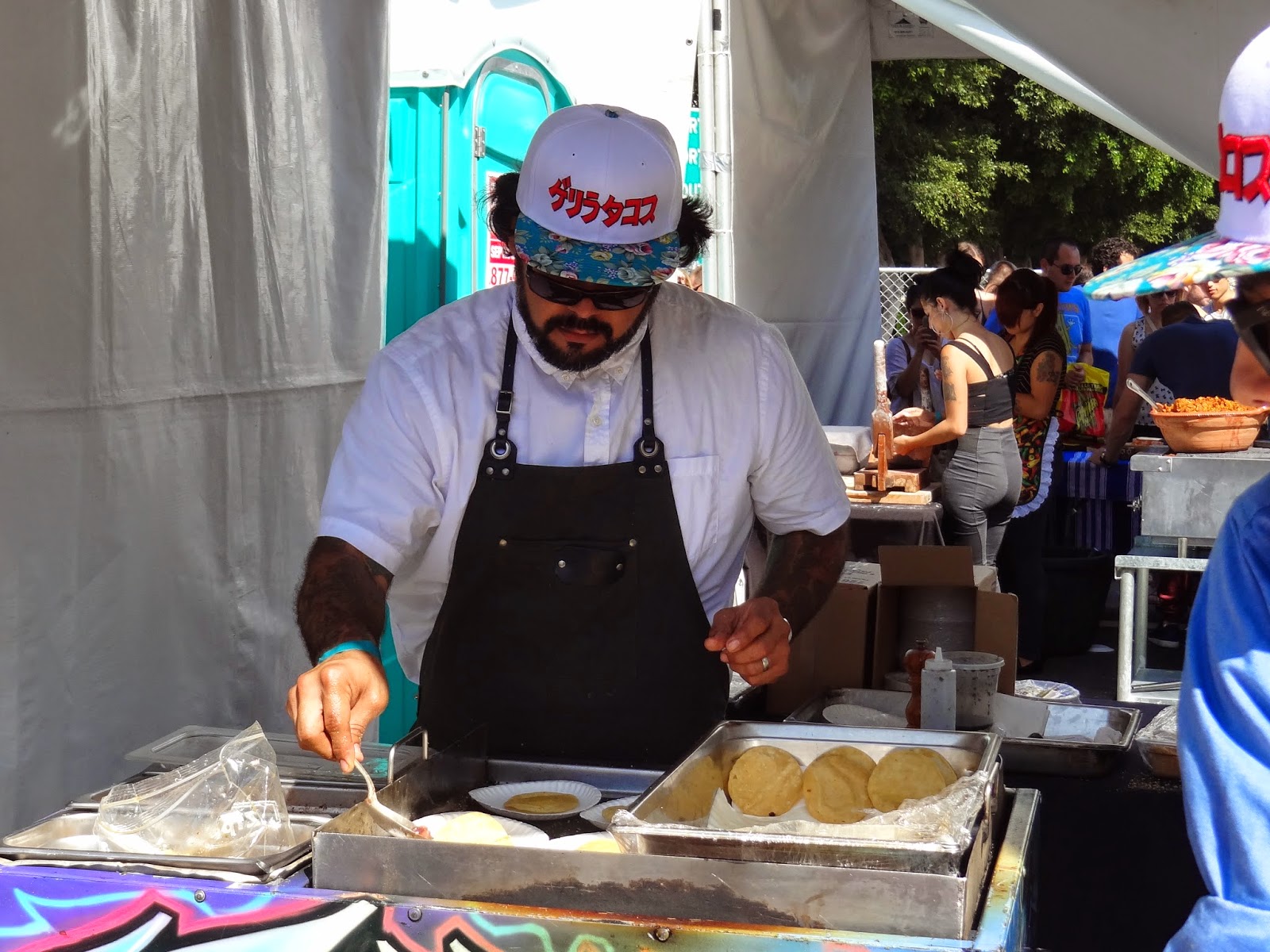 I've been to their truck, a very creative menu
(in a good way) and today was just as good. 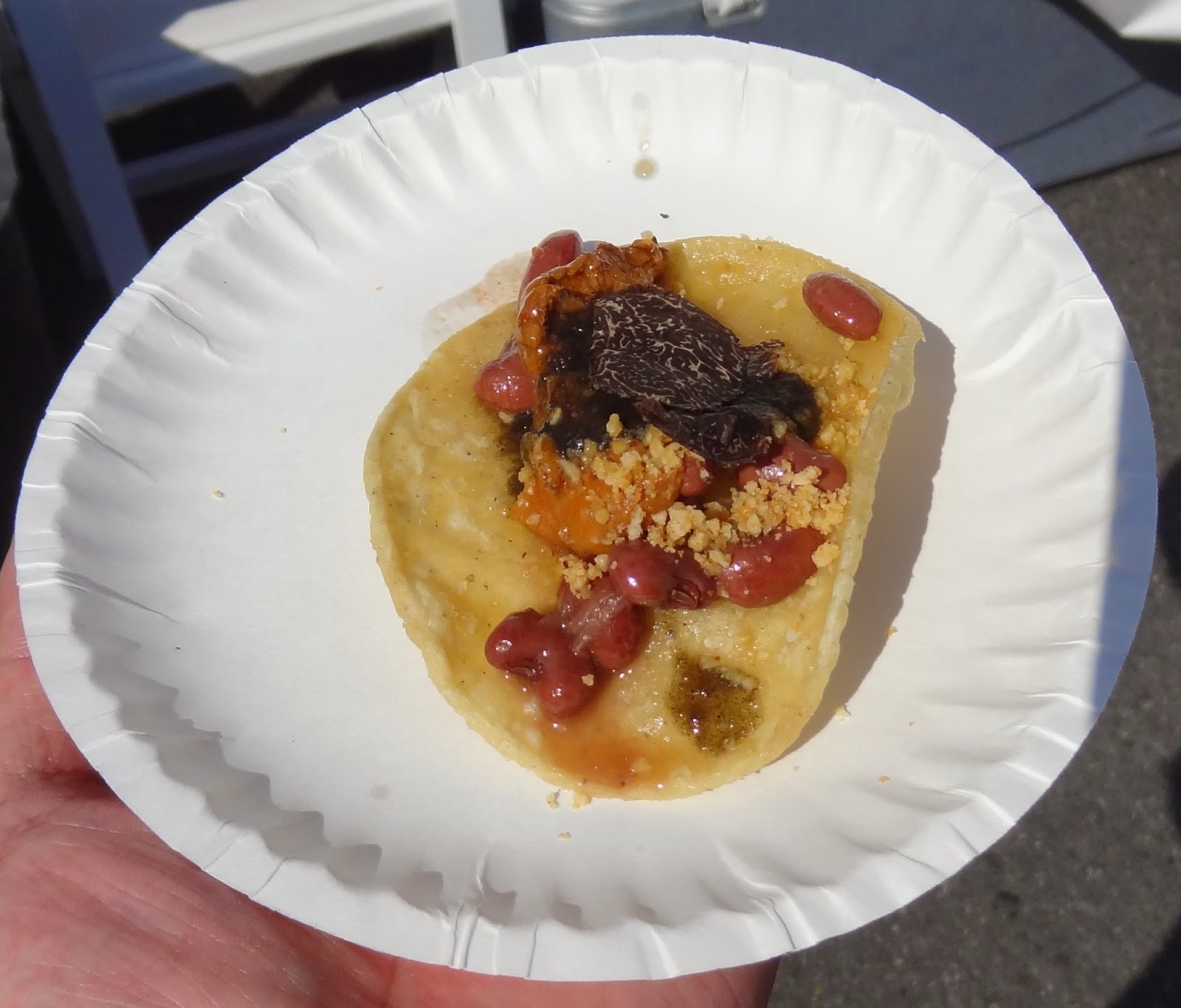 I don't exactly remember what was in their taco,
but I enjoyed it, look at that shaved truffle. 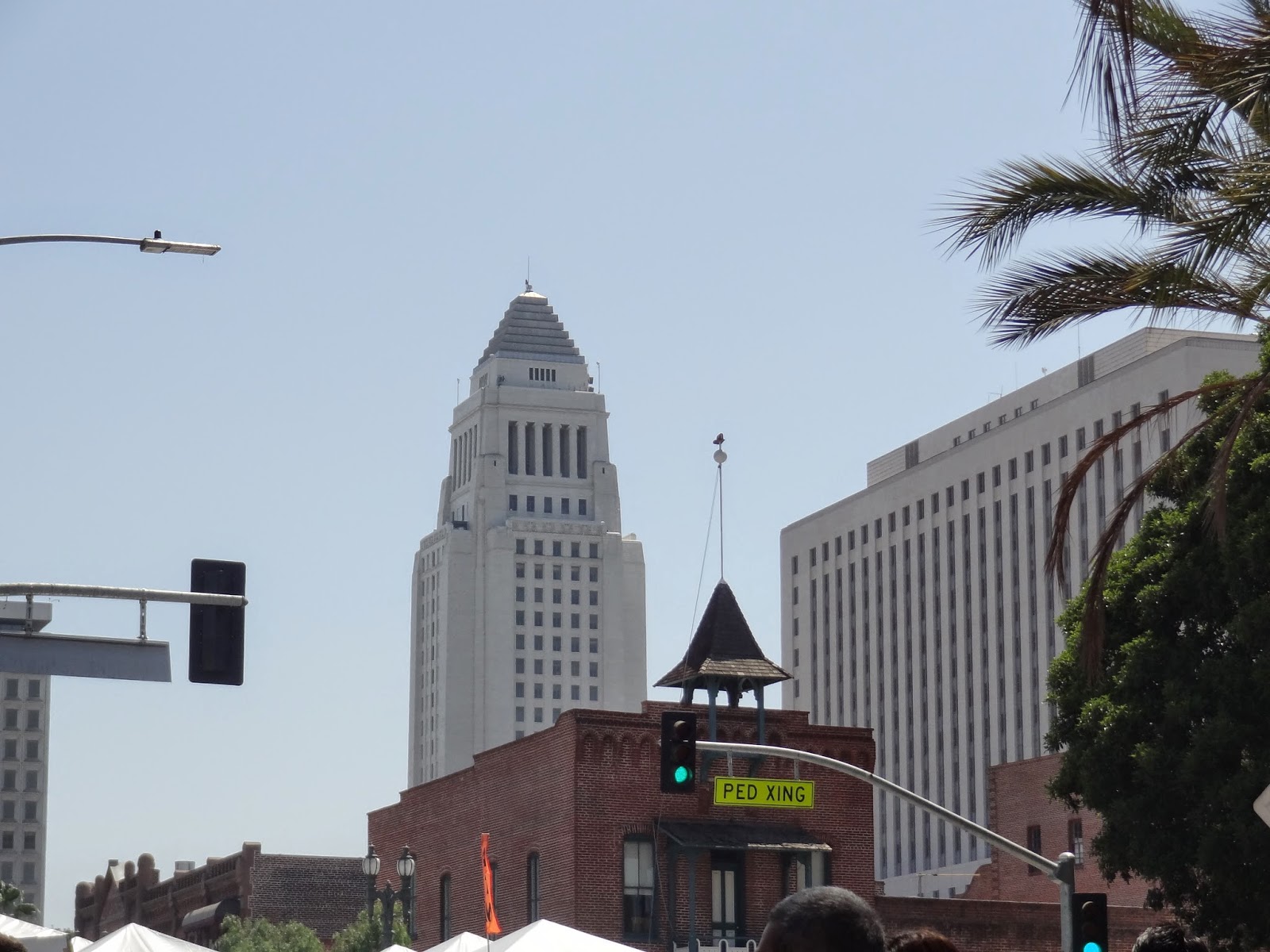 It was a beautiful day in Downtown Los Angeles 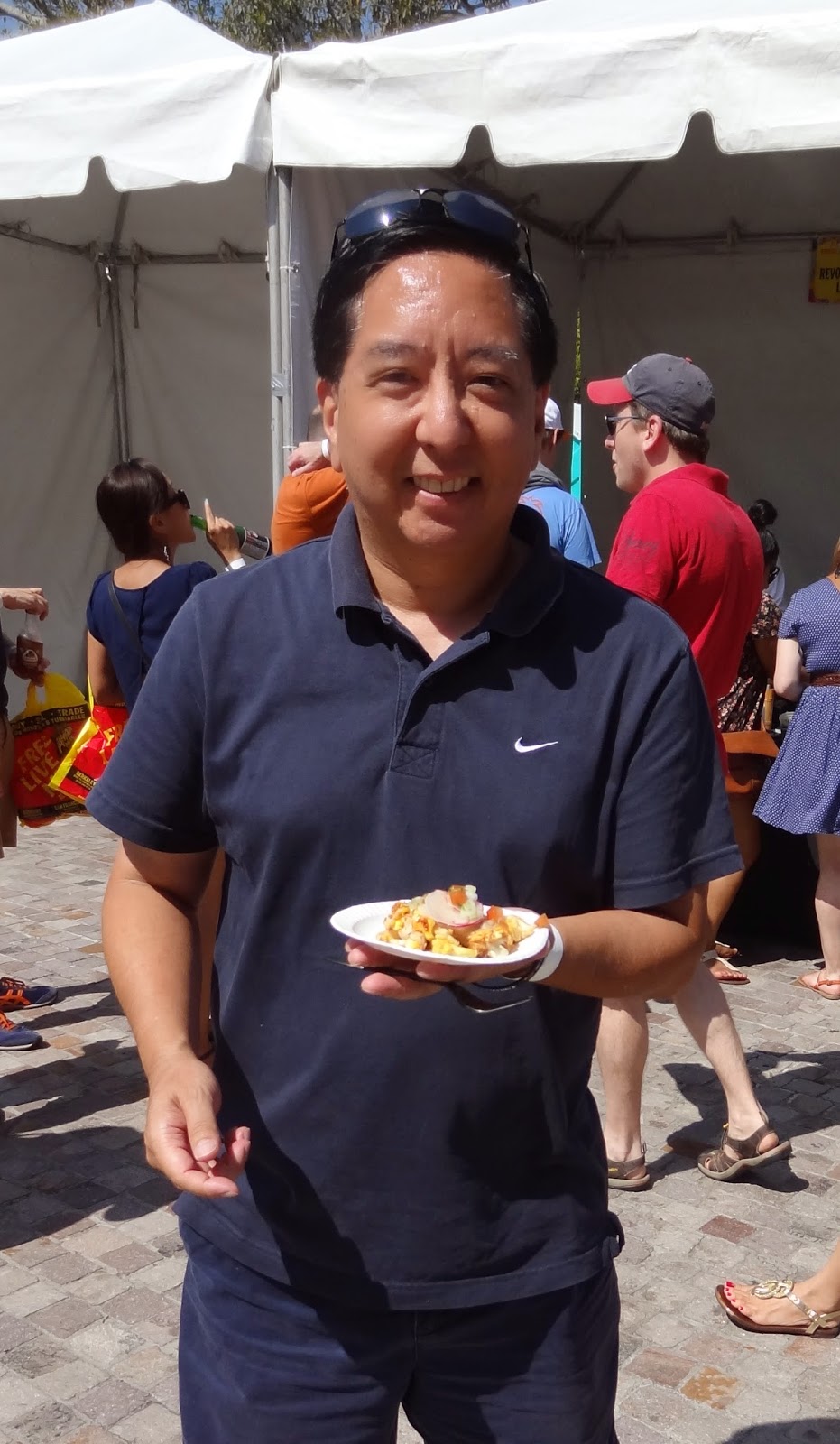 I almost showed up with a white shirt on
to eat tacos... 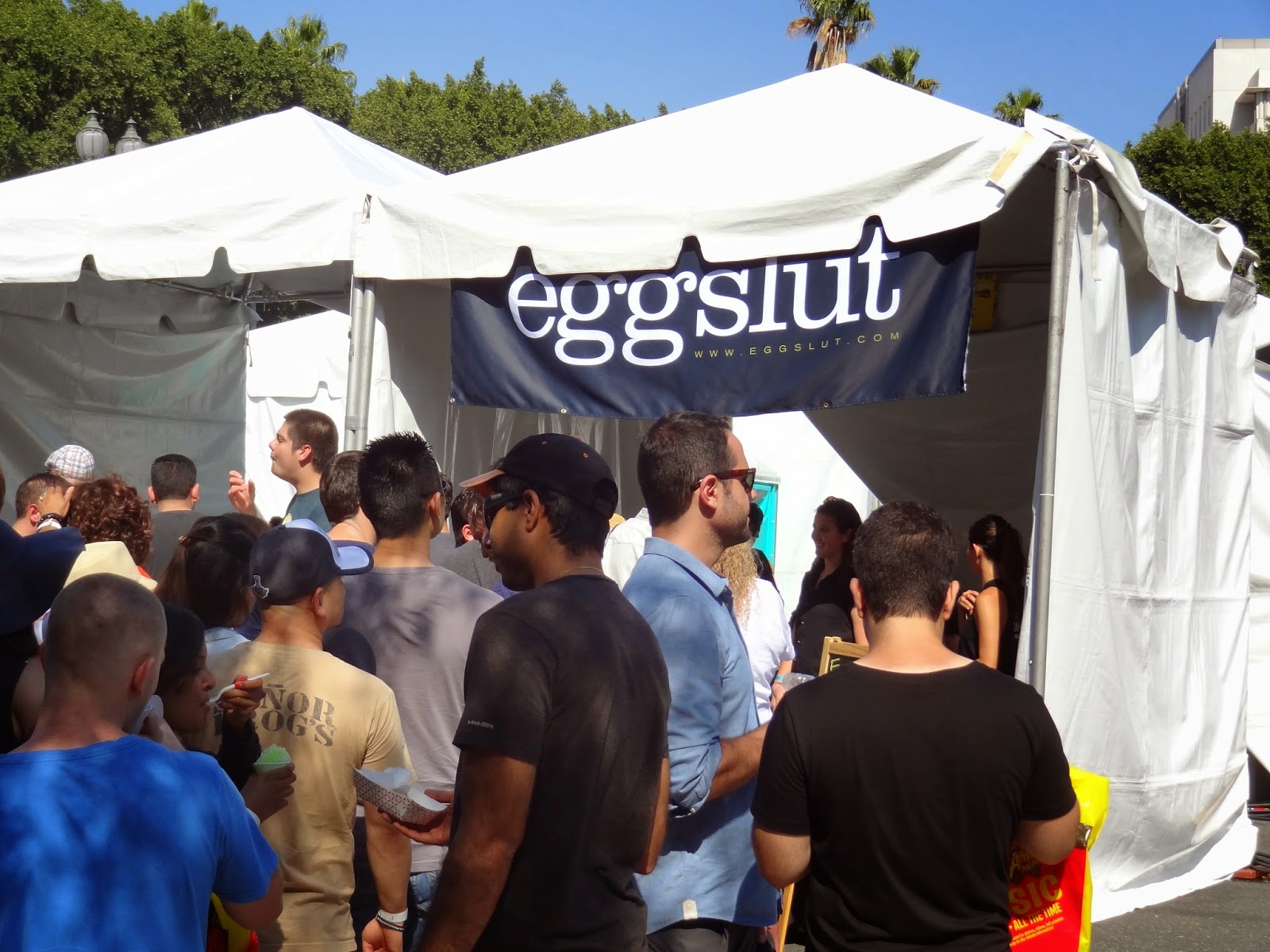 One of two places I wanted to sample their tacos
(other was Guerrilla Tacos)
and the longest line of the day.

I joked with Jeffrey Shimamoto (Ramen Burger),
now is his turn to wait in line for food...
lol 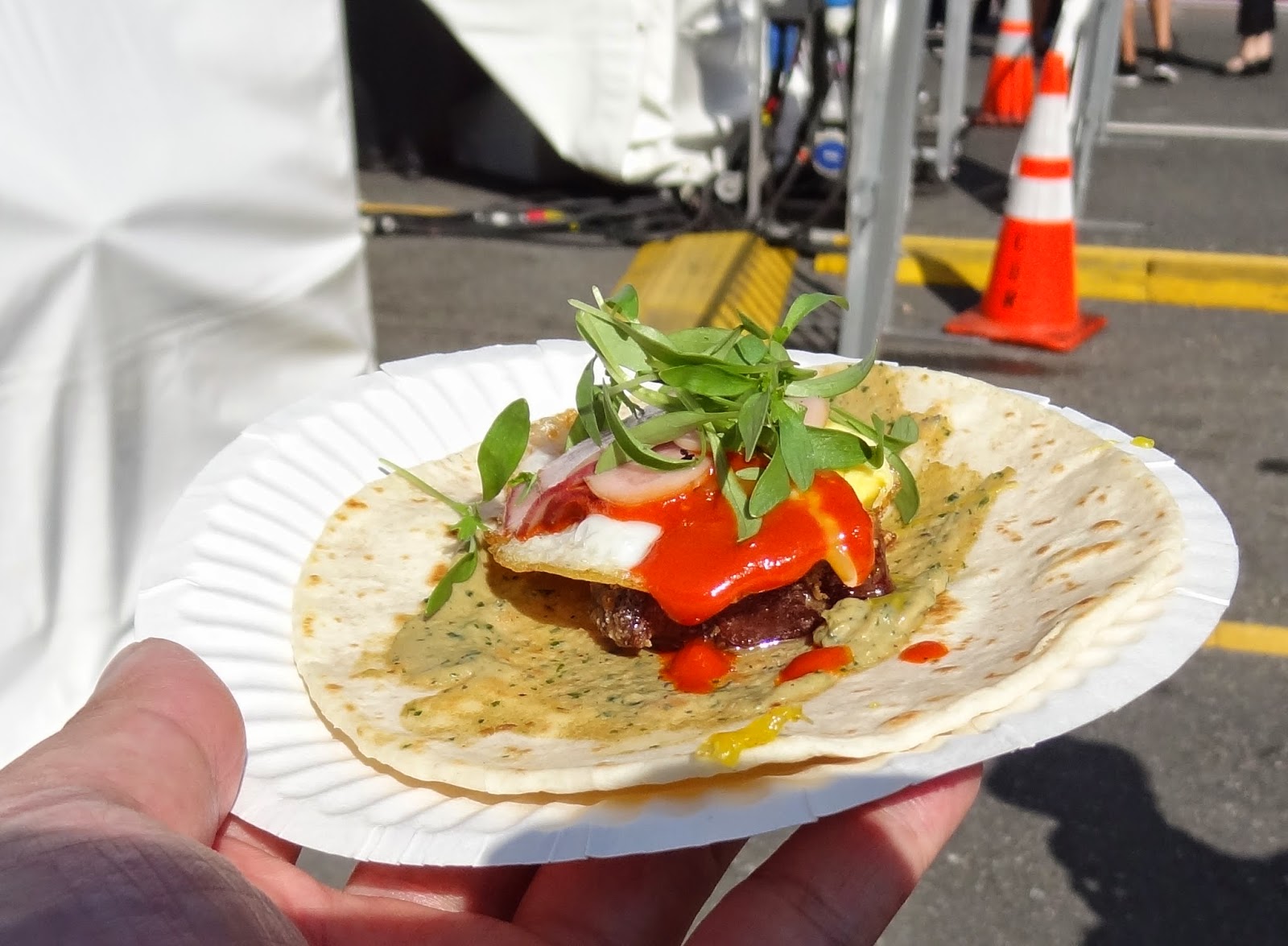 It needed something extra, but I enjoyed it. 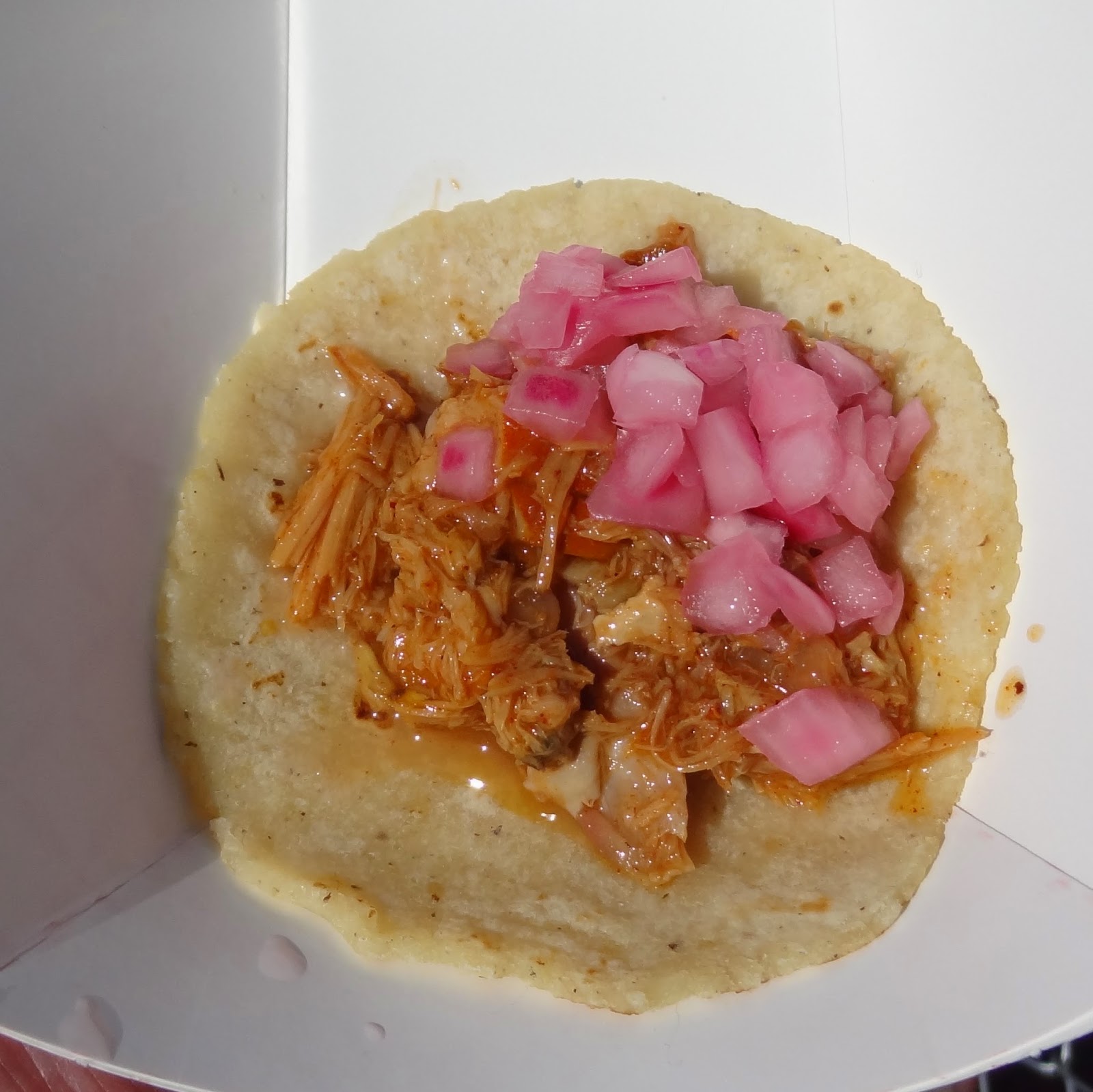 A whole pig marinaded in Orange & Achiote
and roasted in a banana leaf.

This was a good cochinita pibil. 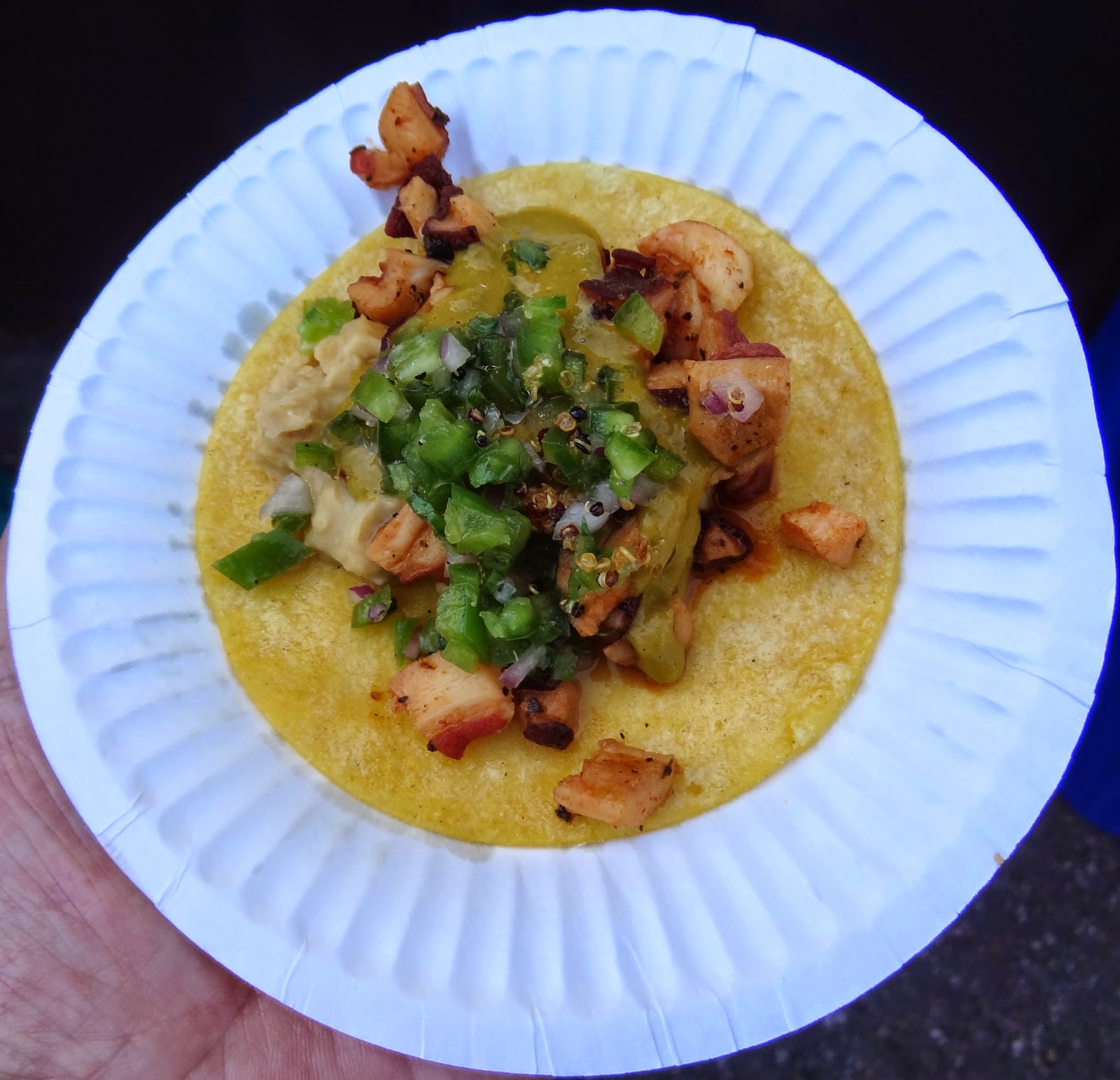 Very tender octopus and one of
my favorites of the day. 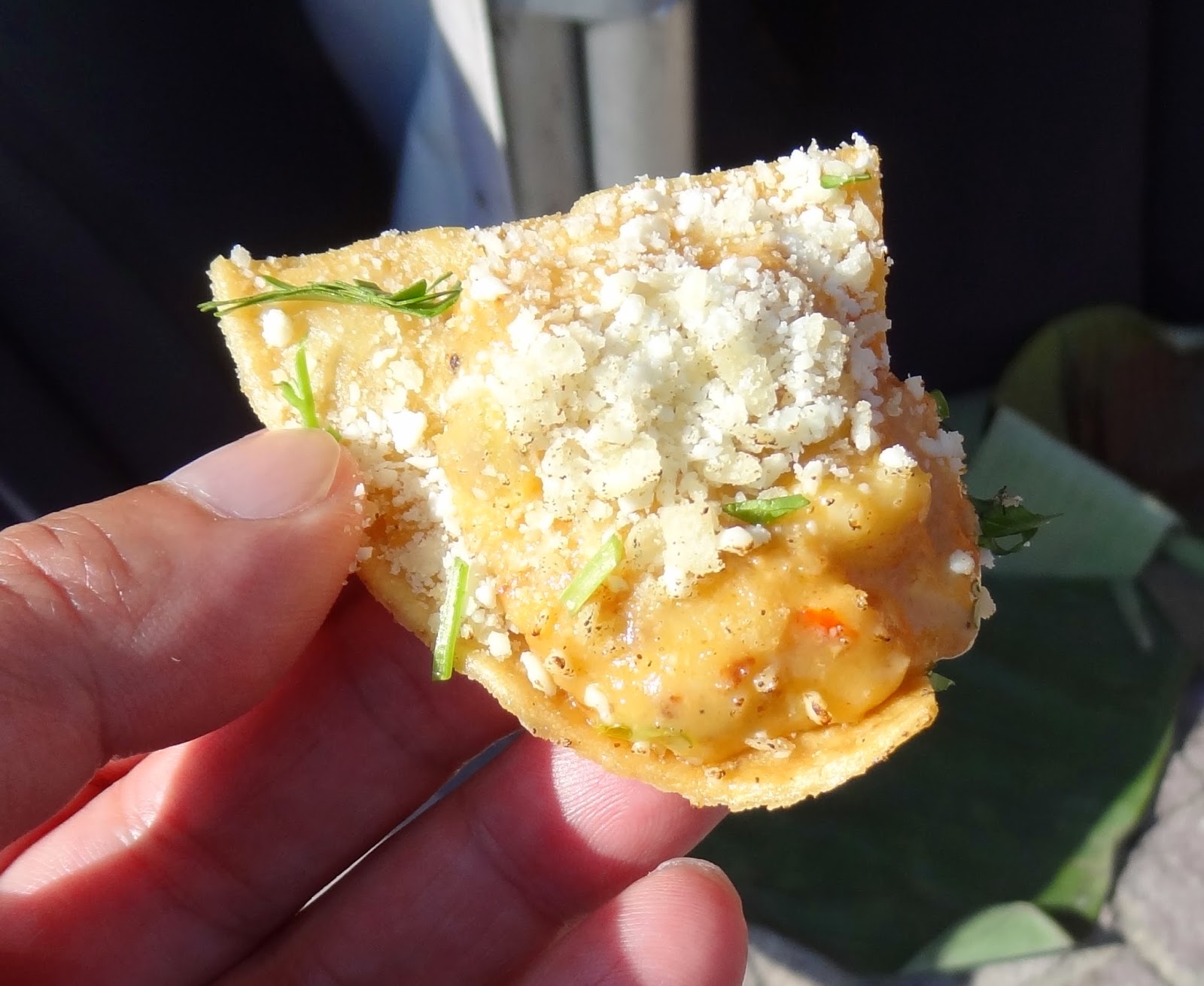 It was small, but tasty 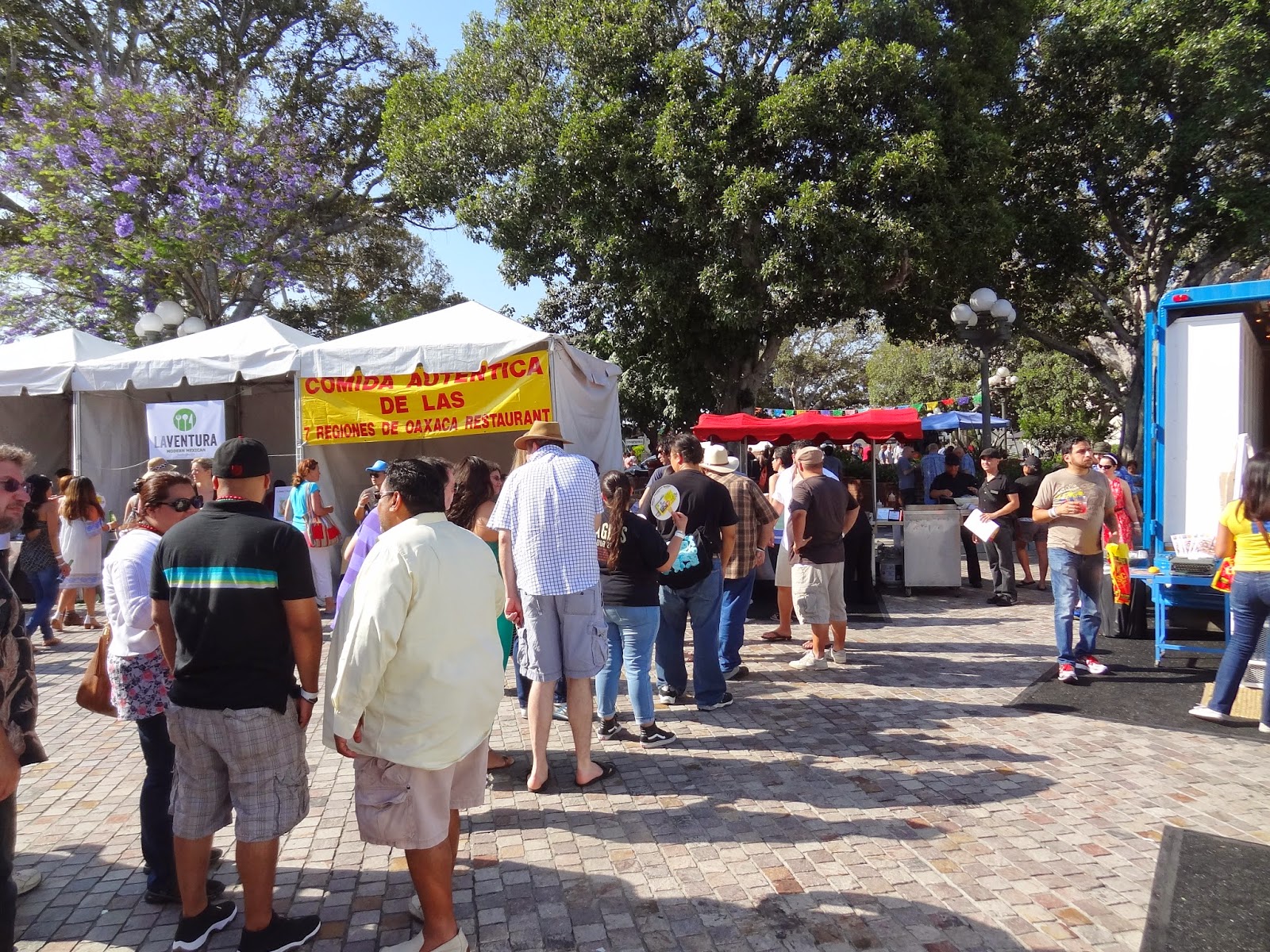 By this time, I lost count on how many tacos we had. 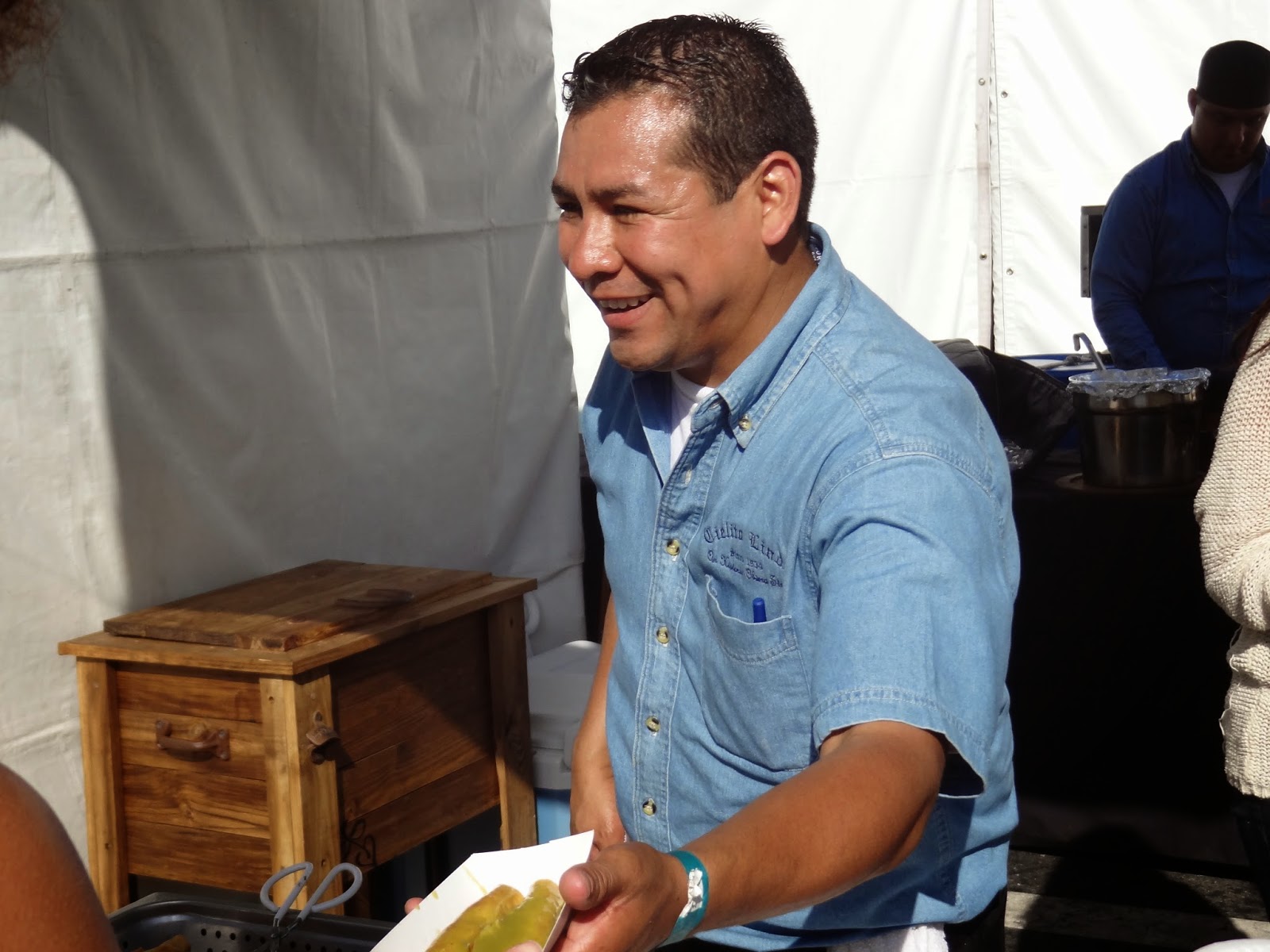 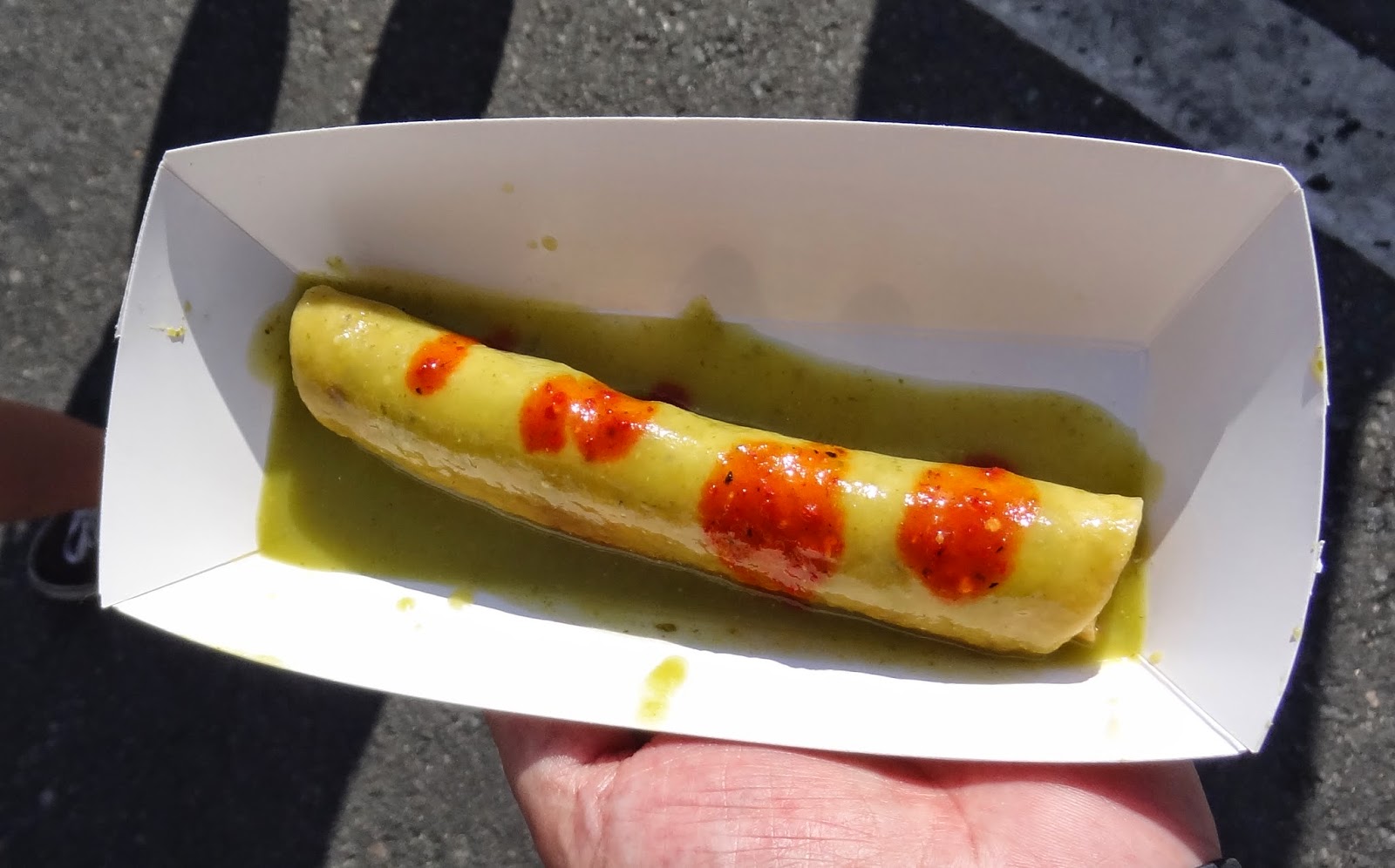 My favorite at Olvera Street,
serving taquitos since 1934.

I was so full, I could only have one,
love the avocado sauce. 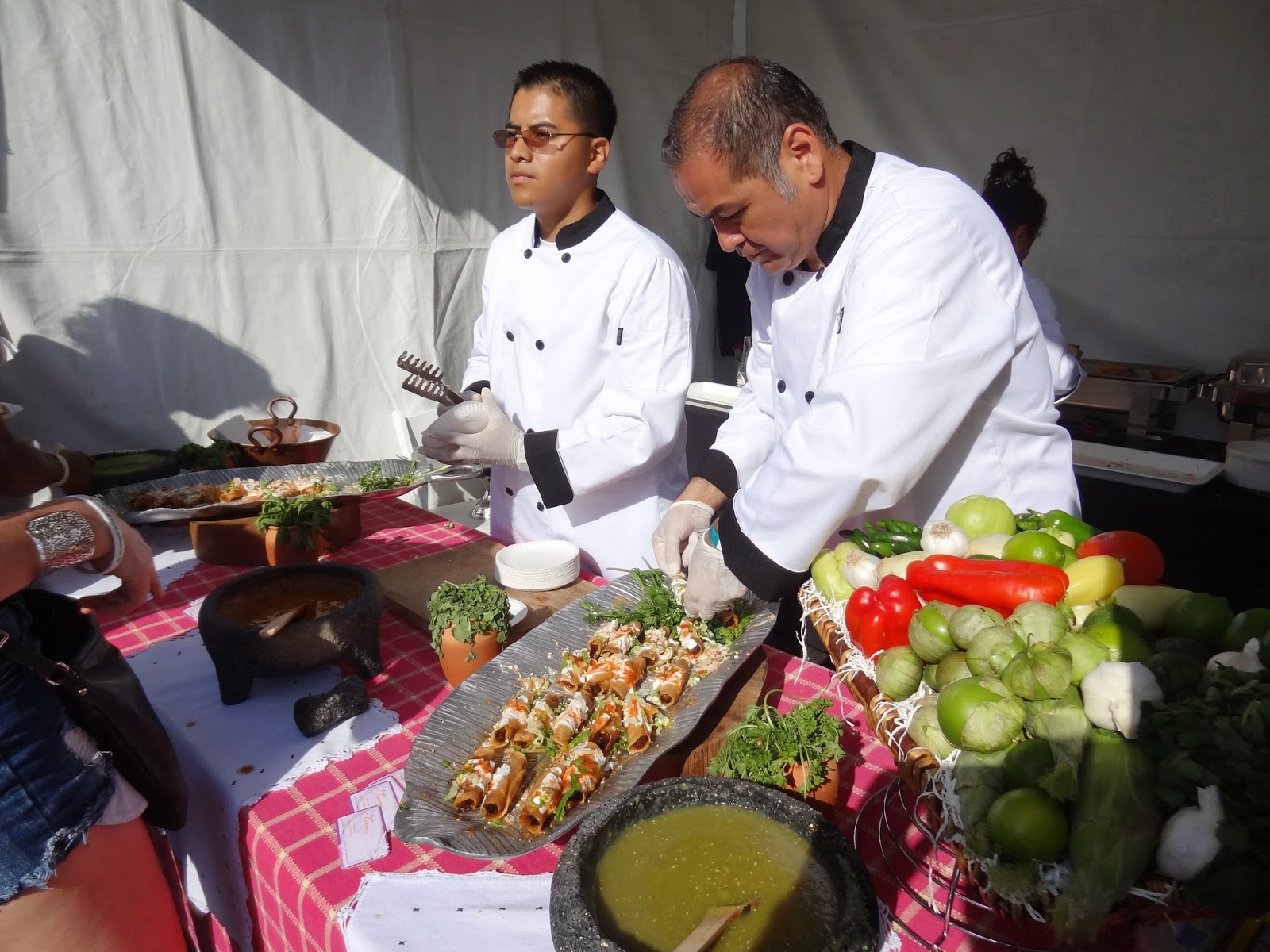 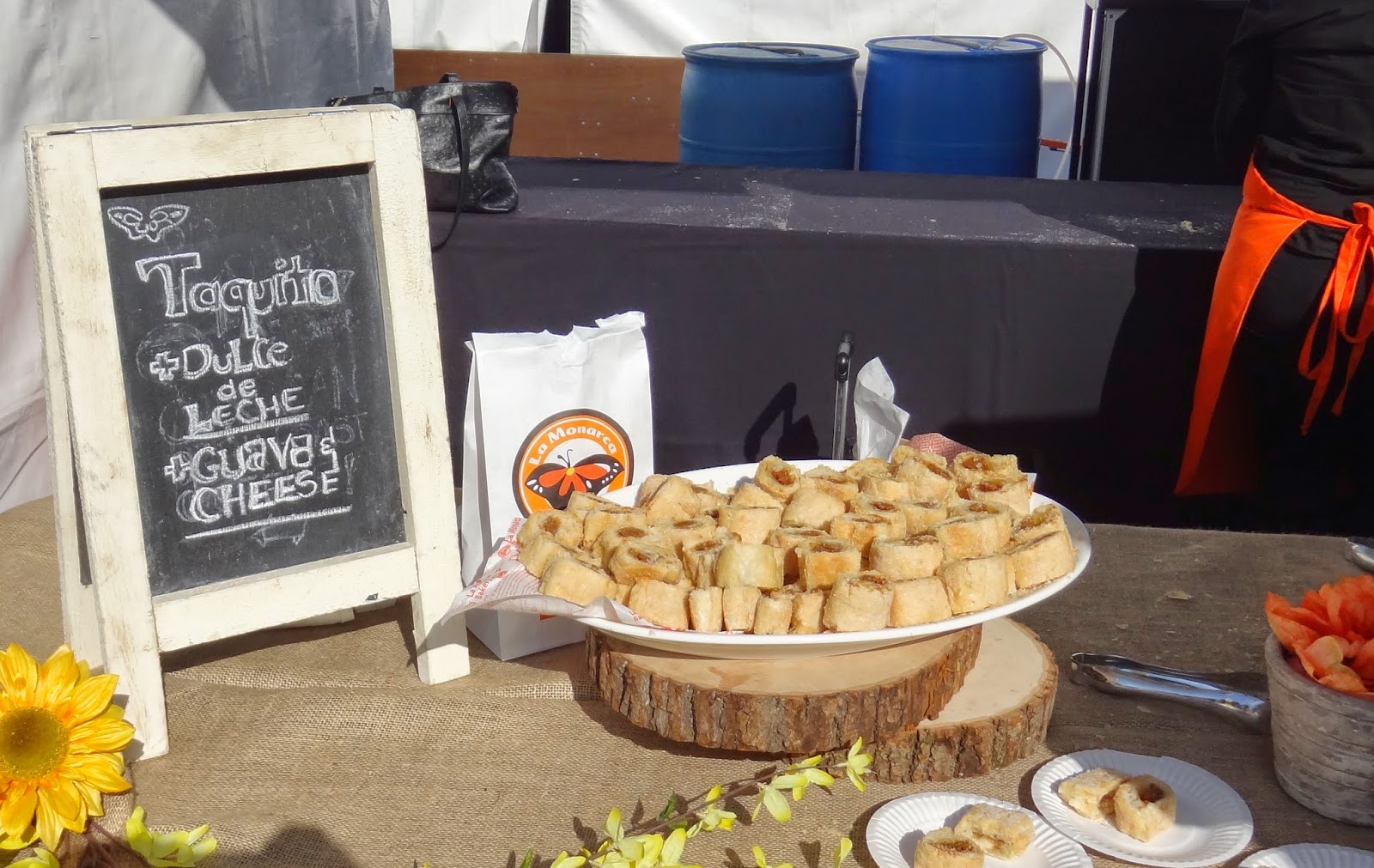 We had to finish off Tacolandia 2014 with dessert!

I was glad to see different ingredients used, from cauliflower
to octopus, and each taco was a unique experience.

Although we didn't get to sample all 40 or so tacos,
we did have a great cross-section of what makes
Los Angeles a great place for tacos.

The salsas and hot sauces ranged from
pretty good heat to WOW, FIRE!
I'm wondering how these don't burn through the bottle.

The only disappointment were the long lines for
beverages, which were longer than the taco lines.

It might have been better to have a booth just
for canned beers, soft drinks, and water.

We hit the drink sample booths to quench our thirst
and the lines were 2-3 people at most.
Besides, I was introduced to some new beverages. 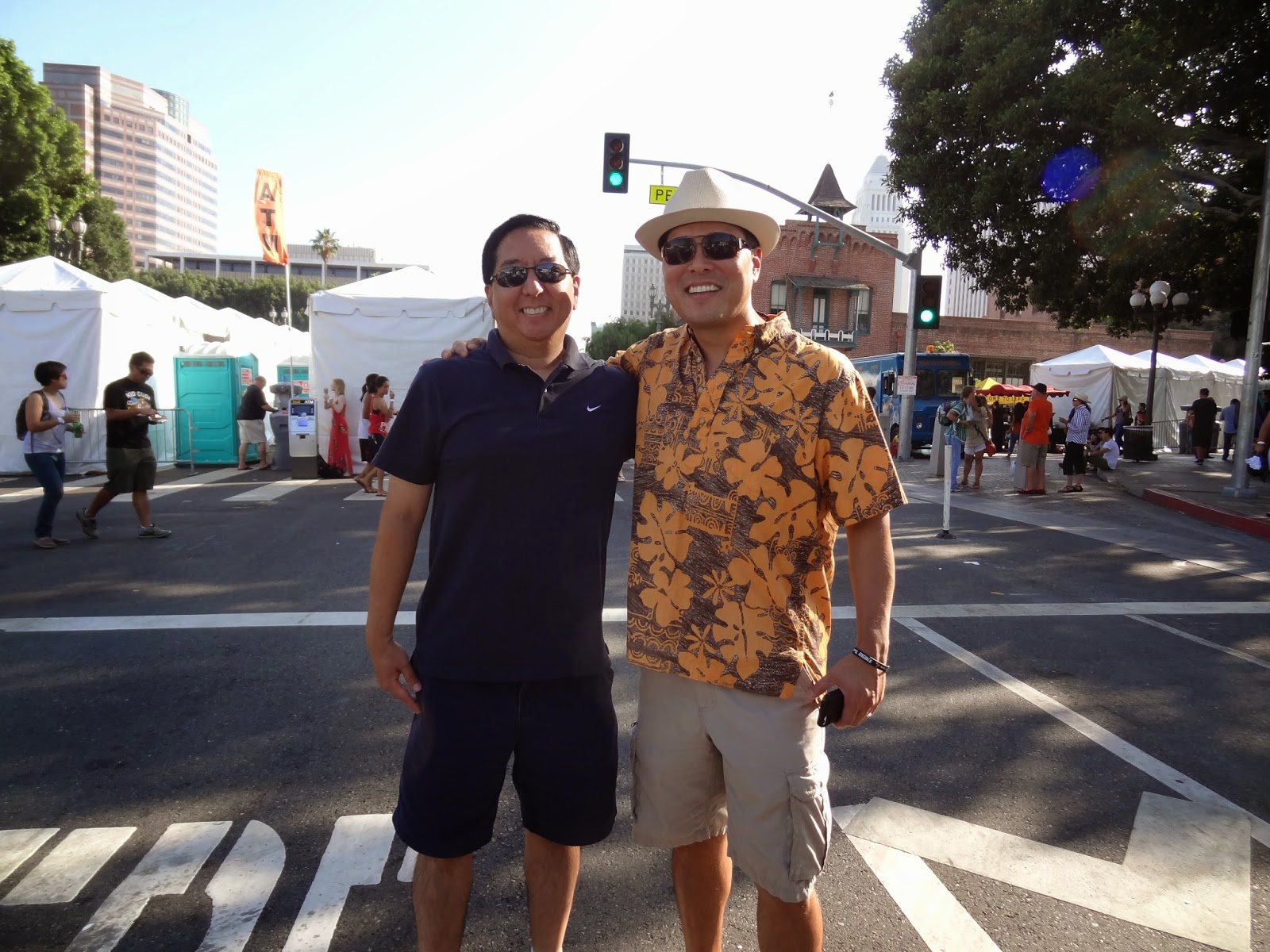 Thanks Jeffrey Shimamoto for the invite!

Does it look like we had 14 tacos?
I lost track of the official count.

I had my fill of tacos today,
good tacos...

Sorry to anyone who calls me within
the next couple of weeks wanting
to go eat tacos.

If you love tacos, I suggest you look for the
LA Weekly Tacolandia 2015
and get tickets early.

streetgourmetla said…
Thanks for coming-you made a wise choice. When in doubt-tacos! We'll work on those drink lines for you-I appreciate the feedback.
July 1, 2014 at 9:30 PM