A Hawaiian Paradise in a Box! 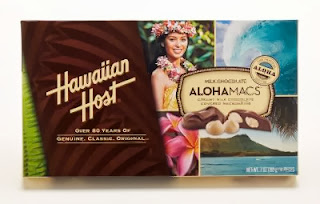 If you've read some of my other posts, you know that I've spent many summer vacations in Hawaii with my grandparents.  We were always sent home with Hawaiian Host chocolate-covered macadamia nut candies.  Hawaii and Hawaiian Host are happy childhood memories. 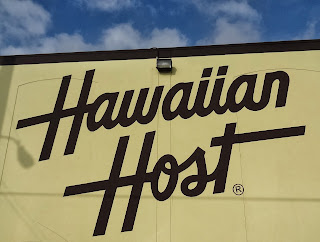 I was invited to see the production of ALOHAMACS, the new product from Hawaiian Host, featuring their new Hostess, Kawehi Navarro.  We were able to see the milk chocolate candies being produced.  More about Kawehi later...

Anytime someone invites me behind the scenes or for a sneak peak to see a new product, I'm always interested, especially if it's chocolate, right?

This time I didn't hop on a plane, but stayed close to home and toured the Los Angeles factory.  You're probably thinking, 'they don't make them in Hawaii?'  Yes, Hawaiian Host has two factories, the corporate headquarters/main plant is located in Honolulu, Hawaii and the mainland facility in the Los Angeles area. 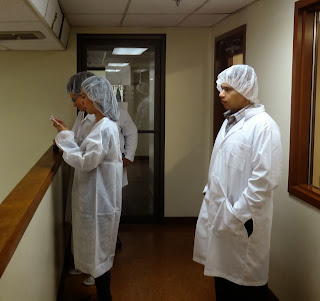 *
When you first walk into the building, there's a pleasant chocolate smell.  If you close your eyes, you can imagine this is what "Willie Wonka and the Chocolate Factory" would smell like.  After suiting up in white coats and hairnets, we hit the air shower before seeing the production line. 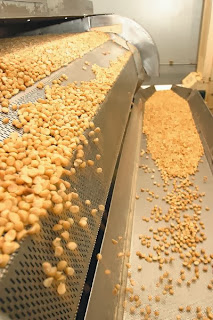 Our first stop was the macadamia nut roaster.  They use macadamia nuts from independent growers on the Big Island of Hawaii.  Hawaiian Host was the first to dry roasts macadamias, which enhances the nutty flavor, other places oil roast their nuts.

Once the macadamias come out of the roaster, they're inspected, sorted, and sent to the chocolate line. 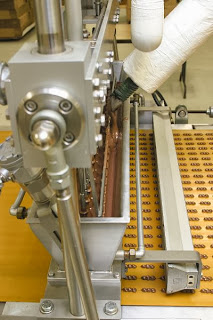 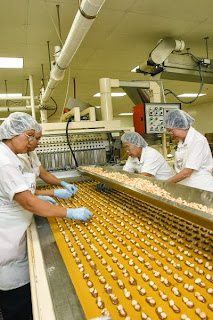 Two macadamia nuts are placed on each chocolate base. 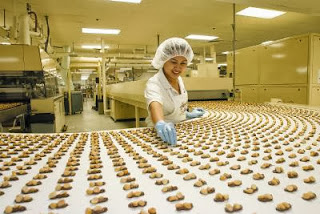 The macadamia bases head to the enrober to be covered in chocolate. 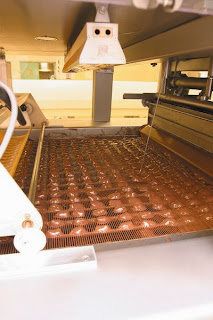 The enrober covers each double nut candy piece in chocolate and the decorator gives them their swirl on top.  After a ride through a cooling tunnel, the candy pieces are ready to be packed. 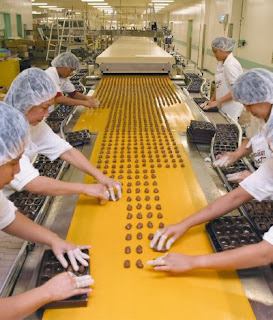 Thoughts of Lucy and Ethel on the candy line...

Each double nut piece of candy is hand-packed in trays, boxed, weighed, inspected, wrapped, and shipped to retail locations around the world.  Hawaiian Host products are sold in 24 different countries. 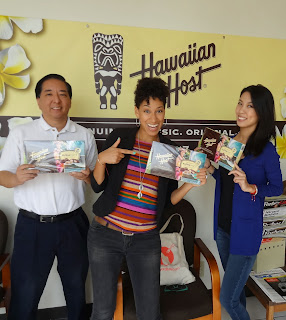 *
After the tour, we were able to take home the finished product.
With Amy T. Shuster (@backyardbite) and Kristie Hang (@kristiehang) 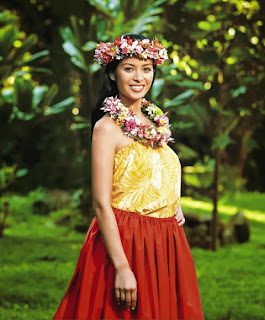 Hawaiian Host held a Facebook contest in 2012 to find their next Hawaiian Hostess.  They received over 500 entries and more than 19,000 fans votes.  10 finalists were interviewed and Kawehi Navarro was selected to be featured on ALOHAMACS boxes.  You can read more about her and the selection process HERE.

Available in Milk or Dark Chocolate
Find out where you can find Hawaiian Host in your area,
or order online at www.hawaiianhost.com

I want to thank Hawaiian Host for the invitation
and to be introduced to your new ALOHAMACS.
Just so you know, I'm always available to visit the
Hawaii facility...