Someone asked me a couple of weeks ago, "what's saimin?"

I grew up on noodles and my nieces are following the family tradition, they love noodles too.  I don't remember having a favorite noodle, except for spaghetti, and what kid doesn't like spaghetti?  Being Asian, we had ramen, soba, somen, and udon noodles growing up.  During my college years, I started eating Korean naengmyeon and Vietnamese pho.

But it was the summers I spent in Hawai'i having saimin that I remember the most and would now have to say was my favorite growing up.  It's probably because it wasn't something found in Los Angeles, except when my grandma would visit and bring frozen S&S Saimin packages for us.  I usually had to wait for the end of school and spending the summers in Hawai'i for saimin. 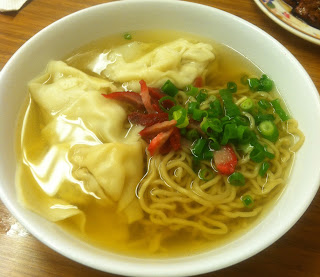 So, what is saimin?

It's really a cross of Chinese, Filipino, Hawaiian, Japanese, Korean, and Portuguese cultures and food.  How did they all get together and create this bowl of noodles?

Back in the plantation days, these groups would sit down and share their lunches with each other, cultures would cross and a new hybrid is born.  It's not a ramen or chicken based broth like you'd find with wonton soup, it's a base of dried shrimp and a protein such as chicken.  The toppings are simple, some slices of bbq pork, fish cake, and some green onions. 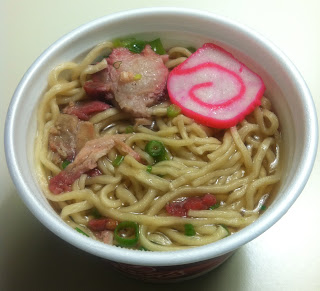 It's such a staple in Hawai'i,
it's on the regular menu at McDonalds
and has been for many many years. 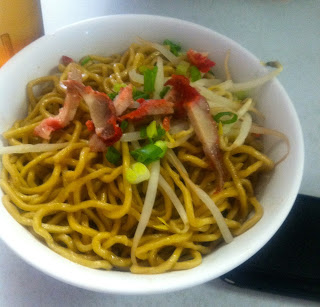 Served with a side of soup for dipping
or eat it like me "dry", hence
the name...

I will say, if you do not like dry noodles,
you might want to order something else.

Save room for their manju,
a Japanese confection
with a sweet bean filing. 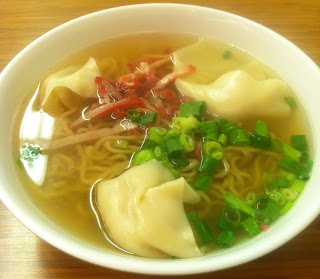 My favorite saimin place on Oahu
and they stay open late... 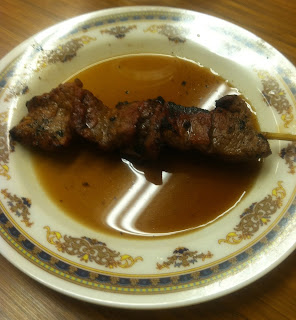 Best way to eat saimin is with bbq beef sticks

Located in an industrial area, just look for all of the
cars and the line of people and you've found it.
Save room for the Lilikoi Chiffon pie.
They're also a James Beard Foundation
award winning establishment,
how could you not go?

JacquelineC said…
When I was a kid in Hawai'i we ate saimin all the time. I didn't learn about "ramen" until later! I never knew that there was a difference in the broth! Dying now for saimin but it's so stinking hot here, going with somen today. I made dipping sauce from Nancy Singleton Hachisu's Japanese Farm Food - do you know it? Bet you'll love it.
Itadakimasu!
July 18, 2013 at 7:09 AM