Hawaii: The Bounty of He'eia I

Kamehameha Schools Presents "The Bounty of He'eia", an excursion of the Hawai'i Food and Wine Festival.  This outing was brought back by popular demand and I'm glad they did, I missed out last year.  The first part of the day was held at the He'eia Fishpond, located on the Windward side of O'ahu.

We headed over to the He'eia ahupua'a and Paepae o He'eia.  Ahupua'a is a land division, often extended from the mountains (mauka) down to the ocean (makai) and provided everything needed for a sustainable lifestyle.

The ancient fishpond known as Paepae o He'eia was our first stop.  Run by a private non-profit organization is dedicated to the caring for the fishpond.  Paepae o He'eia works in partnership with the landowner, Kamehameha Schools, to manage and maintain He'eia Fishpond for education and also the community. 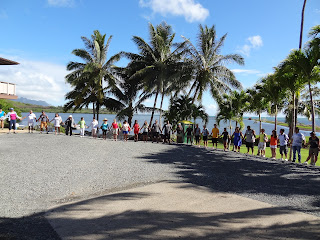 We began this beautiful morning together before
heading out to see the 88 acre fishpond. 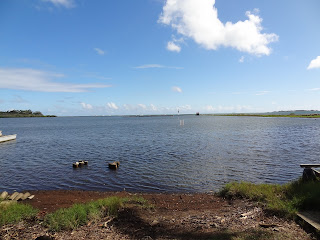 The fishpond is located next to Kane'ohe Bay
and fresh water is from the He'eia stream. 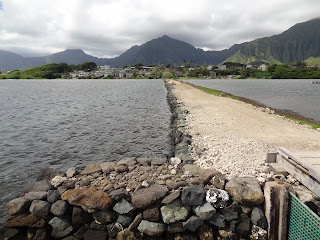 This 600 year old fishpond is encircled by a 1.3 mile
seawall made from rock and crushed coral.

Hard to believe that something 600 years old
is still in operation today,
talk about old skool craftsmanship... 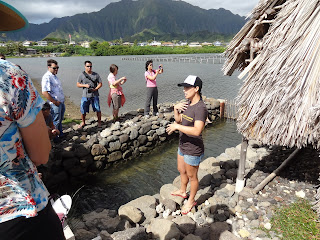 In a nutshell, here's how a fishpond works:
Small fish swim in from the ocean through the gates into
the fishpond. The fish feed on the plants and grow to sizes
too big to fit through the gates.  When the tide changes,
they want to swim towards the ocean.  The inside pond
gate is opened and fish swim into the inlet and the gate
is closed behind them.  You can take the fish you need.

Can it get any easier?

OR you can go into the ocean
and try to catch fish that way.
But why?

This is why fishponds are so valuable
and sustainable...

Audience Participation Time!
Who here has cleaned fish before?
Hello, is this thing on??? 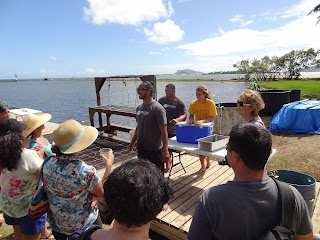 We're getting our instructions on how to clean
moi OR we don't get to eat lunch.

Moi is one of the fish raised at the fishpond.
They were harvested the day before.

Moi is a Pacific Threadfin and is found in
tropical to subtropical waters throughout the world.
Moi was once reserved for the ali'i (Hawaiian royalty)
and one of my favorite fish from Hawaii. 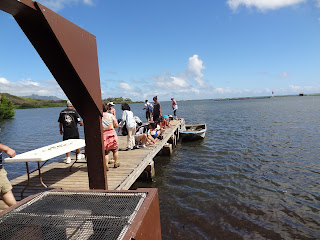 Scraping off the scales

Although I have experience prepping fish,
everyone participated and did a good job.

Guess they wanted to eat... 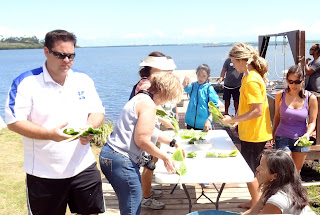 After the fish was scaled and cleaned,
they were salted and wrapped in ti leaves. 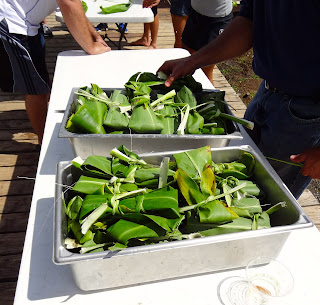 Now that the 'audience participation' portion of the event was over... 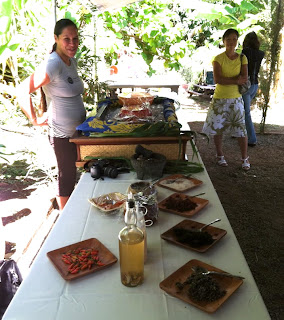 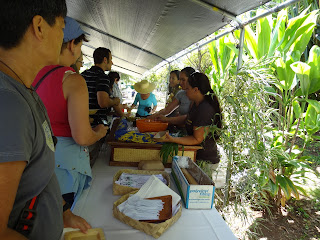 If you've followed me in the past, you know I love
poke and even competed in the Sam Choy's Poke Festival
on the Big Island years ago.  Poke in Hawaiian is "to slice
or cut" and is a raw seafood appetizer.  Today, most
poke you'll find consists of cubed tuna, marinated with
salt and small amounts of soy sauce, sesame oil, limu
seaweed, inamona (roasted crushed kukui nuts),
and chili pepper. 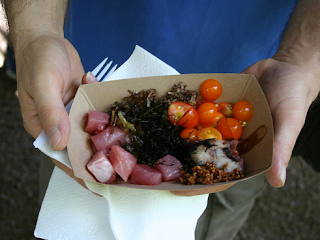 I would have been fine just eating
poke today, but I knew that more
food was being prepared at the
next stop...

When you live on an island, sustainability is a way of
life.  Rather than to reinvent the sustainable wheel,
we should continue to learn what the ancient Hawaiians
did to survive and keep these food sources for
generations to come.


NOTE:  I was a guest of the Hawai'i Visitors and Convention Bureau,
O'ahu Visitors Bureau, and their partners.
I thank them for their invitation and hospitality.
All comments and opinions are strictly my own.