July 23, 2011
My friend Keizo was in town from Japan this week, some of you might follow his blog GO RAMEN. It's been over a year since Keizo moved to Tokyo to study ramen, he's trained at some of the top ramen shops in Japan. But today, we met up for ramen at Zenya to catch up. Funny thing, he lives in Tokyo and knew about this New place in Torrance which just opened a week ago. Go figure...
Before we ordered, Keizo mentioned that Zenya's specialty is the Tonkotsu Ramen, the pork broth soup base. After the server took our drink order, we were told that they have no more Tonkotsu. WTH? It's 1:30 pm on a Saturday. I could understand if it was 10 pm on a Saturday, but lunch?
You could already tell that I'm not a happy camper, nor a Shio Ramen fan. They only have two types of ramen broth on the menu and their specialty was SOLD OUT. 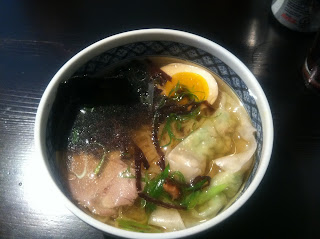 Shio Ramen
Half Order
$5.50
Since my first choice was unavailable, I opted for the half order Shio and small order of the Zenya tonkatsu over rice. 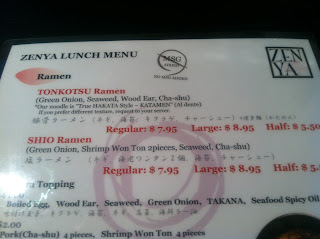 Since they were out of the Tonkotsu Ramen,
they offered us a FREE topping.
According to their menu, No MSG added...
The broth was OK, but the noodles had a dry powdery taste to it. Granted, they opened a week ago, I won't hold it against them. The place was packed, but service was attentive and well trained, at least the ones who work on Saturday. 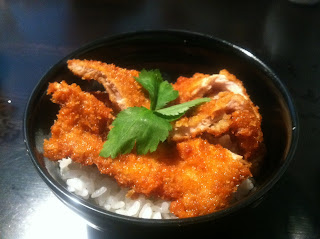 Rachael Hutchings said…
I can't believe they were sold out! If you are only going to offer two types of ramen broth on your menu, it's ridiculous to run out, especially at lunch time! Too bad. Is it worth a trip back to try out the tonkotsu broth?
July 26, 2011 at 7:15 PM

Jay Eats said…
Me neither...

On one hand, I understand that the restaurant had only been open for one week. But on the other, as you had mentioned, they only have two selections on the menu. Being in the business, I'm really not that hard on new restaurants, but come on, only two selections...