July 17, 2011
It's that time of the week again...Ramen Monday!
Had to head down to San Diego to take care of some business and a lunch meeting at Tajima. Some may think I was avoiding Carmageddon - Day 2, but I did have some business in SD. Hidden between car dealerships and Korean restaurants, this restaurant is tucked away at the end of a strip mall.
Before heading down to SD, I checked my buddy's website on Tajima. His recommendation was to stick with the shoyu ramen, which was better than the tonkotsu one.
I took his advice and ordered the Original Tajima Ramen with the soy sauce base and thin noodles, other choice is a thicker noodle. Thanks Keizo! 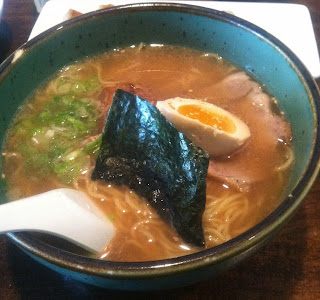 Original Tajima Ramen
Shoyu
Thin Noodles
$6.96
The broth was good and the noodles well cooked. I did overhear other customers ordering the same but wanted it spicy. The bowl included one slice of chasu (pork), half a boiled egg, sheet of nori, and green onions. I did do an add on... 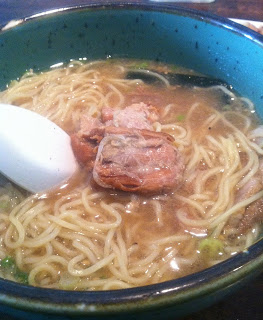 I added the Kakuni Pork
$3.00
Half of the pork belly was dry and overcooked, but the fattier piece was just right. It wasn't good as Yamadaya in Torrance and I could have done without it. 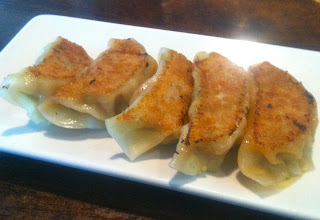 6 Piece Gyoza
$4.50
The gyoza was good, they bring the sauce in a bowl, no chili oil on the tables.
If I was in the area again, I would probably go back. The service was good, very attentive on ice tea refills. The only thing I didn't like, they had the World Cup match on TV. The meeting went well, but I didn't want to watch, since I was recording it at home.
Funny thing, I stayed away from social media during and after the match. Listened to the baseball game on the way home, knowing that they wouldn't give the score. But, was notified on my phone that Japan had won. Thanks ABC7! Rootin' for Team USA, but Japan played a great tournament... 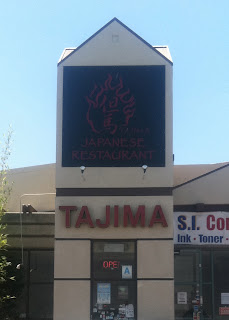