June 14, 2011
June 18th is International Sushi Day! Not sure what that means...
Here in Los Angeles, we have two originals that have been a worldwide sensation for over 20 years. Not many people know this, but the California Roll and Spicy Tuna didn't come from Japan, they're native to the Los Angeles area.
In the late 60's, the California Roll was created in a restaurant in Little Tokyo in Downtown Los Angeles. The sushi chef at Tokyo Kaikan was brilliant! He took ingredients that Americans would eat (crab, avocado, and cucumber), rolled it with the rice on the outside (hiding the black seaweed) and gave it an American name. This my friend is how the sushi boom began... 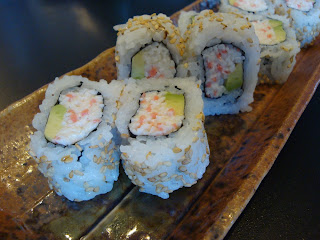 The Famous California Roll
Created by Tokyo Kaikan
Los Angeles
It would be considered a sin to add ingredients to fresh tuna in Japan. Remember, Japanese food is simple, subtle, and seasonal, and they really don't eat spicy food. Japan is not known for spicy foods, they leave that to China, Korea, Thailand, Vietnam, etc.