May 08, 2011
May 11th
is
National Spicy Tuna Day!
Just as the California Roll was created at Tokyo Kaikan in the Little Tokyo district of Los Angeles, Spicy Tuna was said to be created at Sushi Iroha in Studio City. Not sure when that was, but my guess was sometime in the 1980's.

Spicy Tuna Roll
Sushi Dragon
They don't eat spicy tuna in Japan, it would be considered a sin to eat tuna seasoned in this manner. And when they do eat a roll, it's very traditional with the seaweed on the outside. The reason why the Tokyo Kaikan chefs rolled it inside-out, back in the late 60's early 70's, Americans wouldn't eat a black piece of paper (seaweed) so they hid it.
Japanese cuisine is simple, seasonal, and subtle. Since Japanese food is simple and subtle, they don't really eat anything spicy, so why look to Japanese cuisine for anything spicy? I think it's really funny that a cuisine that isn't known for spicy foods, has a popular item that is called "spicy tuna". 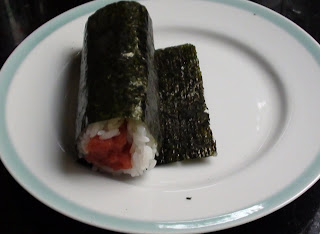