May 15, 2011
I was fortunate to grow up near Downtown LA. One of my fondest memories was being able to go to all of the old time food places in the area, one of the most famous is Original Tommy's on Beverly and Rampart.
My dad would take us to the original location and we got to eat sitting in a parking lot. Who knew that eating on the sidewalk or in a parking lot would be considered 'trendy' back then as it is today with all of the gourmet food trucks. Tommy's was one of the places where everyone headed to after a game or concert, people in line would be talking about the game or concert.
But today, Original Tommy's is celebrating their 65th Anniversary. 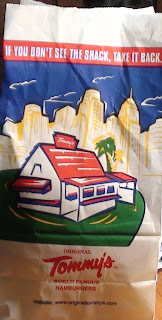 On May 15th, 1946, Tommy Koulax opened his corner shack and introduced his style of hamburger to Los Angeles. Who knew that today, the shack is still there on the corner, there are overflow parking lots across the street, and people still eat standing up on one of the many counters, wiping their mouths with paper towels. Tommy served his hamburgers with chips and bottled sodas, not sure what he'll think of the french fries served today.
But today, Original Tommy's is celebrating the 65th Anniversary with an Original Tommy's chili cheeseburger and a Coca-Cola for 65 cents, only at the Beverly and Rampart location. 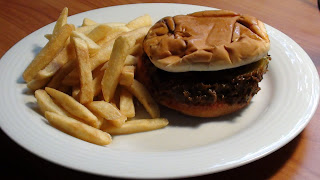 Unfortunately, I won't be able to get out to the Original location today, busy with client projects. I'll miss the USC Trojan Marching Band, but I did head to the Original Tommy's in my area to join in on the celebration. But I was there for the 50th and 55th Anniversaries...
Didn't get one for 65 cents, but did get a coupon for a FREE chili cheeseburger next time!