April 24, 2011
While the world watches the Royal Wedding today, I'm wondering why they're not serving "Fried Artichokes and Chips" at the reception? LOL!
One of my favorite vegetable is the artichoke, had to look it up to be sure it's a vegetable. I like them marinated on an antipasti platter, with pasta, in sandwiches, and on pizza. At the food shows, you'll usually find me sampling all of the the marinated artichokes, including the Roman-Style ones too.
Most places don't know what to do with artichokes, except for taking them out of a can. Most people eat artichokes steamed. But for those who've seen the movie "Sideways" and have been to the "Hitching Post II" know about the grilled artichokes served with the smoked tomato mayo. One of the best grilled artichokes I've had. 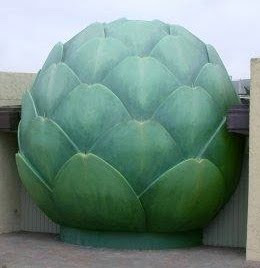 World's Largest Artichoke
Giant Artichoke Restaurant
Castroville, California
I went up to Northern California to visit family during the Easter weekend and made a detour through Castroville, the artichoke capital of the world. It's been awhile since I last traveled through town and had some fried artichoke hearts at one of the many places around town that served them. I happened to drive right by the Giant Artichoke Restaurant and saw that the parking lot was pretty empty, so I stopped. Usually the parking lot is filled with tour buses in front of the produce stand and gift shop, but it was early and there was parking. I ordered a sandwich and some fried artichokes to go, wanted to get home in time for the Laker game. After seeing how they played during Game 4, shouldn't have been in a hurry to get home... 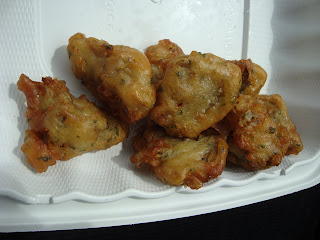 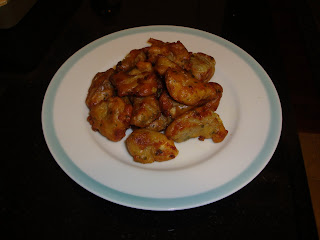 At home with some Ranch Dressing
The fried artichokes were just as good later that evening, this time served with a side of ranch dressing. Didn't think to ask for ranch at the restaurant...Next time...
Overall it was a nice detour on the way home and a chance to eat something that I haven't had in years and it was FRIED!
Would love to hear your comments and I'm always interested in hearing about any unique food places like this...
Happy Fryday!
Giant Artichoke Restaurant
11261 Merritt Street
Castroville, CA 95012
(831) 633-3501

Anonymous said…
i really like the article please keep it up.
restaurant address
May 5, 2011 at 6:05 AM