Not a Whale Tale 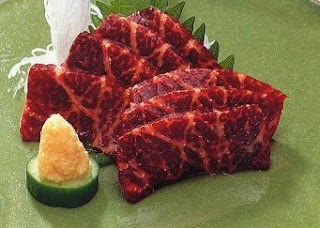 Whales have been in the news lately, a Killer Whale trainer dies at Sea World in Orlando and a trendy sushi restaurant in LA is caught serving whale meat. The Hump in Santa Monica is being investigated for illegally serving Sei whale, which is endangered. A few people have asked me what I thought about serving whale meat? Besides being illegal in many places in the world, the taste in my opinion is HORRIBLE; I did try piece of whale meat while visiting Japan in 2001. The taste was very gamey, after all it’s a huge wild animal. I didn’t like it at all and even said I would donate money to save the whales when I got home, I did by the way make a donation. I remember it was on the expensive side too, 6 slices for about $15 (retail), I can imagine it would be doubled or tripled in a restaurant.

In my opinion, there’s so much legal exotic seafood out there, it depends on a chef’s skill and experience. The term “sushi chef” is used too often in my opinion. A chef is someone who can create imaginative dishes and who has experience with all kinds of ingredients

My guess is The Hump had pressure to increase revenue by impressing their “Omakase” clients with exotic dishes. At this level, customers would spend in excess of $500 per visit. “Omakase” means chefs choice, the chef serving the very best of the day to his diners. It’s been 10 years since I’ve been to The Hump, they should’ve improved their service to increase revenue. Now, they have a PR nightmare on their hands. Heard the other day that they had protesters in front of their restaurant.

I can understand the many cultures around the world that do things because of the tradition that goes back hundreds of years. I can’t understand why something so cherished and honored, such as whales on the endangered species list, would continued to be hunted. Once they’re gone, they’re gone… HELLO!

The same fate will happen with Bluefin tuna. Over the years, sushi chefs have taught customers that they need to have the very best tuna and now customers demand it. I haven’t ordered Bluefin tuna in about 3 years now. As someone who has sushi experience and knowledge, I could never understand purchasing expensive tuna, only to see customers use so much wasabi that they couldn’t taste the flavor anyway. I would watch customers in amazement spend $18 for toro sushi and then dunk it in a wasabi and soy sauce paste. How can you taste this fatty piece of tuna while you get a wasabi blast? Give me $20 and I’ll give you a huge bowl of rice, an entire can of tuna, soy sauce and wasabi, it’ll taste the same…

Sushi began with local fish. Edomae sushi (Tokyo style) which is the precursor to today’s nigiri sushi, used all local seafood from Tokyo Bay. Others have told me that traditional sushi is destroying the oceans and depleting the Bluefins. Originally, traditional sushi comes from using local fish. We have to go back to the sushi roots and it all begins with local seafood.

JacquelineC said…
I love the quote from the NYT article on Hump: "you should not be able to go into a restaurant and order a plate of endangered species."

Also saw interview clip with Director of Cove. He said exposure of Hump was greater thrill than the Oscar!